The maximum distance I walk on a daily basis is to a restaurant nearby office for lunch and back. Once in while when I go for hikes with my friends in the outskirts of Kathmandu valley, I’m often the last one to reach the destination. So, a couple of weeks ago, when my family and friends proposed a trek to Gosainkunda, I quickly went on Google to search for images of the trail and read about people’s trekking experiences, as well as watched videos of Gosainkunda on YouTube. Watching the videos made me want to go on the trek because I realized, that to walk for around 30 hours in just three days, I’d really have to push myself.

It took us almost five hours to reach Dhunche in Rasuwa from Kathmandu due to the bumpy roads. For the first night, we had planned to stay in Chandanbari so we started walking at noon after two hours of rest in the district headquarters. We knew that it was going to be an uphill trail to Gosainkunda as we had to climb up to 4,380 meters starting from 2,000 meters where a four-wheeler had dropped us.

As we left Dhunche, lush green forests, flowing rivers, and gorgeous waterfalls accompanied by the non-stop chirping and singing of birds made for a pleasant trek. The weather was also on our side with a partly cloudy sky shielding us from the heat. But we were all amateur trekkers so we had to rest after a few minutes of walking, and this was the case for all the three days of our journey.

We finally reached Chandanbari, our first day destination, after walking for eight hours.Chandanbari is located at an altitude of 3,300 meters. And, much to our surprise, it had quite a few hotels, and a government-owned cheese factory as well.The view of the sunrise from here was breathtaking.

The second day was the toughest of the trip as we were approaching higher altitude. Many people we met on the way would warn us to be wary of any altitude sickness symptoms. Scarier was the fact that, in the entire route, there were no medical centers if one of us were to suffer from altitude sickness. If the medicine we had didn’t work, the only option we would have was to descend.

I kept checking my breathing pattern that fastened as we climbed but nothing serious happened to make me miss the stunning view. While walking through the Langtang National Park I kept hoping I’d spot a red panda and I thoroughly enjoyedcoming across flora and fauna I had never seen before.

We reached the lake on a Saturday afternoon and spent a couple of hours in the serene surrounding that gave off a mysterious vibe. Perhaps that was also because we knew that the lake held a religious significance. The myth is that Gosainkunda was formed after Lord Shiva dug the land with a trishul in search of cold water to quench his thirst after drinking poison during samudramanthan. The Trishuliriver originates from this lake.

After a few well-spent hours around the lake, it was time to go back for a night stay in Lauribinayak. People often avoid staying around the lake area due to the fear of suffering from altitude sickness. The third day of the trip entailed a relaxed downhill trek to get back to Dhunche and then to Kathmandu.

This strenuous trek has given me the confidence that I can attempt even more difficult ones in the future and I definitely plan to go on more treks from now on. I’d highly recommend the Gosainkunda trek to anyone wanting to challenge their adventurous side, and willing to spend a couple of days walking. 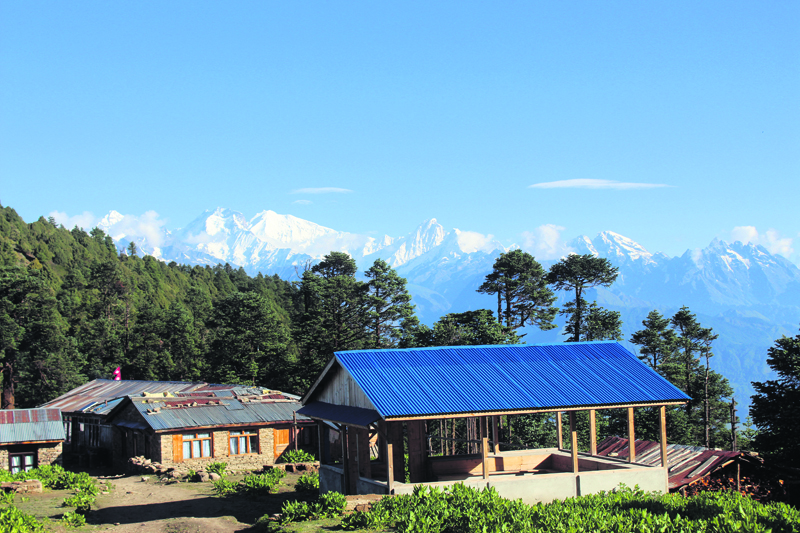