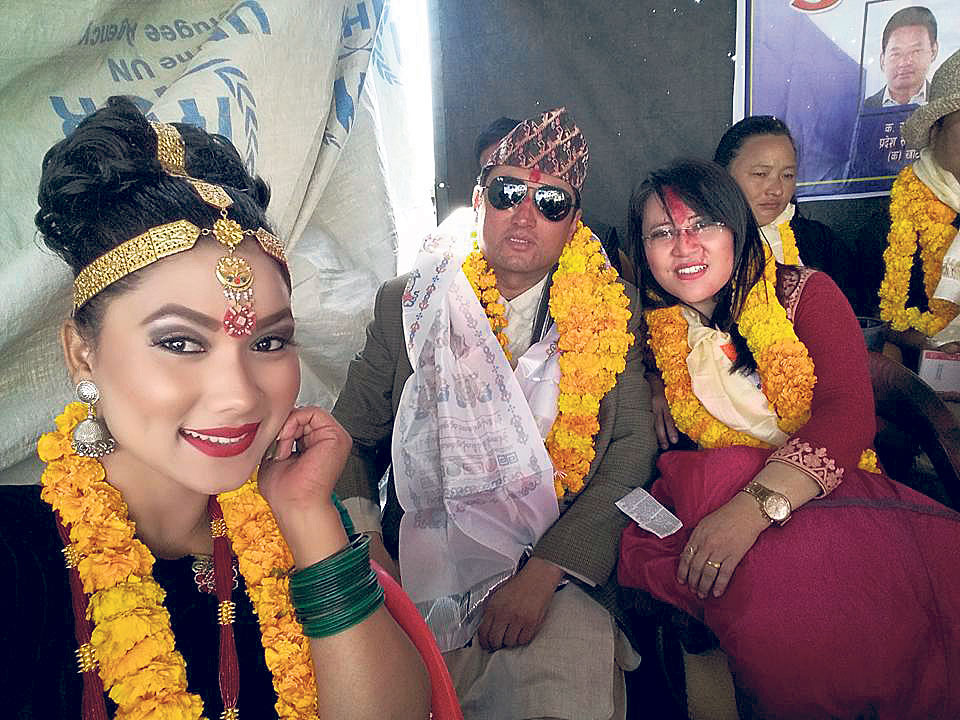 KATHMANDU, Nov 20: Along with the poll candidates and political parties’ cadres, artists and musicians are also playing major role in setting up the mood for the upcoming parliamentary and provincial elections.

What follows next is lyrical music of traditional folk duet songs known locally as ‘lok dohori’. And before anyone settles, participants and artists would be merrily dancing to the folk tunes.

As the election nears and candidates intensify their campaigns, this has become a common scene in many places. Nuwakot and Khotang districts are no exception.

In the capital’s neighboring district Nuwakot, such practice have been adopted by both the ‘democratic’ alliance led by the ruling Nepali Congress (NC) and its major opponent left alliance, comprising of CPN-UML and CPN (Maoist Center).

In general observation, the ‘democratic’ alliance looks ahead in embracing this practice than the left alliance. Members of NC’s cultural organization in the district have not left the side of the party’s candidates even for a day since the poll campaigns begun.

Many of the campaign songs are sung in ‘lok dohori’ style and most of them make political calls including the voters to vote for their party candidates. Although not in the scale done by NC, the left alliance is not far behind. Candidates representing CPN UML and the CPN (Maoist Center) are also making their voters join the dance.

Before converting political campaigns into corner meeting, campaigners use radio or loudspeakers to inform locals about the date, time and place of musical programs, and urge the locals to participate. The promotional strategy seems to work as many locals have been turning up at the venue.
One of the major reasons behind including music and dance is to entertain the voters and supporters in between political speeches. Secondly, music helps to keep the attention of voters intact.

Voters prefer music and entertainment than hearing the long speeches of candidates. But, these songs and musical events come for free. Candidates invest substantial amount of funds to produce catchy songs and music for their campaigns. Because of this, the elections have been a good source of income for musicians, said Uddyab Karki, former president of Nuwakot chapter of Dohori Pratisthan.

“Music has been a really effective means to promote election campaigns as it draws huge crowds of people to political events,” Karki said. “Catchy songs and trendy music making it easy for voters to remember the political campaign they attended. This can easily influence the election results in the favor of candidates if they are able to use the medium effectively.”

According to Yam Kumar Khati, Nuwakot chapter district member of UML, the left alliance has been using music and entertainment performed by national-level artists to pull voters in constituency-1.

“When we mix cultural programs in our election campaign, it becomes much easier for us to convey our political agendas to the mass. Election campaigns become more effective. However, campaigns in constituency-2 so far are mostly limited to speeches only,” he said.

NC senior leader and candidate for Nuwakot constituency-2, Arjun Narsingha KC said the use of almost extinct cultural programs also sends the message that our rich and diverse cultures should be preserved.

“Wherever we go, musicians and artists go with us. They are able to put forth our ideas to the voters, in a way that we could never do in our speeches. This has helped us in reaching to our voters,” said KC.

In the recent days, senior musician Mahesh Khadka has joined into the election campaigns in Khotang. He has been performing in election campaign of UML candidate Bishal Bhattarai, who is contesting in constituency-2 of the district.

While the left alliance has shown preference towards artists who have already made fame at the national level, NC seems to be prioritizing local artists and musicians. Kabita Sharma and Madan Thapa are just a few names.