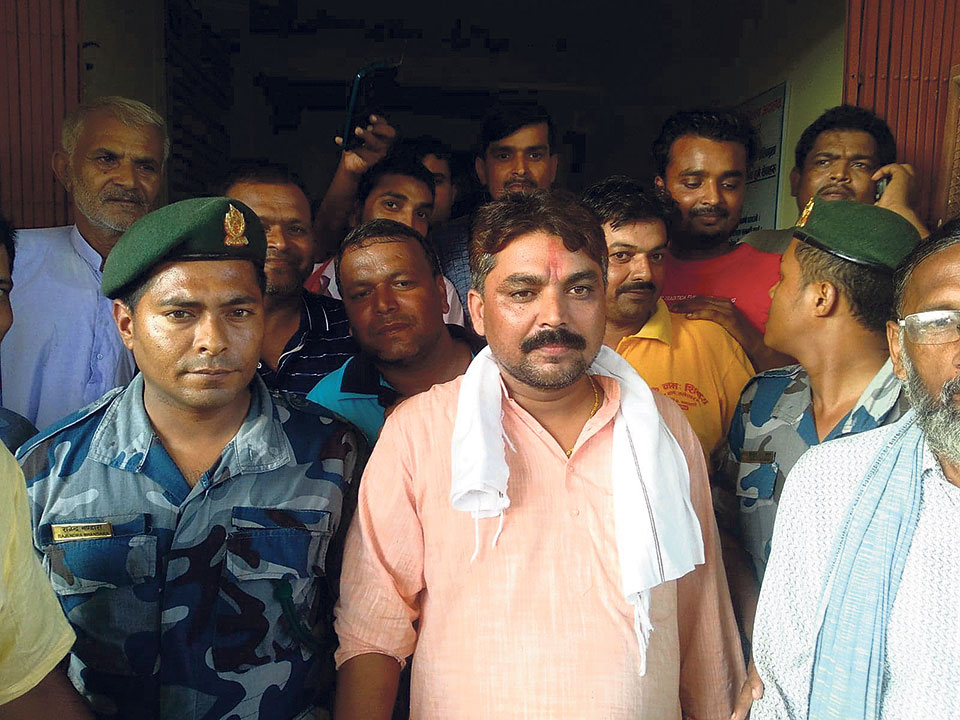 Province 2 state minister Abhiram Sharma (center), who has been accused in the murder of an Armed Police Force assistant sub-inspector in 2015, leaves the Mahottari District Court after being released without bail on Monday. He had surrendered at the court earlier in the day. | Photo: Mahesh Kumar Das/Republica

MAHOTTARI, Aug 14: State Minister of Province 2 Abhiram Sharma, who is one of the accused in the murder of Assistant Sub-Inspector (ASI) of Armed Police Force (APF) Thaman BK during the Madhes movement was released on Monday without bail following an order of Mahottari District Court.

A single bench of Judge Brajesh Pyakurel ordered the local administration to release Sharma against a reappearance date, informed Rama Nanda Pyakurel, registrar of the court. Sharma, who was accompanied by his bodyguards, had surrendered himself at the court at around 10:30 am, requesting to record his statement.

Following the recording of statement, the court decided to release him as it could find no evidence of his being directly involved in the murder incident, according to Court Registrar Pyakurel. Sharma recorded his statement for around two continuous hours.

While coming out of the court, Sharma expressed his gratitude, stating that the decision of the court was very welcome. According to him, he presented himself before the court as he respected the judiciary.

On August 3, the Janakpur High Court had issued an arrest warrant against Sharma and Jaleshwar Municipality Mayor Ramashankar Mishra. However, police were unable to arrest them.

Meanwhile, venting ire against the high court order, the Rastriya Janata Party-Nepal (RJP-N ) on August 8 threatened to withdraw its support from the Oli government .

However, the party has since climbed down from its controversial stance and stated that it would honor the high court's order. Sharma and Mishra were both elected in the local polls from the RJP-N.

On July 11, Sharma was appointed state minister for social development in Province 2. Following his alleged involvement in the murder of ASI BK, Sharma had been at large. He is one of the 28 accused in the BK murder .

Prem Bahadur BK, brother of ASI BK, had lodged a complaint at District Police Office (DPO), Mahottari against the murder.

The district court issued a 70-day warrant on March 10, 2016, demanding that the defendants present themselves before the court to record their statement .

Disappointed over failure by the DPO to make any headway, Shova Gahatraj, widow of the deceased, filed a writ petition at the district court on April 11, 2018, requesting a writ mandamus against the accused.

ASI BK was attacked and injured at district headquarters Jaleshwor on September 11, 2015 while returning to his office at Jalsagar after appearing for the UN Mission exam. He was rushed to Jaleshwor Hospital, where he received 16 stitches to the head.

Later, he was taken to Janakpur for further treatment. However, a group of unidentified individuals followed the ambulance and vandalized it. BK was then brutally attacked on the head with bamboo cane and cold drink bottles and killed

KATHMANDU, Jan 27: Deputy Prime Minister and Home Minister Rabi Lamichhane has stepped down from the post after the Supreme... Read More...

KATHMANDU, Jan 27: The election to the post of vice chairman of the National Assembly is scheduled for February 6. Read More...

KATHMANDU, Jan 27: Minister of State for Health, Dr Toshima Karki has said that the health sector budget will be... Read More...