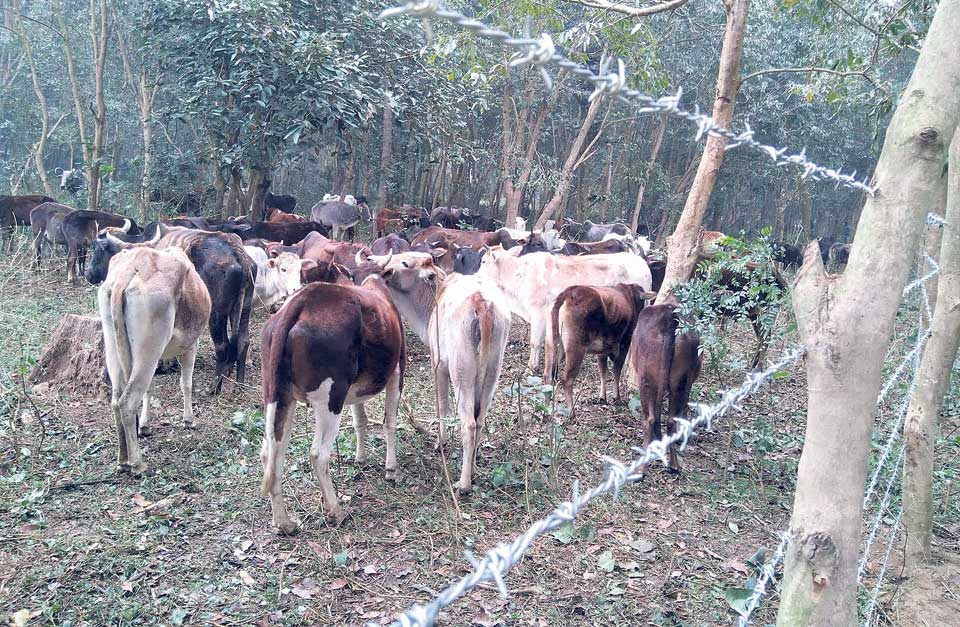 TIKAPUR, Jan 16: Until some time ago, cattle menace had been a headache for the locals of Tikapur. Farmers had to leave their fields barren as their crops often used to be eaten by the stray cattle.

In order to address this problem, Tikapur Municipality set an example by launching a campaign to manage stray cattle in coordination with the local farmers and social activists.

By fencing a three-bigha land of Tikapur Nursery, the locals have made a kind of sanctuary for stray cattle. After the initiation of this campaign, around 600 stray cattle have been locked inside this compound, informed Dambar Budha, chairperson of the committee formed for the management of cattle.  Though the sanctuary was built for managing a maximum of 300 cattle, the number of cattle has exceeded the actual capacity of the place.

"We had not expected such a high number of stray cattle," said Budha, adding, "I think the number will keep increasing in future."

After the establishment of the sanctuary, locals from other villages have also started chasing away the stray cattle toward Tikapur.

According to the mayor of Tikapur Municipality, Tapendra Rawal, management of stray cattle has been a common problem of all local units. With this, he also assured that efforts will be taken to stop the cattle from other villages to enter Tikapur.

"We should also take stern action against the locals who abandon their cattle on the roads," said Rawal.

During the elections, candidates of various political parties had included management of stray cattle in their election manifestoes. However, the people's representatives took some time to implement this for which they were widely criticized by the locals. Finally, they have delivered on their promise by making efforts to manage stray cattle.

Last Saturday, irked locals had chased around 300 stray cattle from the municipality urging the authorities to manage them.  Following the protest, the municipality took the decision to manage such cattle. The municipality provided nine quintals of barbed wires for fencing while the locals collected money for setting them up. As of now, the locals are managing food and fodder for those cattle. Mayor Rawal informed that four workers will be hired within a few days to take care of the cattle.

SURKHET, July 2: As part of the 'Prosperous Birendranagar: One home, one woman employment' program, depending on the type of... Read More...

BUTWAL, Sept 27:  The high number of stray cattle loitering on the roads of Butwal has not only disturbed vehicular movement... Read More...