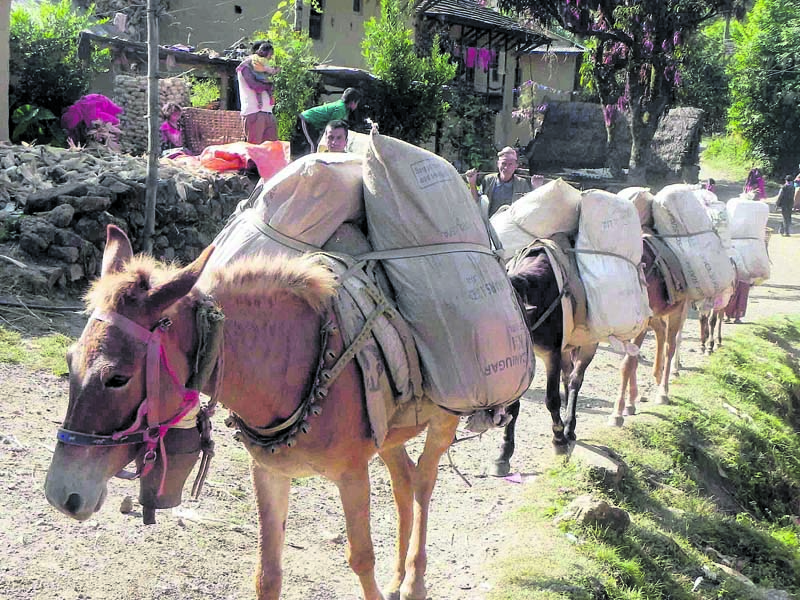 RUKUM, Oct 15: It takes hours of walk for Sunita Khadka to fetch drinking water. And as such having drinking water facility in her home is a farfetched dream. Similarly, she has faint hope of having transportation services in the village in her lifetime. A resident of Aathbiskot Municipality, she also laments lack of health facilities and power supply. “It may take years more for us to receive facilities like towns presently have,” she noted.
There are a number of villages in Rukum where basic facilities like heath, education, communication, irrigation are still only a dream. However, the government has upgraded their status to ‘sugam’ (which literally means areas which can be reached easily) in its recent review. However, Asthbiskot Municipality, among other places, which has no traces of modern facilities, was upgraded to sugam area. This has disappointed the local as they claim that the any area can be sugam only if it has facilities of a municipality.
“Our life is miserable as it was before. A few new road tracks have opened recently but they are not fully operational,” said Khadka. “We still use mules for transportation,” she added.

Khadka’s village has nothing as such of which its residents can boast of. It does not have school, college, hospital, or a market. The rough road tracks which have now connected them to the headquarters are not functional in the rainy season. These tracks are so poorly constructed that most time of the year vehicles are not able to ply on them.
Khadka stated that people have not stopped using mules to carry goods. Without the cattles, it is not possible to get goods to home, she said. “In most of the places, the roads are for name sake. And besides them there are villages which are not connected to the road at all,” she said adding that “nothing is going to change until and unless proper roads are constructed.”

Another resident of Aathbiskot Municipality, Laxman Budha, accused the government of being unjust to them in removing them from the category of backward zone. He says that the tag of urban provided to the locality is simply injustice to them.

“There are no facilities in our area that make us feel that we are living in a municipality. Our lifestyle has not changed. We are still walking hours to reach to the headquarters. Our kids are going to school by walking for hours. There are no hospitals, markets, anything,” he lamented. “But on what basis did the government upgraded our area to developed zone, I simply don’t understand,” he fumed.

“The government recently named some other areas as Durgam considering their backwardness. But this municipality has been excluded from the list,” he said. “This deprives us of the facilities the poor people like us are entitled to,” he added.

Not only Budha, but almost all the locals know that the exclusion means less development budget to their villages and wards. They are scared that the government might now deprive them of subsidies in rice and other grains. Similarly, aid provided in health, education and other core areas might also stop, they fear.

“It was haphazard announcement by the government when it claimed that almost all the VDCs have turned into municipalities. How can you upgrade VDCs to municipalities overnight?” Budha questioned. “And now people are suffering the decision. Their place has seen no development at all, but in the paper, it is already a municipality,” he added.
Locals urged the government to first ensure necessary services are in place before upgrading status of a locality in papers so that the residents have all the basic facilities.

At least, health and education services should be accessible, they stress.
“During emergency we have no ambulance to take patient to hospital. There are no health facilities around,” Budha stated. “We are disappointed.”

He further accused the government of keeping some better-off villages in the backward area category. For instance, Uttarganga Rural Municipality is relatively an advanced place than Athbiskot Municipality, he argued but is in the rural category.

Dev Bahadur Khadka of Sisne village also stressed on the need to develop urban infrastructures in any area before categorizing as a municipality. He argued newly opened road tracks cannot be solely considered as the basis for classifying any area as a municipality. “In fact, the roads have been killing people. The new road tracks are so narrow and so risky that many people have died in the past few years in road accident,” he said. “There should be holistic development or else we don’t want to have our locality classified as municipality,” he added.

Khadka further stated that there is no point of classifying an area which still struggles to fight with food crisis as sugam. “We don’t have that much production that we can depend on locally produced food and we don’t always have transportation facility to bring food from elsewhere,” he stated.

119 out of 460 rural municipalities without electricity

KATHMANDU, May 16: While the country has been declared free from load shedding, 119 out of 460 rural municipalities are... Read More...

Health facilities across the country without essential drugs

KATHMANDU, Aug 26: Health facilities throughout the country have been lacking essential drugs for over a year as the government... Read More...

With 333 new cases of coronavirus, COVID-19 tally in Sudurpaschim Province soars to 2,933
11 hours ago