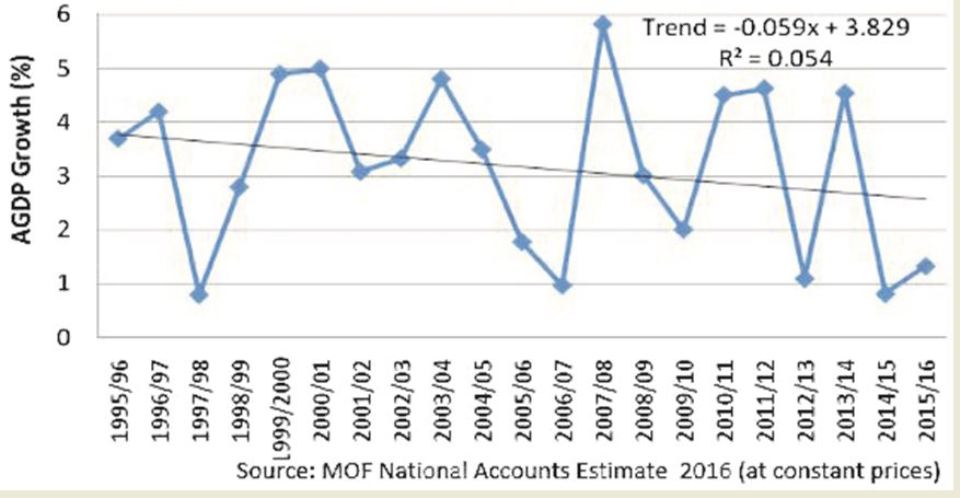 KATHMANDU, Jan 14: In his first term as prime minister, KP Oli put his signature on the Agriculture Development Strategy (ADS) document on July 20, 2016. Oli again came to power in February 2018 and covered more than two consecutive fiscal years of ADS implementation. However, it has been found that the 20-year strategy covering 2015 to 2035 and subsequent ten-year action plan, has been largely disowned by the government as its major recommendations and provisions remain unimplemented.

Also, there is a lack of annual action plans and targets to complement the ADS, making it impossible to track the trends and the intermediate progress.  With its 10-year plan and 20-year vision, ADS has seven major vision components and 16 indicators and targets.

Without specifying the responsible agency for its implementation, it proposes a total of 232 activities for agriculture transformation and economic growth through a self-reliant, sustainable and inclusive agriculture sector leading to food sovereignty. Four strategic components of the ADS include: governance, productivity, profitable commercialization, and competitiveness.

“It’s unfortunate that many of the proposed activities are not rolled out though the document was endorsed by the prime minister himself,” said Dr Krishna Poudel, an agriculture expert.

In its bid to make Nepal self-sufficient in food grains, ADS seeks to reduce the trade deficit in food grains to zero by 2020 from 16 percent in 2015, which is also a base year of the strategy. It aims to attain 5 percent trade surplus by 2035. It seeks to increase the year-round irrigation coverage to 80 percent from the 25 percent of the cultivated land in 2015, and the progress in the first four years is far below the annual target.  In 2018, around 28 percent of the agricultural land was irrigated while the ADS target for 2020 is 35 percent.

Official figures suggest that the agricultural imports have skyrocketed in recent years.  Last year, Nepal imported agricultural products including food grains worth Rs 200 billion. In the first six months of the current fiscal year, Rs 77 billion has been spent on importing agricultural goods.

As a basket fund for agricultural development, ADS proposes establishing a multi-donor ADS Trust Fund (ATF) with a flexible implementation modality agreeable to both the government and development partners. However, no trust fund exists to date. Officials at the Ministry of Agriculture and Livestock Development (MoALD) say that the proposal to establish an ATF was rejected by the Ministry of Finance in 2016, citing failures of similar funds in the past, including Nepal Peace Trust Fund.

In the absence of ATF, flagship programs proposed by the ADS are not operational, according to experts. “It is an irony that the prime minister himself signed ADS document, but its provisions are rejected by the ministry,” said Dr Poudel.

The first 10-year ADS action plan seeks to spend Rs 50 billion each year, totaling over Rs 500 billion in 10 years, which includes both donor and government funding.

Chaired by the Agriculture and Livestock Development Minister, the strategy wants the NADSIC meet every two months. Only two such meetings were held in the last four years. Also, coordinated by the National Planning Commission vice chair, NADSCC meeting also met a similar fate, with only a meeting in the first four years.

“The delay and confusion surrounding the implementation of the proposed activities is bound to make Nepal further dependent on agriculture imports,” added Dr Poudel.

A total of Rs 190 million was spent only to prepare and finalize the strategy document, which succeeds the earlier 20-year Agriculture Perspective Plan (APP) that covered 1995 to 2014.  The second edition of the agriculture strategy was prepared with financial assistance of 13 different donors, including the ADB, IFAD and the World Bank. The government officially endorsed the long-term strategy in July 2015.

Under ADS, officials claim that a few important initiatives have taken place. The setting up of a farmers’ commission, promulgation of act related to food security (2075 BS), expansion of rural connectivity through roads and electrification, improvement in land ownership by women, increment in agricultural grants and introduction of agriculture insurance were done to complement the ADS implementation.

Two joint agricultural sector consultation review meetings between the government and donors have taken place to assess the trends and progress of ADS and examine the challenges in the context of Nepal embracing federalism. A coordination unit for ADS is in place with four dedicated staff within the ministry.

“We organized a workshop in April last year which has recommended establishing a national progress monitoring system, specifying the role of donors and governments and agriculture planning under the federal system,” Gobinda Gewali, ADS JSR, coordinator said.

Experts cite the need for a clearly spelled out roles of every agency to spearhead the ADS implementation. A proposed ordinance, that seeks to specify the interrelation between the federal, provincial and local governments, is expected to further clarify the respective roles. The ordinance is under review in the National Assembly.

“Unlike the APP, the ADS enjoys political stability for its implementation, still there is no substantial change in the governance style and this is contributing to a massive delay in the implementation of development projects,” argued Dr Poudel, an agriculture expert.

“Coordination is always a challenge for such a multi-stakeholder initiatives,” added Dr KC, “We are planning to review and revise the ADS plan next year after consultations with the stakeholders”.

The fundamental flaw in the ADS is that the strategy was largely influenced by donor perspectives and it did not reflect the reality of Nepal’s agriculture sector, Dr Govinda Thapa, a senior economist said. He said that those involved in agriculture are considered subalterns, weak and uneducated.

“The prevalent psychology of Nepali society and government toward agriculture is faulty and the donors also joined the bandwagon in case of ADS,” Dr Thapa added. “ A new discourse is needed to understand the sector.”

Agriculture is considered a driving force for economic growth and poverty reduction. Almost 68 percent of the people are engaged in this sector. But over the last decade, agriculture’s contribution to GDP has seen a constant decline — from 31.6 percent in 2007 to 26.24 percent in 2017.

KATHMANDU, Nov 22: Prime Minister KP Oli has expressed unhappiness over the failure of ministries to spend budget in the first... Read More...