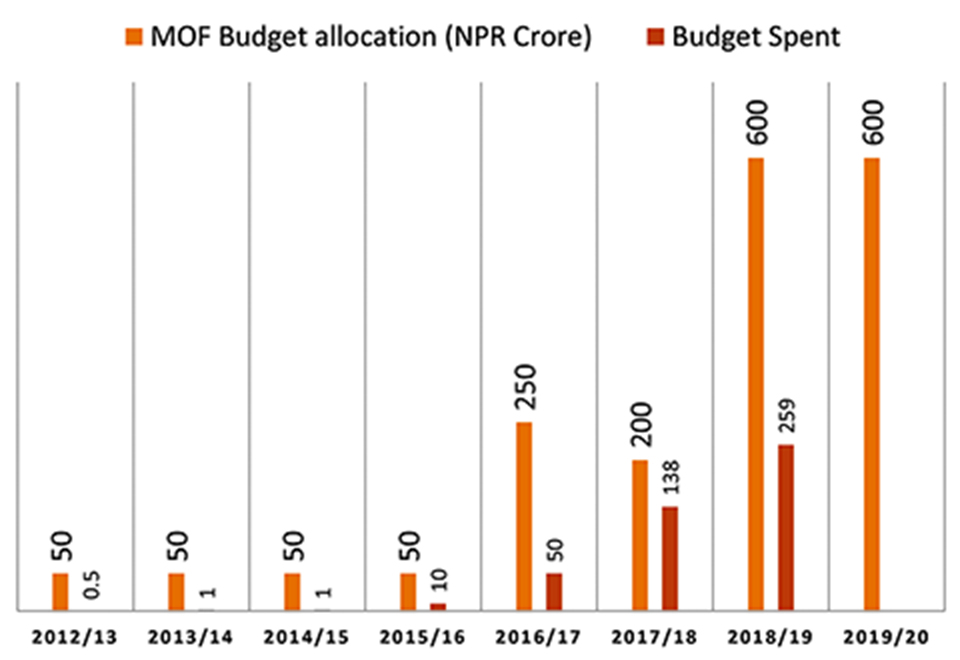 As Deputy Prime Minister and Health Minister Upendra Yadav is representing Nepal at a two-day UN General Assembly’s high-level meeting on Universal Health Coverage (UHC) in New York beginning Sunday, it has been learnt that billions of rupees meant for health insurance in Nepal goes unspent every year and the much-hyped health insurance initiative is already in crisis due to the lack of efficient delivery, outreach capacity, and alarming dropout rates.

The government has an ambitious plan of insuring at least 50 percent of the population by 2020 and 100 percent by 2030, in line with the UN sustainable development goals (SDGs) on universal health coverage. Going by the current progress, it is impossible to realize the target, experts say. Health insurance is one of the key components of the UHC and, Nepal’s important social health security program.

“We have so far covered only seven percent of the total population, which is 14 percent of the total population of 48 districts where the scheme is being implemented,” says Dr Ramesh Kumar Pokharel, executive director of Health Insurance Board (HIB), adding, “It would be difficult to achieve the next year’s target, but we hope to meet the 2030 target.”

The Health Insurance Act, 2017 requires every Nepali citizen to get his/her health insured and Section 3 of the act requires all parents and guardians to insure the health of their newborn, children, senior citizens and persons with disabilities.

Since the last four years, HIB has been unable to spend the allocated funds every year. Official figures suggest that only Rs 2.59 billion (43 percent) was spent, out of the Rs 6 billion provisioned in the last fiscal year (2018/2019). The allocation for the current fiscal year is also Rs 6 billion.

The health insurance scheme, which was launched in 2016, seeks to ensure quality health service and protect families from financial hardship and reduce out-of-pocket expenses.

“It is really bad, and there is a sheer lack of understanding on the part of the government and the stakeholders in terms of delivering the health insurance,” says  Dr Shiva Raj Adhikari, a professor of Economics at TU who specializes on health economics, adding, “It not a program, it’s a system that we must build.”

Experts are also concerned about an alarming dropout rates among the insurers. Of the 2.2 million enrolled members, around 500,000 (24 percent) have dropped out. “It’s a very high rate by any standards,” says Professor Adhikari, adding, “The population subscribing to the health insurance scheme is far lower than what the government claims.”

The dropout issue can be addressed through improvement in service delivery at hospitals. Service delivery should be of high quality, prompt and efficient, experts say. “Such an important initiative should not be driven by supplier’s perspectives, but by the patient’s perspective,” suggests public health expert Dr Sushil Baral, “The right of the insurers should be protected and they should get fast-track service.”

“The act should be implemented effectively and the board should be allowed to work autonomously,” says Dr Guna Raj Lohani, who headed the board for two years, adding, “It’s not a single year program, it’s a system that we are setting up. The board, with the given target, should have every right to spend all the allocated budget.”

Officials at the Ministry of Finance explain that the government’s budgetary allocation for health insurance is being treated as program cost, not as a grant.

“The Insurance Board has yet to function in its full capacity covering all 77 districts. That must be a reason why the unspent money is sent back to the central treasury,” says Than Prasad Pangeni, under-secretary at the Ministry of Finance.

“Fund, functions and functionaries are not compatible with each other in any health insurance scheme,” argues Dr Baral, adding, “The goal of reaching out to a large population was set without properly taking care of the implementation arrangements and our institutional capacity.”

Authorities concerned warn that poor performance could impact the target of achieving the SDG goals on lowering the mortality rate. Nepal has significantly progressed in maternal mortality, neonatal mortality and under-five mortality rates.

Khaga Raj Adhikari, a former health minister, who played a key role in launching the health insurance scheme, agrees that structural gaps are hindering the successful implementation of the health insurance. “There is a need to strengthen public health delivery system, through proper management of human resources, health equipment and medicines.”

The dillydallying in distributing the identity cards to all the poor is another reason for the slow progress in the insurance scheme. The government completed a poverty survey in 2070; but it has not been able to distribute the ID cards to nearly 400,000 poor households in 26 districts, where the first phase of survey was conducted. The insurance regulations clearly mention that the ID card for the poor would be the basis for identifying and reaching out to the ultra-poor for free insurance scheme.

The health insurance scheme is a comprehensive social contributory program with subsidies to the poor. While paying the insurance premium, a 100% subsidy is provided to the ultra-poor, senior citizens, MDR Tuberculosis, HIV/AIDs, leprosy patients while 75% and 50% is payable to the poor and marginalized as per the Health Insurance Guidelines-2074.

For others, a family of up to five members needs to pay a premium of Rs 3,500 annually to be qualified for ‘promotive, preventive and curative health services’ of up to Rs 100,000. A family comprising more than five members needs to pay Rs 700 per additional member. This would qualify them for an additional insurance coverage of Rs 20,000 per head.

HIB Executive Director Dr Pokharel, meanwhile, argued that the insurance scheme should not be seen in isolation. “It is interlinked with many other instruments and machineries. The capacity and quality of the service providers, motivation of health workers, fragmented health protection schemes and multiple health insurance schemes are some of the key issues before us,” he adds.

No study was done to figure out ways to bring onboard the province and local governments, Dr Baral says, “We must consider the fact that the state cannot take all the responsibilities, it should be a risk pooling and cost-sharing approach based on the economic status of the citizens.”

In a few districts, where health insurance has been fully implemented, the results are encouraging, says Dr Pokhrel, adding, “The number of private clinics has gone down as people are using government-sanctioned medical outlets.” These districts include Palpa, Chitwan, Ilam and Jumla, where more than 30 percent of the population is enrolled in the insurance scheme.

“Commitment from the government alone would be meaningless until and unless every political party and stakeholders worked hard to fulfill their commitment to realizing the universal insurance coverage,” argues Dr Pokharel.

Consultation on private sector and SDG

A one-day national consultation, “Roles and Responsibilities of Private Sector in Public Services for Achieving SDGs in Nepal” was held... Read More...