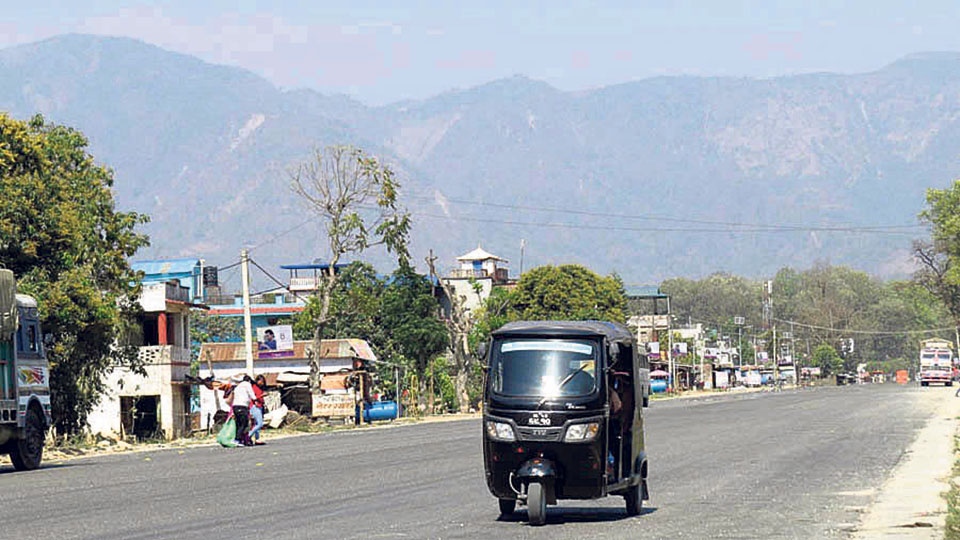 A three-wheeler on the freshly-blacktopped section of the Mugling-Narayanghat road on Tuesday. Photo: Republica

CHITWAN, May 23: Construction companies involved in the construction of Mugling-Narayanghat road have requested a fifth extension of work deadline.

The road section was divided into three sections and the sections were awarded to different contractors. The work deadlines of two companies have already expired.

Divisional engineer of the Mugling-Narayanghat Road Construction Project Govinda Prasad Khanal said that two companies have requested for extension of their work deadlines. “The rule says that a contractor has to make such request a week prior to the expiry of the deadline,” he said, adding, “Both have made requests in accordance with the rule.”

According to Divisional Engineer Khanal, 88 percent of the works have been completed. Only a part of Aptari-Dasdhunga section remains to be blacktopped. The remaining work includes construction of some roadside railings, sewerage and blacktopping.

The construction work was started with a budget of Rs. 3.2 billion.

GORKHA, May 28: Many multi-million rupee projects in Gorkha district have remained incomplete even months after crossing the deadline. In fact,... Read More...

PARSA, June 20: Construction of the 27 kilometers Pathalaiya integrated check post is likely to get delayed due to various factors... Read More...