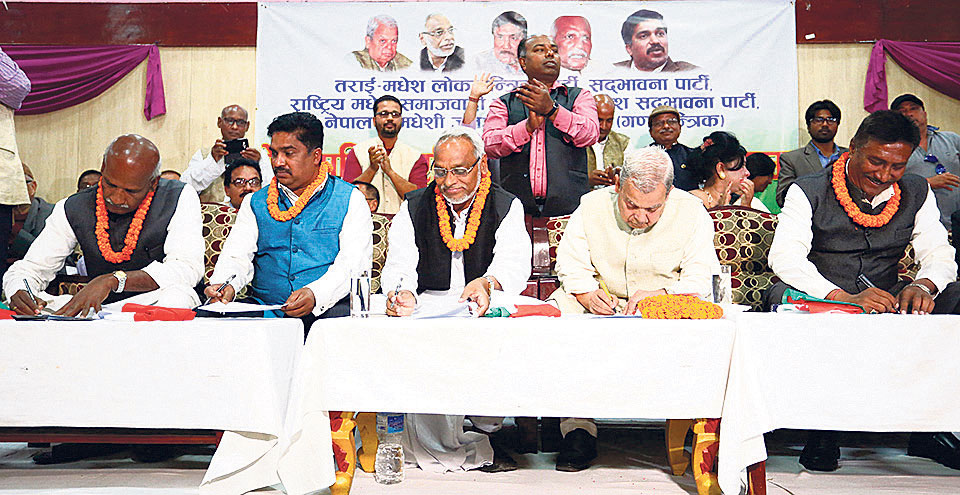 ‘Much ado about nothing’ is the title of a play by William Shakespeare which he wrote toward the end of the 16th century to highlight disagreements and bad behavior of newlywed couples in most cases on trivial matters. More formally and generally, the phrase means ‘a great deal of fuss over a thing of little importance’.

Spoken in the context of Madhesi politics, this certainly by no means is a trifle issue to fight over or argue vehemently. Rather, this refers to the way Madhesi politicians, from the distant past up until now, have presented their case or justification for having a Madhesi party or parties, different from national parties to look after Madhesi interests which, mainly, would mean advocacy for the wellbeing of Madhesi people which can’t be left to the discretion of national parties.

Not for Madhesh
With this sort of justification for the existence of Madhesi parties and their claim for legitimacy, their politics should then focus on welfare of millions of people in the Tarai Madhes region who have remained a severely discriminated ethnic group in the country, suffering exclusion and alienation from the national mainstream. This kind of treatment of Madhesis—much more by the ethnic Pahade parties than Pahade people themselves—has rendered them almost stateless, in a land they have inhabited for generations, from much earlier than the origin of Nepali state in the late 1760s.

Unfortunately, Madhesi parties have adopted all types of insignia—Democratic, Republican, Socialist, Janata and many other—that convey nothing about Madhesh or Madhesis to identify the core issues facing the Madhesis—of discrimination, exclusion and statelessness. What, for example, do the labels like Republican and Democratic tell us about Madhesh or Madhesis? Such labels can apply and apply more appropriately to national parties—Congress, RPP, Maoist, UML etc—for the reason that they represent the national forums in contrast to the regional forums Madhesi parties are grouped into.

A few of Madhesi parties, most notably Madhesi Janadhikar Forum (MJF) in some manner identified itself as standing for Madhesis’ needs and aspirations, especially about Madhesi rights and their exclusion from the national mainstream. But even such reference to rights of Madhesi didn’t focus on their core issues, which is the non-implementation of rights—right to equality—Nepali citizens have been granted under the constitution at par with other ethnic groups like Pahades.

If equal rights for Madhesis had existed, why then they aren’t recruited in Armed Forces such as police and army, intelligence or diplomatic wings of government, civil service and judiciary except in mediocre positions? The reason for such rampant exclusion and discrimination of Madhesis is that while the constitution doesn’t prohibit their equal access to opportunities, in effect, they are barred from accessing those opportunities, notwithstanding their education and expertise matching or even excelling the other recruits.

Opposing demands
There are just two instances over the past 30 years of Madhesi politics when specific demands were made to end discrimination and equalize opportunities. One was in 2012 when then MJF leader Sarat Singh Bhandari, as Defense Minister, proposed a Madhesi Brigade in Nepal Army but this incited a vehement opposition from national party leaders, calling this an anti-national proposal. RPP leader Kamal Thapa said that Minister Bhandari should be charged for treason for making such a suggestion.

Bhandari was dismissed from the position within days of making that statement and, surprisingly, not even a single Madhesi leader supported Bhandari, not even the architect of MJF, Upendra Yadav. This issue was never brought up again, in national or regional politics.

The second such instance of making Madhesi discrimination and exclusion a national campaign issue was the case of CK Raut who proposed division of the country—between Madhesh and hills—on ethnic line. Raut said that a division was the only way Madhesi discrimination and exclusion can end. Raut’s movement ran for some eight years, from 2010 onwards, that got widespread support from Madhesi youths but, again, his fight for a Madhesi homeland was vehemently opposed by hill as well as Madhesi leaders. After nearly a decade of effort, Raut suspended his campaign in 2019 and chose to enter normal politics to give a voice to Madhesis.

While Madhesi politicians had been campaigning for Madhes—for whatever purposes not still clear—the territory of Madhes had been changing in terms of demographics, with the rise of elite class of hill-people. With the facility of transport across the country starting from the 1960s, this has attracted steady migration of people from the country’s mid-and-high hill regions to migrate down to southern plains, in areas that had been populated by a different ethnic group—Madhesis—having roots in India to the south of Nepal border.

After more than 30 years of hill migration, population of Madhes region has become very much mixed, especially that in the eastern and western parts of Madhes. Except for a slice of mid-Madhes region, old Madhes has basically disappeared.

Losing relevance
In a situation of changing face of Madhes, current Madhesi politics and its leaders have to adjust to the new reality that they can’t win elections just by appealing to Madhesis. They have to be relevant also to new residents of Madhes, having roots in the mountain regions of the country that have absolutely nothing to share with Madhesis. They vote for hill parties and hill candidates and also have sway over native Madhesis for them to align with hill politics. In fact, Madhesi parties’ share of Madhesi votes has declined since the first election in 1991 after democracy was reinstated, except in the 2008 election when Madhesi parties recovered some of the lost grounds. The scale of voter rejection has since continued, with Madhesi parties receiving less than half of Madhesi votes in recent elections.

Madhesi parties’ rejection by Madhesi voters became more evident in the 2017 provincial and local elections in which Madhesi parties got majority in just one of seven provinces—Province 2. Even in this case, Madhesi parties had just a razor thin majority, bare enough to form a government. Some improvements in vote-getting occurred with the bonding of six Madhesi parties in 2017 but that remains fragile and shaky since no common leader has yet emerged. One Madhesi party—Upendra Yadav-led Socialist Party—has stayed out of this unity except for an electoral alliance with the united party—Rastriya Janata Party Nepal (RJPN)—but that also seems short-lived if RJPN joins the KP Oli’s government after the exit of Yadav’s party.

Course correction
With likely disintegration of Madhesi parties along with rising population of hill people in Madhes, there is no hope that Madhesi parties will win the next election under the banner of Madhes. They may not be able to maintain their current electoral seats, with the prospect that they may suffer a total defeat in a way that there is no electoral representation of Madhesis. Even in a situation of open democracy and fair election, Madhesi parties winning a dozen or less of parliamentary seats in a total of 160 elected seats, this will turn them into a pariah party, losing clouts with Madhesi voters and getting rejected by national parties.

If Madhesi parties foresee getting wiped out from the country’s electoral map, they then have to change course to avoid isolation and further marginalization of Madhesi people under the total control of state by one single ethnic group that has basically denied Madhesi presence in the country in all meaningful ways.

Madhesi parties then must shed off all their Madhesiness and become part of national politics by joining any of the national parties they consider may have clout to push for Madhesi agenda. Judging from the prospect of Madhesis again getting counted in national politics, their merging with Nepali Congress will carry a lot of weight and also would ideologically be a consistent choice, given the alternative of aligning with communist party that basically is alien to Madhesi population.

A further reason for aligning with Congress is that this party has lost almost all of its electorates because of the internal feuds and communists’ success of anti-Indian propaganda that was a major electoral draw in favor of communist parties in the 2017 election, most of it at the cost of Congress. As until now, Madhesis maintain a welcoming view of Nepali Congress and are alienated from communist parties for their anti-India phobia and their drive for a total control of Madhes without representation.

Madhesi leaders then must immediately get into a dialogue with Nepali Congress leaders who seemingly will be more eager for getting Madhesi support and Madhesi votes given that, save for some exceptions, the party can count on winning no more than a third of total votes in hill region which means that its winning a majority votes will depend on Madhesi voters. A merger choice is the best thing that can happen to two sides if this can materialize over the next few months and certainly much before the coming general election in 2022.

The author worked as a Senior Economist for IMF in Washington DC
Email: sshah1983@hotmail.com

KATHMANDU, Jan 24: At least 25 out of the 40 Nepali pilots employed by the state-run Nepal Airlines have tendered... Read More...

Discrimination in compensation for rape victims

DHANGADHI, Sept 21: The local unit, as well as the provincial and federal governments, decided to provide compensation to the family... Read More...