KATHMANDU, Dec 15: Sugarcane farmers on Tuesday staged a protest with their citizenship certificates and receipts for sold sugarcane after the Minister of Industry, Commerce and Supplies claimed that they are not the farmers but middlemen.

During a meeting held at the ministry on Monday, Minister for Industry, Commerce and Supplies Lekhraj Bhatta said that those who have been staging a sit-in protest at Maitighar Mandala in Kathmandu are not the real farmers. “I was told by the mill owners that those protesting in Kathmandu are middlemen,” he said.

After not being paid for seven years by the sugar mills, the sugarcane farmers began their protest from Sunday in a bid to exert pressure on the government to get their outstanding dues cleared.

Nearly 100 cane farmers from Sarlahi district in the southern belt of the country, who expected to be paid within a month after the Ministry of Industry, Commerce and Supplies committed to making necessary arrangements to get their outstanding dues cleared, staged a sit-in in the capital on Sunday in an apparent bid to exert pressure on the government.

It may be noted that the farmers had staged a sit-in in the capital in January, last year too. Then the government had assured the farmers to make sugarcane producers settle the dues within the first week of December every year. However, farmers have failed to receive the payment despite the government’s assurance.

Following their two-week long sit-in protest at Maitighar last year, the government committed to addressing their concerns. The farmers reached an agreement with the government on January 3. They were assured that their outstanding dues would be cleared by January 21.

Records at the Ministry of Industry, Commerce and Supplies show that farmers are yet to receive a due amount of Rs 481 million from four sugar producers, namely Shree Ram Sugar Mill, Annapurna Sugar Mill, Indira Sugar Mill and Lumbini Sugar Mill. Although the crushing season has already begun for this year, these sugar mills have not paid the farmers’ outstanding dues of the past six years.

The farmers, however, claimed that the sugar mills owe Rs 900 million to the famers who have not been paid for the past four years.

Here are some photos taken by Republica photojournalist Keshavb Thoker on Tuesday afternoon. 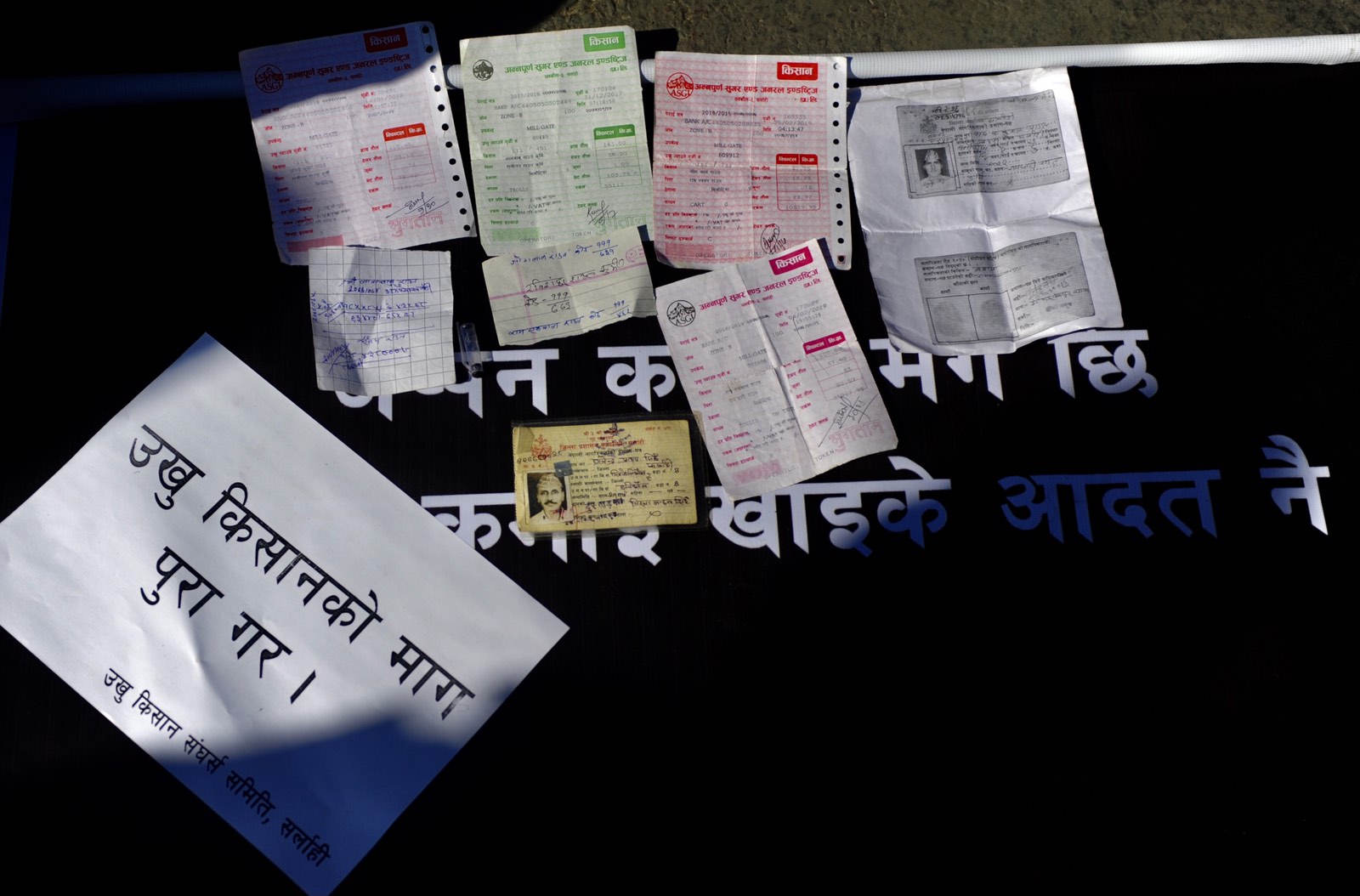 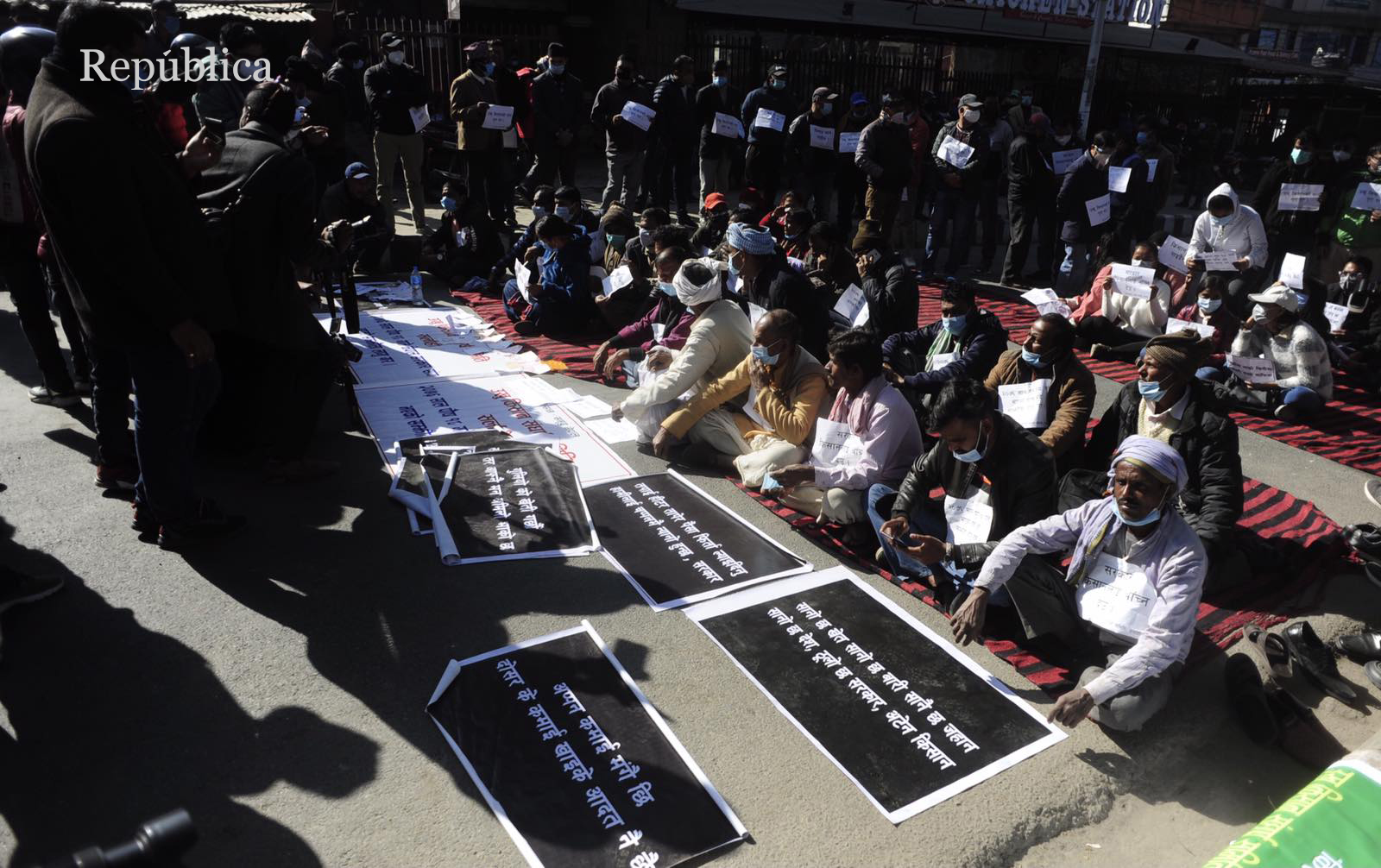 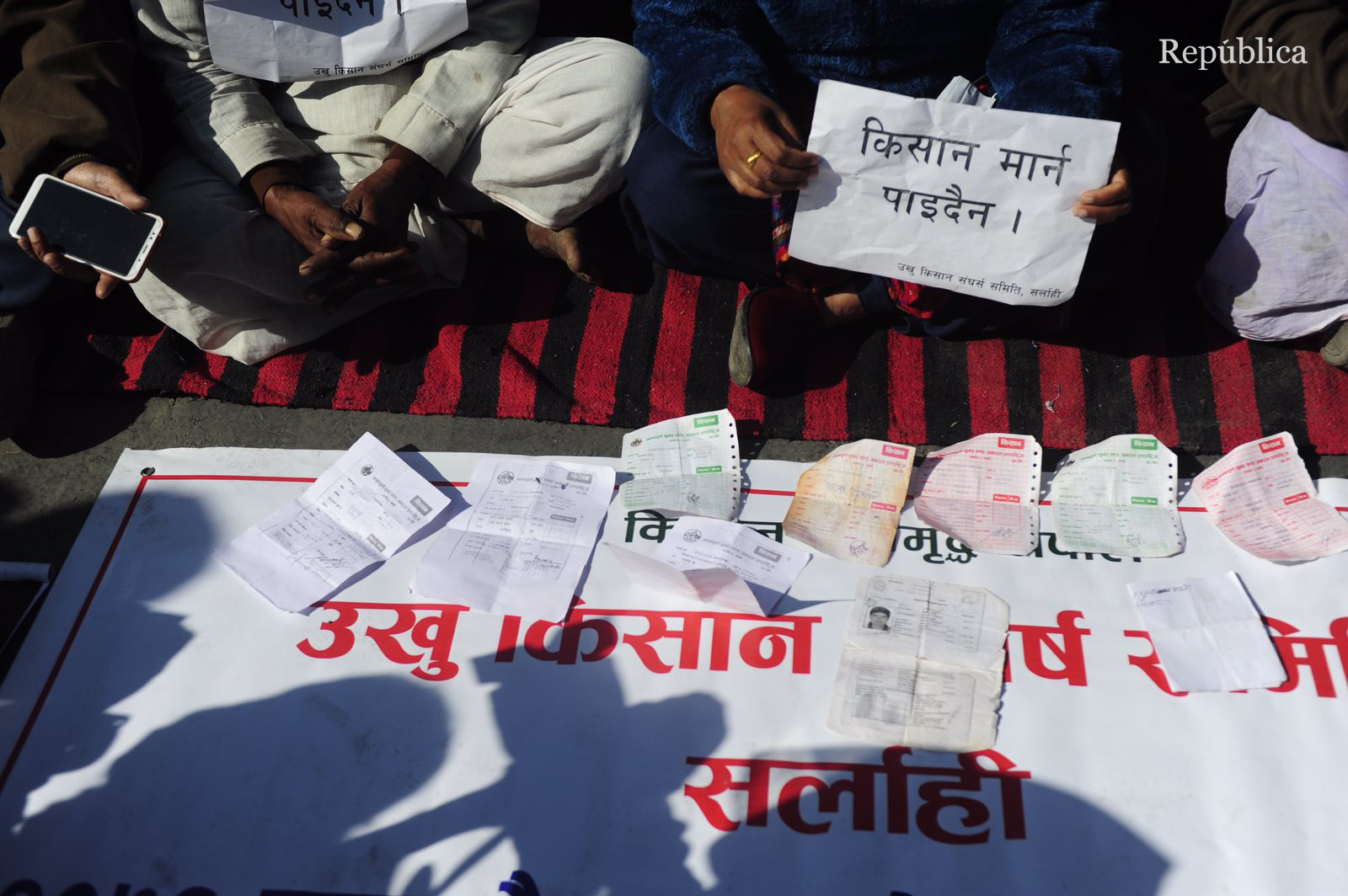 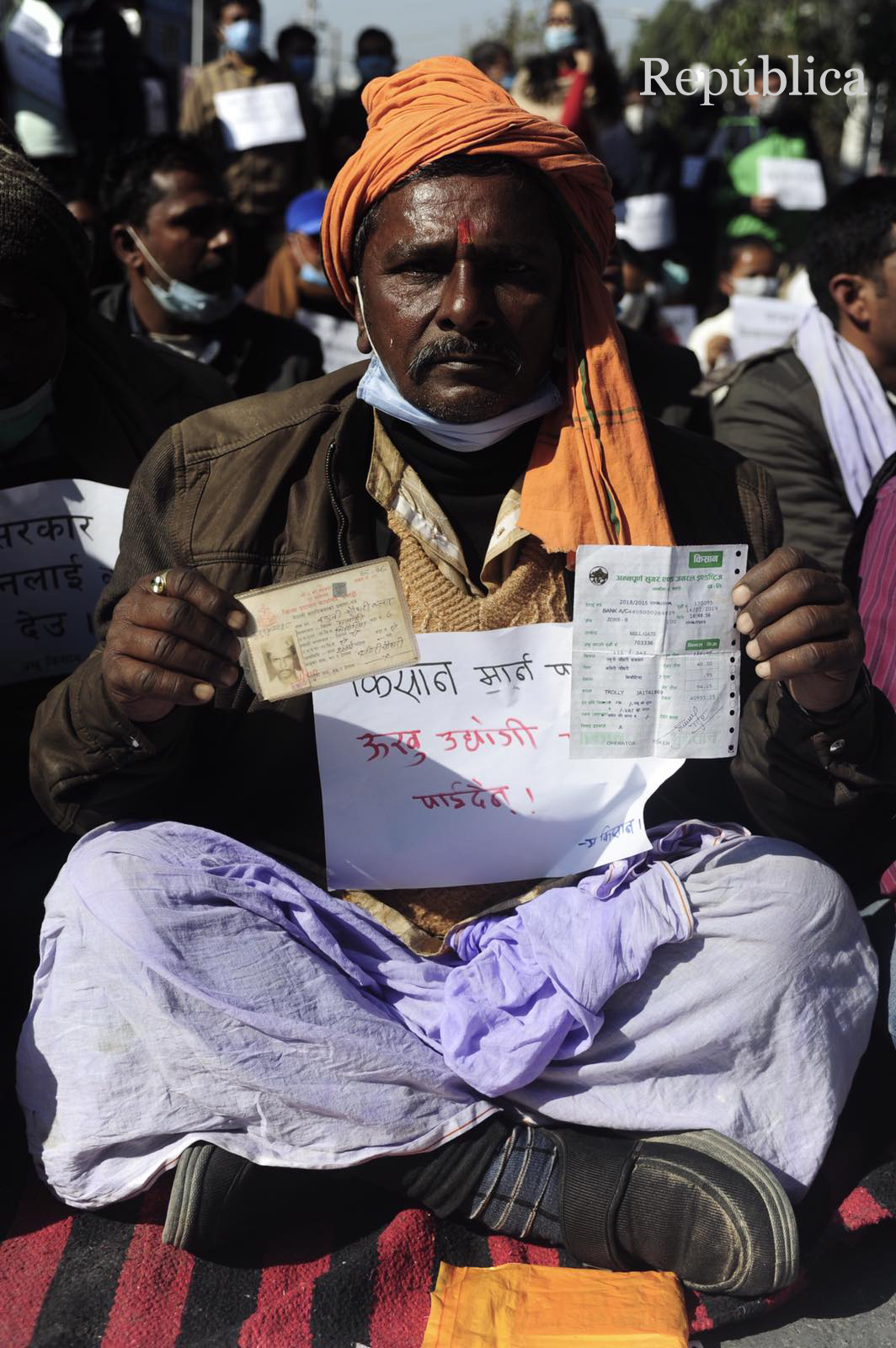 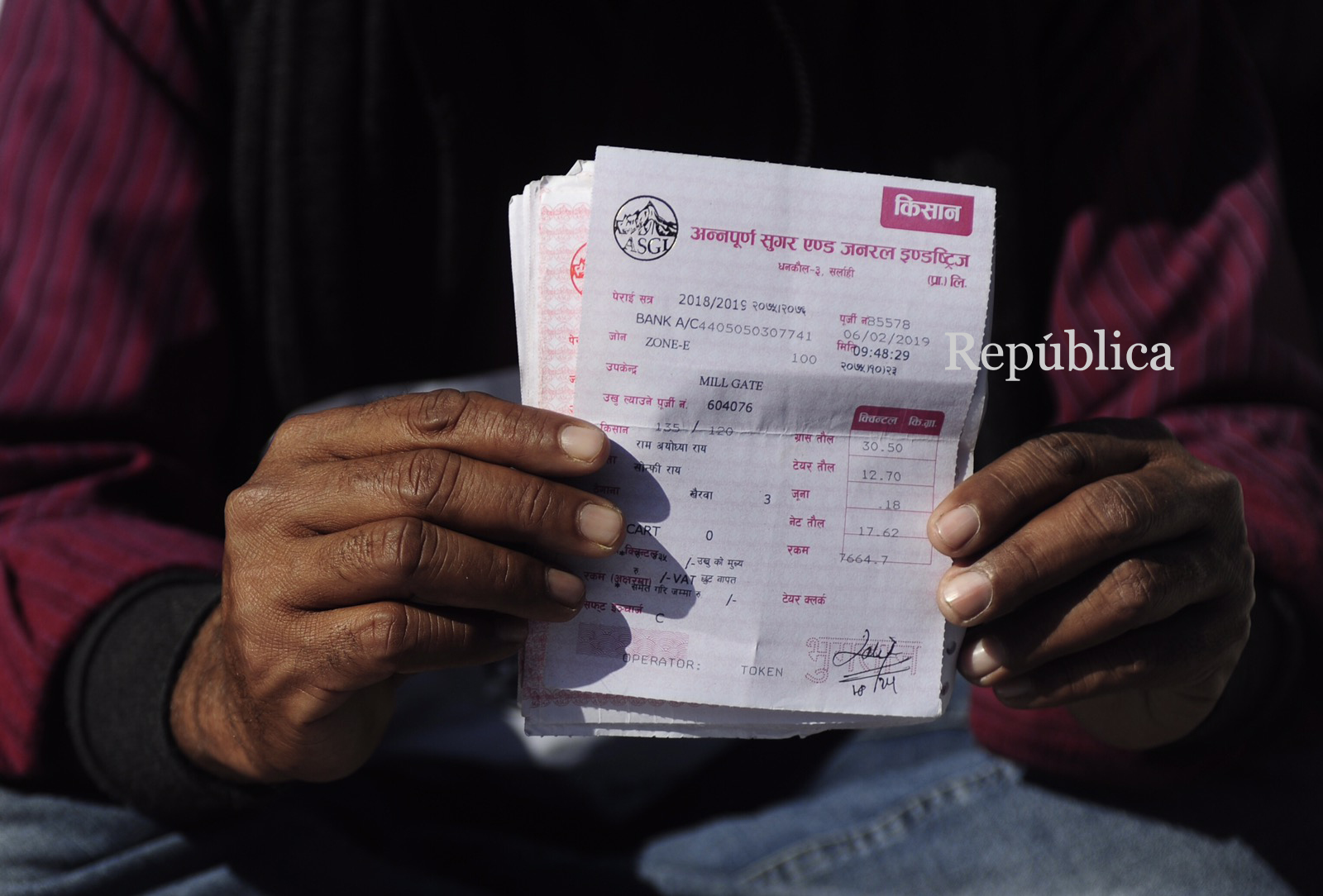 KATHMANDU, Dec 14: The agitating sugarcane farmers have demanded that the government guarantee that their outstanding dues for their produce... Read More...