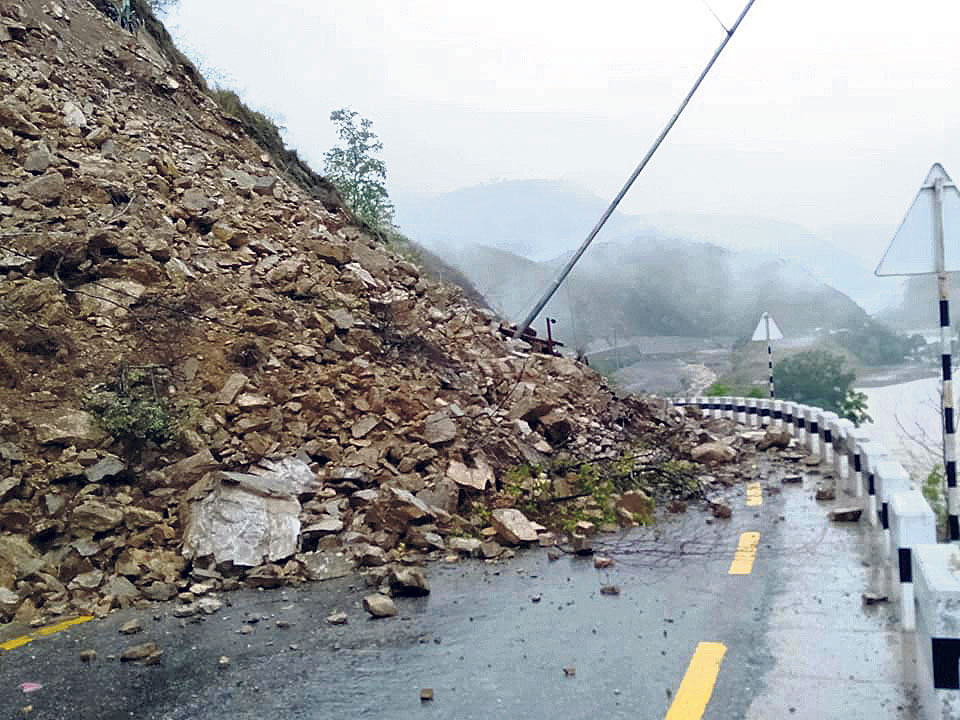 KATHMANDU, July 15: Landslides triggered by continuous downpour since last Thursday have disrupted vehicular movement along all the highways in the country.

The BP Highway which remained blocked by landslides in multiple sections since Friday reopened on Sunday.

According to Superintendent of Police Ramesh Thapa at the Secretariat of the Inspector General of Police (IGP) of Nepal Police, efforts are underway to remove the debris and reopen all the highways at the earliest.

Meanwhile, incessant rainfall since the past two days washed away a bridge over the Bhasi River that connects ward no 1 and 4 of Bardibas Municipality in Mahottari. This obstructed the vehicular movement along the East-West Highway. However, on Sunday, vehicles started plying the road as the water level of Bhasi River receded to a great extent.

Floods, inundation and landslides affected the movement of vehicles along various roads. According to police, not just the highways but even the feeder roads have been obstructed. The roads connecting Ramechhap, Kalikot, Rautahat, Mahottari, Mustang, Palpa, Udayapur and Okhaldhunga among others have been blocked in multiple sections.

According to the Department of Roads, it has intensified repair and maintenance work in the affected roads. The department informed Republica that Bagjhora and Simbhanjyang of Tribhuvan Rajpath, Khurkot-Ghrumi road section of the Mid-hill Highway, Hetauda-Kulekhani-Kathmandu road, Harkapur-Okhaldhunga road, Beni-Jomsom road, Besisahar-Chame road and Kanti Rajpath are still blocked by landslides.

Meanwhile, passengers travelling along the Karnali Highway have been compelled to risk their lives due to landslides at multiple places. A team deployed by the Road Division Office (RDO) is making continuous efforts to remove the debris.

“We have been coordinating with security agencies and stakeholders to ensure the safety of passengers and make sure that they are not stranded due to the road obstruction,” said Durga Banjade, chief district officer (CDO) of Jumla.

SINDHULI, July 20: The BP Koirala Highway has been disrupted due to heavy rainfall for the last two days. ... Read More...

KATHMANDU, Aug 12: Flights to Biratnagar and Bhadrapur in the eastern Nepal from Kathmandu were halted Saturday due to heavy... Read More...