More than a thousand Juventus fans injured in stampede in Turin 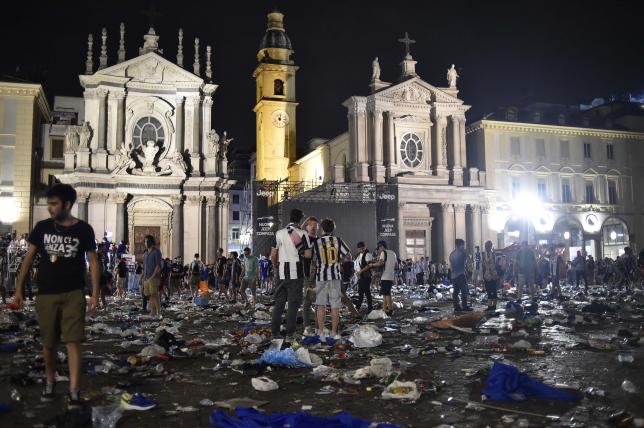 TURIN, June 4: More than a thousand Juventus soccer fans watching the Champions League final on screens in one of Turin's main squares late on Saturday were injured when loud bangs created panic and mayhem.

Around 1,400 people were treated for slight injuries, Italian media reported. About seven people were seriously hurt, including a seven-year-old boy who was trampled.

Thousands of fans had gathered to watch the Champions League final on a giant screen in San Carlo Square. The match, between Turin club Juventus and Real Madrid, was being played in Cardiff, Wales.

During the second half of the match, which Real Madrid went on to win 4-1, video cameras showed a sudden rush in the middle of the crowd in San Carlo square, and then a violent surge that flung people against barriers.

Many fans then began to run out of the centre of the square, screaming in fear.

The panic may have been started by the explosion of a loud firecracker that was mistaken for a bomb, a Reuters witness said. Police were still investigating what set off the stampede.

Afterwards shoes, beer bottles and bags littered the ground, people were seen limping and searching desperately for friends and relatives, the witness said.

Police set up an information point to help people find their loved ones, including many children who had been separated from their parents.

The mayor of Turin, Chiara Appendino, who had returned from watching the match in Cardiff, held a meeting with police on Sunday morning.

She was then due to visit the local hospital where the seven-year-old boy was being treated. His condition, after suffering injuries to his head and torso, is described as serious but stable.