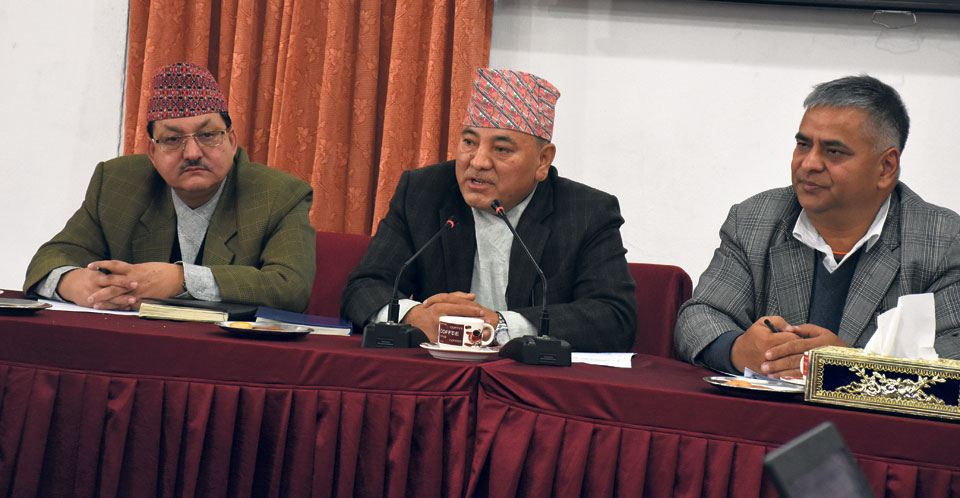 KATHMANDU, Dec 27: Secretary of the Ministry of Agriculture and Livestock Development, Yubak Dhoj GC, on Wednesday said that the country's agricultural sector is lagging behind other sectors of the economy due to lack of investment.

While stakeholders are calling for growth in agricultural production for replacement of farm imports, Secretary GC said such targets are difficult to achieve due to lack of investment. "Despite considering agriculture as the backbone of the country's economy, the government has allocated mere 2.27 percent of its total budget to this sector," he added.

He, however, added that there was no alternative to increasing productivity. "For that, we need latest innovations and technologies. We have not been able to bring new farm technologies due to lack of resources,” he said, adding: “We cannot expect high growth with this traditional farming method."

He added that the government should allocate at least 10 percent of its budget for the agricultural sector.

Secretary GC also attributed changing food habits of people to rise in farm imports. "People today prefer imported refined rice over the locally grown varieties. To meet this demand, traders have been importing refined rice from other countries," he added.

Speaking at a press meet held at the ministry on Wednesday, Secretary GC, however, said that agriculture sector is heading toward self-sufficiency. He also projected a record harvest of paddy in the current fiscal year.

According to the ministry, paddy production is expected to grow to 5.6 million tons in Fiscal Year 2018/19 -- a growth of nearly 9 percent compared to figures of the last fiscal year. In FY2017/18, the country harvested 5.15 million tons of paddy.

Though paddy production is projected to hit a new high in the current fiscal year, it will still be insufficient to meet domestic demand which stands at 6.1 million tons. This means there will be deficit of 500,000 tons.

"The ministry should be allocated more budget to increase farm productivity and become self-sufficient on agricultural products," GC told the press meet.

Meanwhile, GC said that the ministry was studying the prospect of cultivating new varieties of paddy which gives more yield.

KATHMANDU, March 28: The Ministry of Health and Population has kept six different hospitals in a ready position considering the... Read More...