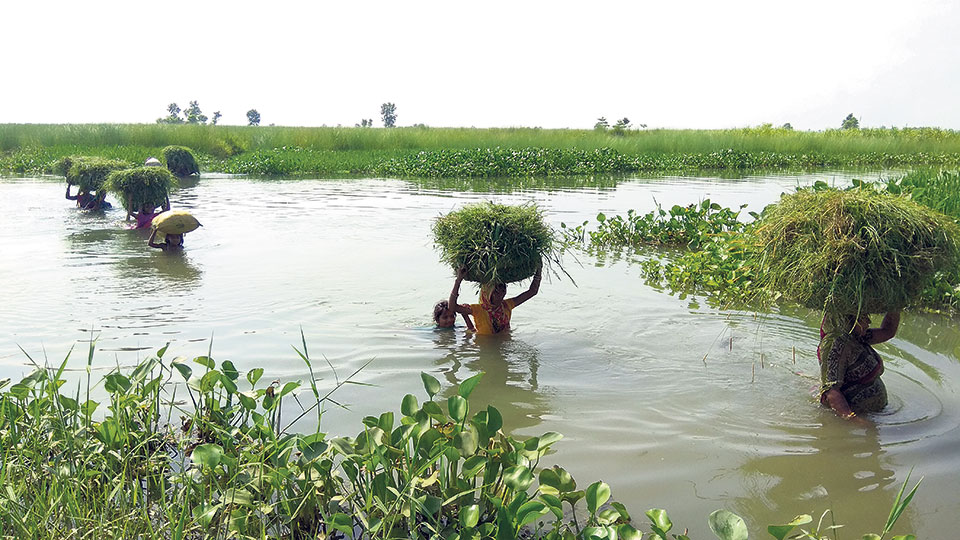 Children and women of Mahinathpur village of Sarlahi district fording the swollen Ekadashi River carrying fodder on their heads. Inhabitants of around half a dozen villages including Mahinathpur, Boharwa and Dhankaul risk their lives by crossing the tributaries of the Bagmati River in this fashion during the monsoon. Photo: Tanka Chhetri/Republica

KATHMANDU, July 8: The Flood Forecasting Division under the Department of Hydrology and Meteorology (DHM) has warned of potential floods in major rivers of the central and eastern regions of the country from Sunday night. Water levels are expected to rise in Kankai, Koshi, Kamala, Bagmati and Narayani rivers flowing through the Chure range and they could potentially reach the critical level.

This year, the onset of monsoon started in Nepal from the eastern side on June 8. However, it spread across the country only on June 28. According to meteorologist Subash Rimal of the Meteorological Forecasting Division (MFD), the monsoon rains would be more active from Sunday evening onward.

“Based on our three-day weather forecast, the central and eastern regions would have moderate to heavy rainfall from Sunday evening. It would spread to the west from Monday,” informed Rimal. The flood forcasting division is keeping a close watch on the country’s major rivers.

“Water levels are rising in the eastern rivers. We are on standby to timely disseminate flood alerts if they cross the critical level,” said Rajendra Sharma, chief of the Flood Forecasting Division. According to him, water level had crossed the critical level in Babai and Kamala rivers last week. “But we were able to relocate the residents to safer places by disseminating timely alert,” he added.

Hydrologist Binod Parajuli of the DHM said they have effective system in place to ensure that the information and alerts reach the communities at risk on time, to ensure swift evacuation of people and properties.

“As soon as we determine risk of floods, we inform the National Emergency Operation Center (NEOC) of the Ministry of Home Affairs. They then communicate the information with the local governments and communities,” he said.

Furthermore, anyone can dial the toll-free number 1155 to get information regarding the situation of rivers and floods. The toll-free information service is available 24/7, said Parajuli.

Likewise, the public can access the flood alert bulletin from websites of the DHM and its social media. The information is also disseminated, more significantly by the local media like radio.

Furthermore, the Flood Forecasting Division also uses Ncell and NTC telecommunication networks to send mass SMS to alert the people of the areas at high risk. However, last week, NTC had failed to deliver the mass SMS due to some technical glitch in its software. The MFD informed that the problem now has been sorted out.

Hydrologist Parajuli said they have the capacity to send the alert nine hours prior to major flood for the settlements nearby big rivers. The ability is slightly diminished when it comes to medium and small rivers like Kankai, Kamala and Bagmati. They can predict the floods only 5-6 hours ahead for such rivers.

“Prediction is very difficult for rivulets and gullies that are active only during monsoon,” he informed.
According to data maintained by the NEOC, floods have claimed 14 lives from April 14 to July 5 this year.

‘Things could become more difficult for immigrants in US, but not likely for Nepalis’

Dr Dee (Dianne) Aker who has been a part of the peace building process in Nepal for the past 15... Read More...