Modi urges India to reject violence in name of religion 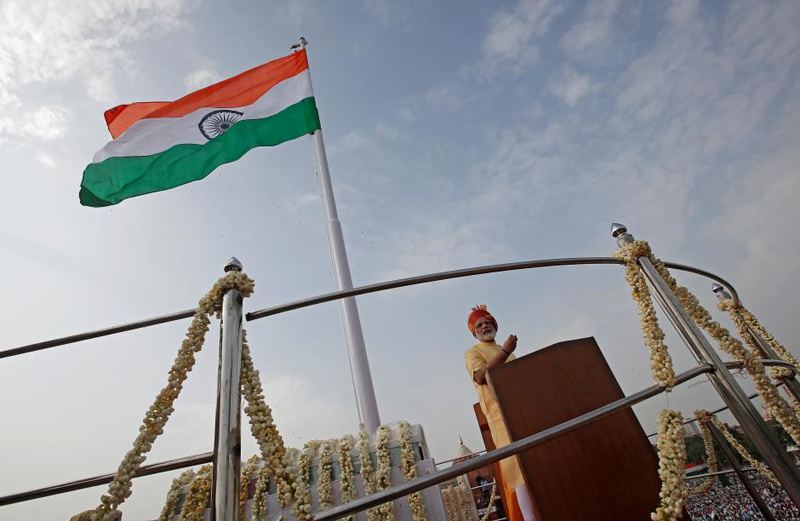 NEW DELHI, August 15: Prime Minister Narendra Modi urged India on Tuesday to reject religious violence, after a series of attacks against minorities sparked debate about whether a surge of Hindu nationalism is undermining the country's secular ideals.

In a speech from the ramparts of Delhi's Red Fort marking the 70th anniversary of India's independence, Modi also listed his government's achievements, including a fight against corruption.

The speech was light on foreign policy, making no mention of arch-rival Pakistan or of China. India has for nearly two months stationed hundreds of troops along its northern border with China because of a territorial dispute.

Modi has spoken out against attacks by right-wing Hindus, many of whom back his Hindu-nationalist Bharatiya Janata Party (BJP), against minority Muslims and lower-caste Hindus accused of killing cows, considered holy by the majority Hindus.

But the setting of his denunciation of violence on Tuesday was significant.

"We will not tolerate violence in the name of faith," Modi said before a teeming crowd at the fort and a huge television audience.

Modi made much of the progress India has made since independence from British rule in 1947.

But he also expressed pain over the death of at least 60 children in a state-run hospital last week amid shortages of supplies - a reminder much remains to be done on India's journey to development.

Since coming to power in 2014, Modi has found it difficult to balance the competing demands of groups from his nationalist Hindu power base and those Indians striving to build a modern, secular country befitting its growing economic influence.

Manoj Joshi, a fellow at the Observer Research Foundation think-tank said Modi was playing "good cop, bad cop" by condemning communal violence but doing little to rein in elements of his ruling party.

"There is an obvious gap between slogan and implementation. It's a deliberate gap and it's just for the record," he said.

Modi also spoke at length about delivering a "new India" by 2022, underlining his confidence of winning the next general election, due by 2019.

Still, to keep up with the demands of India's 1.3 billion people, the government needs to create millions more jobs a year, which it is struggling to do.

"A certain level of triumphalism ... brought Modi to power," analyst Ajai Shukla told NDTV. "Now he realises people are expecting answers. He felt the need to convey an aura of progress."

Modi was conciliatory towards the Muslim-majority Himalayan region of Kashmir, where violent protests against Indian rule have erupted over the past year, saying neither "name-calling nor bullets" would be enough to pacify the region.

What was needed, he said, were "hugs" for Kashmiris.

Kashmir has been divided between Pakistan and India, and a source of conflict between them, since their creation upon the partition of British-ruled India in 1947.