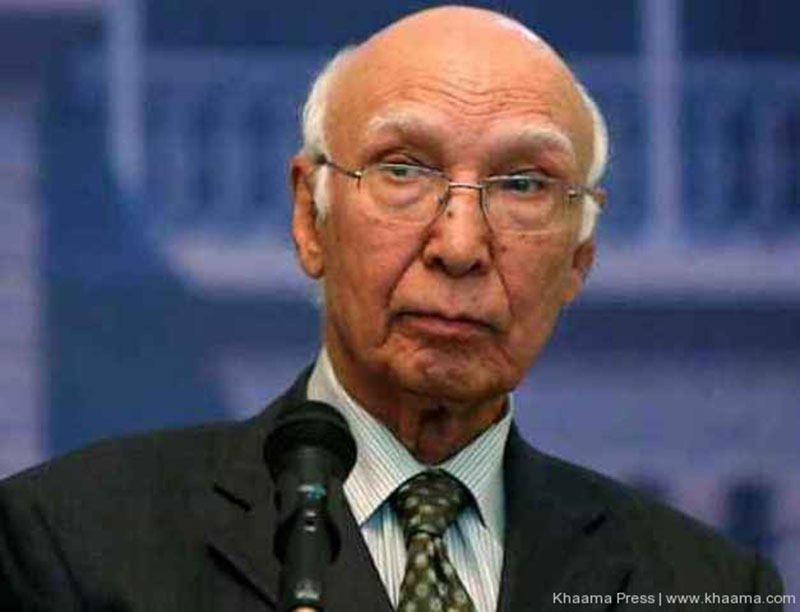 KASHMIR, Oct 17: Adviser to Prime Minister on Foreign Affairs Sartaj Aziz on Sunday said that India had no moral ground to talk about counter-terrorism efforts and pointing fingers at other states as Indian state sponsored terrorism and terror financing on Pakistani soil has been proven irrefutably.

The adviser reacted strongly to Indian Prime Minister Modi’s statement that Pakistan is the ‘mothership of terrorism’ and said that “Modi is misleading his BRICS and BIMSTEC colleagues and has no moral ground when his own government is involved in state terrorism in Kashmir.”

“The Indian leadership is desperately trying to hide its brutalities in the Indian occupied Jammu and Kashmir, an internationally recognised dispute on the UN Security Council agenda, where innocent people are being killed and injured by the occupation forces daily with impunity,” said Aziz

He said the people of India-held Kashmir (IHK) are being subjected to genocide by India for demanding their fundamental right to self-determination, as promised to the Kashmiris in the relevant UNSC resolutions.

“The ongoing Indian atrocities have taken over 150 Kashmiris lives, including children and women, and inflicted injuries on around 15,000 and blinded many hundreds,” said the foreign affairs adviser.

He also said that the UN Human Rights High Commissioner in Geneva and Organisation of Islamic Cooperation (OIC) Secretary General, OIC Contact Group on Kashmir and OIC Independent Human Rights Commission have called for sending a fact-finding mission to IHK.

“The UN and OIC have rejected Indian attempts to equate Kashmiris’ movement for self-determination with terrorism,” the adviser remarked, adding that the UN has repeatedly emphasised that people fighting for their self-determination cannot be categorised as terrorists by the occupying state.

The adviser said Pakistan joins all the members of BRICS and BIMSTEC in condemning terrorism and reaffirms its full commitment to fighting the menace of terrorism without discrimination, including against Indian state-sponsored terrorism on Pakistani soil.

“Pakistan’s sacrifices in the war against terrorism are well acknowledged and repeatedly appreciated by the leadership of most countries in the world.”

He added Pakistan is a victim of Indian interference and subversive activities,which are aimed at destabilising Pakistan.

“Unfortunately, in complete disrespect of international law and the UN Charter, the Indian government is pursuing its hegemonic designs,” Aziz stated.

The adviser also called upon the international community and especially the BRICS leaders to ask India to stop the bloodshed in Kashmir immediately, release Kashmiri leaders and thousands of Kashmiris taken away forcibly and address the humanitarian crisis, caused by India through the creation of shortage of basic amenities.

Earlier on Sunday, while addressing BRICS leaders in Goa,  Modi called for a strong united stand against the ‘mothership of terrorism in South Asia’, in a thinly veiled reference to Pakistan.

“In our region, terrorism poses a grave threat to peace, security and development,” Modi told leaders at the BRICS summit in the tourist state of Goa. However, in their joint statement issued later, the Brics leaders made no mention of Pakistan while condemning recent attacks against some of its members ‘including India’.

Prime Minister moving to new residence with bunkers
14 minutes ago