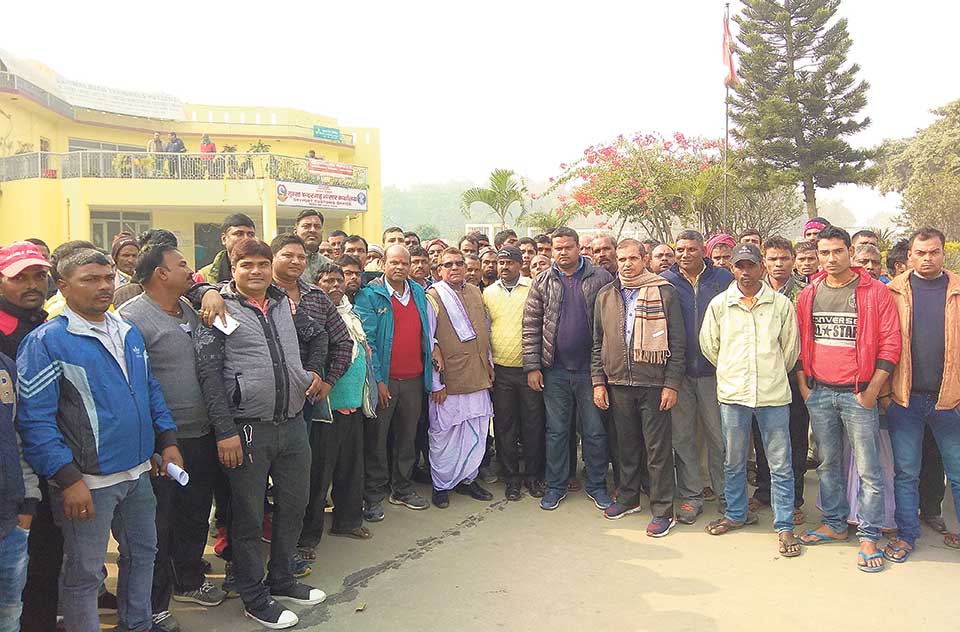 Locals protest at the Birgunj-based dry port asking not to allow clinker and other raw materials of cement supplied via the dry port, on Monday. Photo: Ritesh Tripathi

The statement of government officials came the day after Indian authorities barred cargoes at Raxaul port citing health hazard to the locals and pollution.

Locals of Raxaul had been protesting against transport of such goods via their city, citing pollution issues, for a week.

Indian railway authorities on Sunday announced to stop the transport from Raxaul in response to the locals’ protest. A team led by Joint-secretary at the Ministry of Commerce Rabi Shankar Sainju has reached Birgunj the same day to sort out the issue.

However, India has not officially informed Nepali authorities about their barring the supply of such cargo.

Transport trucks receive such cargoes from Raxaul and supply to the cement factories in Nepal. Raxaul locals have been irritated by the long line of trucks when they are receiving cargo at the Raxaul port.

Joint-secretary at the Ministry of Commerce Rabi Shankar Sainju said that they could not receive such cargoes at the ICP as it could affect overall import-export of the country. He also said that the ICP was not designated for such cargoes. The ICP is the main trade point of Nepal through which the country’s 40 percent trade happens.

Nepali cement industries are dependent on the clinker and fly ash coming from Indian states of Rajsthan, Asam, and Uttar Pradesh.

“We have taken steps to sort this problem in two ways. First, asking India for allowing such cargoes be diverted to other trade points like Jogbani and Bhairahawa immediately for short-term solution, and second, finding a permanent alternative place for receiving such cargoes from India,” Sainju said.

Officials of the Department of Railway have joined Sainju’s team at the Birgunj to look for alternatives of expanding railway line of Sirsiya to any other site in Nepal, away from human settlement, for building suitable facility to receive such cargoes.

The government officials also said that they will soon discuss the issue with Nepali cement manufacturers and contact with authorities in New Delhi to sort out the issue.

“We will propose for bilateral signing of ‘Letter of Exchange’ on allowing such Nepali goods diverted via other trade routes to address the problem immediately. Government officials are hopeful of sorting this out before the meeting of Nepal-India commerce secretary level inter-governmental committee early next year.

Indian authorities are also building another infrastructure at Ramgadawa near Raxaul to keep the port away from the city of Raxaul, but even Ramgadawa locals have now resisted the plan.

Locals of Sirsiya in Nepali side have also staged a protest against receiving such cargoes at Sirsiya, fearing pollution, according to government officials.

President of Cement Manufacturer’s Association Dhruba Thapa said that they will soon meet with Nepal’s Minister for Commerce Min Bahadur Biswakarma to make the government aware of the issue. Asked about Sainju’s idea of allowing importing such goods via other trade points, Thapa said importing from other trade points only increases cost of import, which implies that cement would be costlier.

Thapa also criticized the government for not providing sufficient support to produce clinkers within the country, which has made the country dependent on India. It is not supportive of the policy of discouraging cement factories from grinding imported clinkers, Thapa said.

KATHMANDU, Dec 18: Concerned over the overall standing of the party and their portfolio in the merged entity, second-rung leaders of... Read More...