BHAIRAHAWA, Oct 4: Kul Thapa, who was spotted at Belahiya border point on Friday afternoon, was in a rush. With a heavy bag on his back and two suitcases in each hand, he was trying to strike a balance while moving ahead.

“I will reach home by the evening," he said, sounding delightful. "It's Dashain! Rush is natural."

Thapa, a local of Lekhnath Municipality, has been working at a hotel in Delhi for over a decade. It is only during Dashain that he takes a break from his work.

"Whether they allow me to leave at other times or not, I do not care. But they know that I cannot compromise during Dashain," he said. "This is the time I come home and I celebrate," he added.

Belahiya border looks very crowded these days. And Nepalis like Thapa seem to be in a joyful mood. The Dashain fever is in the air. 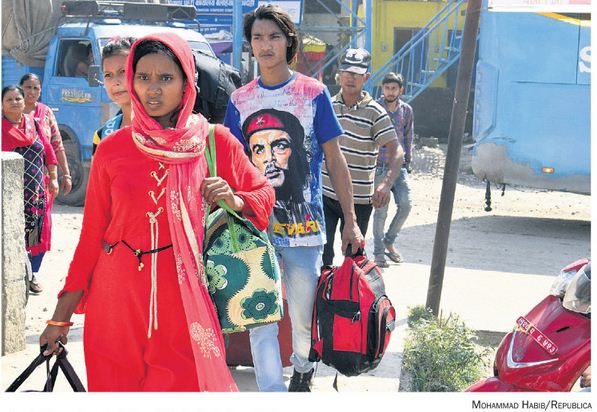 "Get-together with family and friends once a year actually gives energy to work for the entire year. It's such a great festival," stated Thapa.

In his bag and suitcases, he has gifts for his family members and relatives. He was busy purchasing gifts in Delhi for several days. "Everyone expects gift. Be it small or big, they value it," he said.

What excites Thapa is the Dashin thrill in the village. He loves playing swing a lot.

"In our times, there used to be swings everywhere. These days, swings have become rare," he noted. "But I make sure that I play swing in Dashain," he added.

Sonu Hamal of Shantipur, Gulmi district was equally happy to get back home in Dashain. However, he complained about poor transportation service.

"They should have made a better arrangement for Dashain. It's a huge hassle as there are not enough buses here," said Hamal, who was also returning home from Delhi.

According to him, the bus that left from Delhi was supposed to drop him at Butwal. But citing border hassles, he was left standard at Belhiya.

"The ticket mentions 'from Dehli to Butuwal' but they drop us before reaching the destination," he said. Hamal had boarded a bus of Buddha Travels.

Kuber Singh Rana was another Nepali spotted at Belahiya with heavy luggage. He has saved enough money for Dashain this time. "It is going to be great. I made great saving for the celebration," he said. "

According to DSP Kamal Belbase, police chief at Belahiya, the authority is trying its best to ensure the comfort of passengers. At the border, a special force has been deployed to facilitate the returnees.

"It is our duty to ensure their comfort. At the same time, we have to be careful about theft and other unwanted incidents," he said.

Security checkings at the border has been tightened. Nepal Police has coordinated with its Indian counterpart in view of the festival.

"We are working in close coordination. They also know what Dashain means to Nepalis," Belbase said.

Help desks set up by police look equally crowded. The police said that over 3000 Nepalis have been returning home through the border point.

While three to four buses leave for Belhiya from Delhi on a normal day, Dashain sees around 20 buses in this route.

KATHMANDU, Nov 1: Civil society members and rights groups in Malaysia have urged the government there to amend the Peaceful... Read More...

KMC registered over 1,000 complaints against 27 cooperatives last FY
21 hours ago
Current govt is an alliance of greedy sinners: Rayamajhi
22 minutes ago