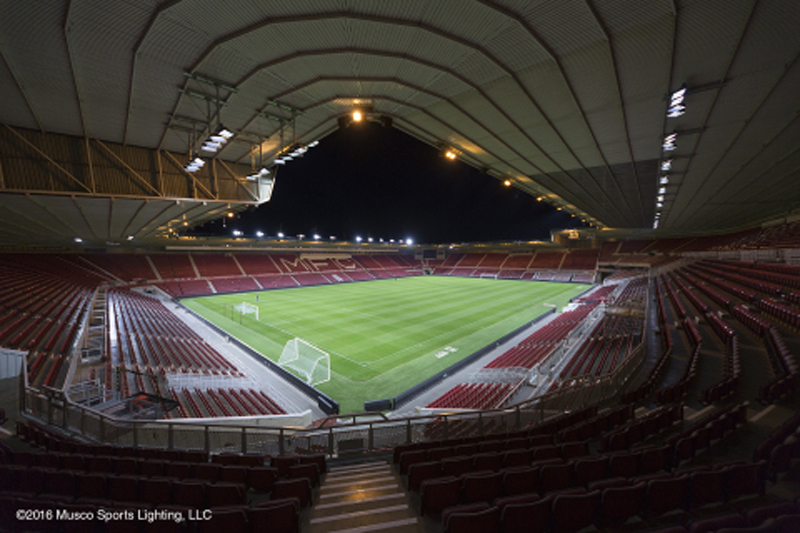 Middlesbrough FC earned its promotion back into the Premier League after finishing runners-up in the Football League Championship this past season. With a move back into England’s top football league in store, club officials set out to find a cost-efficient system that complied with Premier League lighting standards, and offered the latest in sportslighting technology. Musco’s SportsCluster Green™ LED system proved to be the ideal choice.

“Middlesbrough Football Club is delighted with the successful installation of the advanced LED lighting system supplied by Musco Lighting,” said Mark Ellis, Chief Operating Officer of Middlesbrough Football Club. “Musco completed the design and installation of the system meeting the very tight deadline in the short off season. The lights have been independently tested and fully comply with the exacting standard demanded by the Premier League. We look forward to working with Musco on other lighting projects at the Club.”

The installation of the new floodlights provides the club with several features that reduce the cost of ownership and produce a stage-like atmosphere for players, spectators and television broadcasts:

The system is also covered by a 10-year long-term parts and labour warranty backed by a team of technicians that eliminate maintenance costs and headaches for the next decade.

“Congratulations to Middlesbrough FC on its promotion to the Premier League and for the installation of a new lighting system that will turn Riverside Stadium into a showcase for energy efficiency and lighting technology,” said Jeff Rogers, President of Musco World. “Not only has the club made an investment in sustainable practices, but the new system will provide an unparalleled environment for athletes and fans, while meeting the demands of HD television.”

Since 1976, Musco Lighting has specialised in the design and manufacture of sports and large area lighting solutions around the world – pioneering systems using metal halide and LED technologies that have made dramatic improvements in energy efficiency and provided affordable ways to control spill light and glare. Permanent and temporary lighting solutions range from grassroot pitches to Olympic Games. Our global team of experts partner with customers to plan, complete, and maintain a cost-effective, trouble-free lighting solution for their facility.