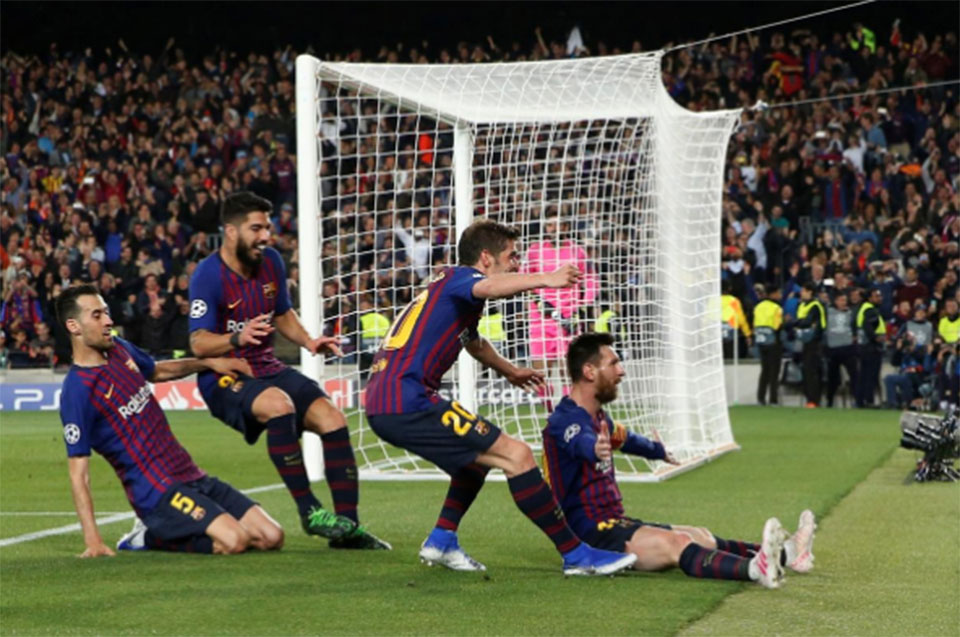 BARCELONA, May 2: Lionel Messi put Barcelona on the verge of the Champions League final with a devastating double in a 3-0 home win over Liverpool in the first leg of their last-four clash on Wednesday, taking his goal tally for the Catalans to 600.

The Argentine’s milestone goal was a moment of brilliance as he curled a dazzling free kick into the top corner from distance to add gloss to a scoreline that did not reflect the balance of play.

Yet whereas Barcelona took their chances with clinical precision, Liverpool wasted a string of opportunities that fell their way.

Former Liverpool striker Luis Suarez reminded the visitors of his superb finishing by opening the scoring in the 26th minute of a tense and finely-balanced first half at the Nou Camp, darting between two Liverpool defenders to divert Jordi Alba’s cross into the net.

Barca captain Messi scored the all-important second goal of the night in the 75th minute, chesting the ball down on the rebound and dribbling it over the line after Suarez had hammered the crossbar with a shot with his knee.

The Argentine then added to Barca’s already huge advantage to take into next Tuesday’s second leg at Anfield by smashing home his sizzling free kick in the 82nd minute.

“Four goals would have been better than three but this is a very good result,” Messi told reporters.

“We know that the tie isn’t over, Anfield is a very difficult place to go but we’re happy with the super game we played tonight. They clearly wanted to score because an away goal means a lot but they didn’t and we have a great advantage.”

LITTLE MERCY
Liverpool, who were beaten 3-1 in last year’s final by Real Madrid, played far better than the scoreline suggested, carving out a number of clear chances but spurning them all.

Barca’s South American duo of Suarez and Messi showed little mercy whenever they sniffed out a chance and condemned Juergen Klopp’s side to their first defeat in any competition since January with some ruthless finishing.

Klopp praised his side’s performance but he was not optimistic about the likelihood of a miraculous turnaround.

“I was completely happy with how we played, we played between the lines, we had chances and caused them a lot of problems,” the German told a news conference.

“If you lose away it’s not a massive problem as long as you scored a goal but we didn’t score that goal and that makes things a lot harder. We have a chance because it’s football but we had a much bigger chance before tonight.”

Suarez spared little thought for his former employers following his eventful three-and-a-half-year stay on Merseyside, as he celebrated his opening strike with relish, racing behind the goal and wagging his finger at the delighted Barca fans.

GLORIOUS CHANCE
Sadio Mane squandered a glorious chance to level for the Premier League side later in the first half but scooped the ball over the bar, while James Milner and Mohamed Salah were both denied by Barca’s excellent Marc-Andre ter Stegen later on.

Klopp’s side had done an impressive job of shackling Barca’s all-time top scorer Messi, but there was little they could do when the Argentine pounced on the loose ball after Suarez had hit the crossbar.

Messi sparked further celebrations at a packed Nou Camp with another outstanding free kick, yet the drama in this blockbuster European encounter was far from over.

Liverpool again went agonisingly close to snatching an away goal as Barca’s Ivan Rakitic scrambled the ball off the goalline only to find the feet of Salah, who somehow smashed the rebound against the near post.

Barca could have seized an even bigger advantage in the tie with two golden chances as Liverpool tired that fell to substitute Ousmane Dembele, but the Frenchman missed the target the first time then shot straight into the hands of goalkeeper Alisson Becker.