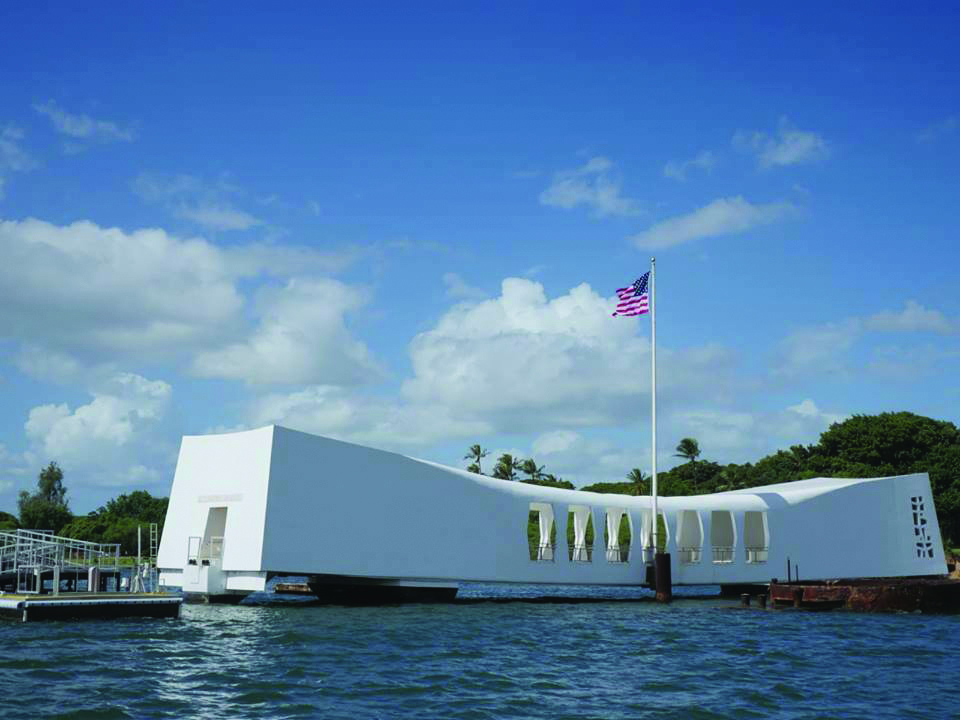 Arizona Memorial at Pearl Harbor. Around 2000 to 3000 people go to World War II Valor in the Pacific National Monument in Hawaii every day to visit memorials like this | Photo courtesy: Sarah Katz

Nepal’s struggle to safeguard independence and march to democracy and federal republic make for hundreds of stories to be told, recorded, filmed and visualized

PEARL HARBOR, HAWAII- Audience have taken their seats. The lights dim, all eyes fixated on the screen, waiting for something. There is absolute silence. “What you are going to watch is a story of life and death, heroism and sacrifice,” comes the announcement. A moment later, another announcement follows: ‘You are going to take a journey to the past, December 7, 1941.”  Silence envelops the hall further.

And the show begins.

The day was December 7, 1941, the day of Japan’s surprise attack on US pacific fleet here at Pearl Harbor, the narrator says. At the background profound music is played. “Why was our fleet attacked? Why were so many killed?”

The video then explains the history of World War II in brief, explaining how Japanese aggression was crossing the limits and what dragged America into the war that it was almost not interested to join.

“The American military knew the surprise Japanese attack on Hawaii was possible and they thought that they were prepared. On Saturday 6, 1941, most of the fleet was on port. Last  night of the peace slipped away,” the narrator of the documentary is getting somber. Then on December 7, fighter planes, the attack planes and dive bombers descended on Hawaii, she goes on. “Then 183 planes, followed 30 minutes later by 167 planes swarmed in and hit West Virginia, Oklahoma and California.” “A few minutes after at eight o’clock, Arizona.”  Big explosion on the screen thunders the hall. Inside the screen, there are fumes, smokes and fires.

“The Japanese had inflicted the US navy the greatest disaster in its history. Twenty one vessels were damaged, some 170 planes were destroyed and more than 2,400 people were killed and 1,200 wounded. They were sailors, airmen, soldiers and civilians.” There is no way of knowing how the audience is responding to this but some suppressed sobs can be heard somewhere around the corner.

Then the December 8, 1941 announcement of Franklin Roosevelt: “Yesterday, December 7, 1941, a date which will live in infamy….United States of America was suddenly and deliberately attacked by naval and air forces of the empire of Japan…. I ask the Congress declare that since the unprovoked and dastardly attack by Japan, a state of war has existed between the United States and the Japanese empire.”

It can be imagined what the audience are thinking.  But the documentary is coming to an end. The narrator concludes: “Every year, on December 7, special ceremonies are held here. The dead are honored, the heroes are remembered.” “How should we remember those who died?”  Asks the narrator and answers: “Remember the men, understand the tragedy, honor the dead. Here at Pearl Harbor they will never be forgotten.”

The visitors who make to World War II Valor in the Pacific National Monument in Hawaii are told the history of America’s loss during the Second World War, through visual narratives and cruise sailing around the sites where the US warships suffered the end in Pearl Harbor attack.  The narrative is so gripping, so moving.

To deter the Japanese aggression, the US routed its pacific fleet to Pearl Harbor in Hawaiian island. In July 1941, Japanese force seized all of Indo-China bases.  Fearing that Japan might use these bases to attack America, President Roosevelt stopped sale of American oil to Japan. This became the cause for Japanese-American hostility and—finally the Pearl Harbor attack.

At Pearl Harbor, Americans have preserved every possible bit of history of that tragic year.  Memorials have been set up over the places where the war ships were sunk. The USS Arizona Memorial, USS Oklahoma Memorial, and USS Utah Memorial—all memorials created to commemorate those who died in these battleships on December, 1941—stare at your eyes. They are communicating something to you. Americans have preserved the names of the heroes in engravings.

At Pearl Harbor, the story of tragedy is narrated so poignantly that every audience comes out of the hall with moistened eyes. People look at each other with silence. There is sense of gloom in everyone’s face.

“It’s so sad. Very tragic. The devastation, the war and the losses it caused are unimaginable,” said Butsie Duhon, who had come to Honolulu all the way from New Orleans with his wife, Sandy Duhon. “Thanks to the heroes who fought for the country. Thanks to them for their sacrifice. Without them we would not have been here now,” Butsie said holding Sandy’s hand. “I was heartbroken to see what I saw,” Sandy added. “But good thing is that the country emerged stronger and more powerful after that tragic event.”

“We could not do without coming to this place and paying respect to the heroes.”

“The 1941 attack was the worst blow to our country. Think of the loss of lives,” Dale Beckstrom from Utah said. “I come here whenever I come to Pearl Harbor to pay homage to the dead.” “But thanks to Americans, we started rebuilding. And what’s better, the adversaries 77 years ago are allies now,” he said.

At Pearl Harbor, it’s solemn moment every day. Visitors who come here struggle to come to terms with the tragedy that almost ravaged the whole country and that also came to be, for good or bad, the defining moment of world history.

From 2000 to 3000 people, “including a lot of Japanese,” visit these memorials, according to Tony Steward, interpreter at National Park Service of World War II Valor in the Pacific National Monument. “It’s a solemn moment here, everyday,” he said.

One of the thoughts that overpowered me during the visit to the historic site was: Have we maintained, or even cared, to preserve the history for future generations? Have we created visual narrative of the events of the past? Can we create memorials and visual narratives of the country’s past?

The world just celebrated centenary of World War I.  Nepal is one of the worst sufferers of World War I and II—though Nepal had nothing to do with these two historical tragedies.

During the World War I, “Gurkha regiments officially suffered over 20,000 casualties and together with the influenza epidemic of 1917 led to the apparent decline in the population of Nepal between 1911-1920 from 5.6 million to 5.5 million,” writes David Seddon in one of his recent Nepali Times columns. “There has been no detailed study of the social impact at the local level in those communities from which the majority of troops were recruited.”

There were as many, or even more, deaths during the World War II. But how do we remember them? How many memorials have constructed in their names? How many people visit them?

Nepal’s struggle to safeguard its independence, its march to democracy and federal republic—and various movements that occurred in between—make for hundreds of stories to be told, recorded,  visualized and filmed.

Some contradictions and contestations aside, story of Nepal has a linear pattern—making of the unified nation, its expansion, Chinese and Colonial British invasion, shrinking of its territorial space, its struggle for safeguarding sovereignty and independence, the actors who contributed for this cause, the heroes who fought for it, so forth and so on.

We need to be telling these stories to our children and their children. It is for this that museums are created, memorials are erected and the actors of history are remembered.   How events of the past shape future is a matter of debate. But if we can preserve memories of past and of our times, we will be writing textbooks of history for future generation.

How they will read (or misread) those textbooks is up to them. But they will need something to look upon, lean on and learn from. The investment in preserving history is always the worthwhile investment.

In the life of a nation, as in the life of an individual, there are ups and downs, there are happy and tragic moments, and there are stories that need to be handed down to future generations. Those who fail to preserve vital memories of their societies and nations, risk losing many things.

Was the Nepali state discriminatory toward certain languages, castes, cultures and peoples? Sujit Mainali tells us, it was but not... Read More...