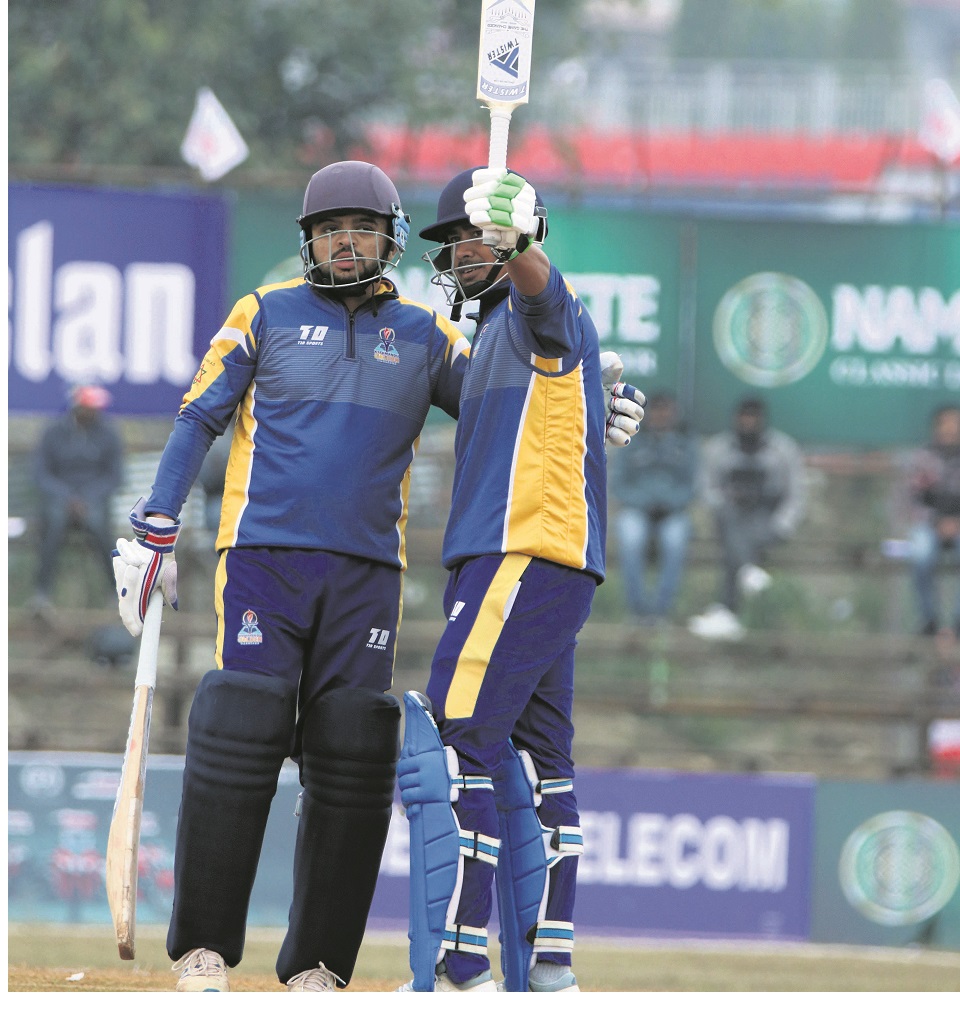 Paltan was bundled out for 100 runs chasing a target of 146 put up by Titans to concede its second defeat in a row. Paltan earlier lost the match against Chitwan Rhinos on Tuesday whereas Titans notched its first win after losing against Expert Dhangadhi Blues by five runs in the first match.

Rohit Kumar Paudel and Kushal Bhurtel scored 32 and 24 runs respectively but failed to get any support from the other end as Paltan eventually folded out in 19.5 overs.

Similarly, Mehra, Pakistan bowler Noman Khan and left-arm spinner chipped in with a wicket each.

Earlier, Paltan won the toss and invited Titans to bat first. Titans innings got a good start with 50 runs on board without any loss at the end of 8 overs.

However, the innings was at trouble at 76 runs for the loss of five wickets.

Mehra smashed four sixes and five boundaries during his 26-ball unbeaten 61 runs. He shared the partnership with Raju Rijal who chipped in with a run-a-ball unbeaten 9 runs.

Vesawkar picked up a brace whereas Sarabjit Ladda and Kushal Malla shared a wicket each.

Paltan will next face Butwal Blasters in an important match on Friday whereas Titans will face Kathmandu Golden Warriors on Saturday.

The match was reduced to 17 overs per side after overcast conditions delaying the proceedings.

The outfield was wet due to overnight dew.

Player-of-the-match Malla smashed eight boundaries and nine sixes in his 37-ball century to help Warriors put up 185 runs in 17 overs before dismissing Blues for 79 runs in 16 overs.

Blues won the toss and invited Warriors to bat first.

The partnership of 51 runs between Amit Shrestha, who replaced Subash Khakurel in the playing XI, and Jaikishan Kolsawala helped Warriors set up an early platform after losing Gaurav Tomar for a duck.

Shrestha’s 21-ball 34 runs was the ice-breaker that inspired Warriors to play their shots in overcast conditions at the ground.

Kamal Singh Airee picked up four wickets, three of which came in the last over of the innings. He bowled four overs conceding 37 runs.

Sagar Dhakal was the only other wicket-taker of the innings, who conceded 19 runs off three overs.

Amit Yadav, Bikram Thagunna, Captain Dipendra Singh Airee and Anil Kharel were wicket-less in their respective overs in the match.

Similarly, Amrit Bhattarai and Susan Bhari shared a wicket each to help bundle-out Blues for 79 runs.
Canadian opening batsman Srimantha Wijeyratne top-scored for Blues with 15 runs off 12 deliveries whereas Thomas was the only other batsman who reached double-digit with 10 runs.

Blues had won the match against Biratnagar Titans by five runs. It will face Chitwan Rhinos on Friday.

Rhinos had defeated Pokhara Paltan in its first match on Tuesday.

Warriors will face Titans in another must-win match on Saturday. Warriors had lost against Butwal Blasters and Pokhara Paltan.

POKHARA, Oct 27: The Pokhara Premier League’s (PPL) first match was welcomed with open arms among the people of Pokhara as... Read More...

POKHARA, Oct 26: Pokhara Premier League has started on Friday. In the first match of the tournament, Pokhara Paltan is... Read More...

Pokhara Paltan sets the target of 198

POKHARA, Oct 25: Pokhara Paltan has set the target of 198 runs in 20 overs. Biratnagar Titans had elected to... Read More...

Child goes missing in a drain in Kathmandu. Who is responsible?
9 hours ago
'No changes made in the tax imposed on sanitary pads in new budget'
21 hours ago