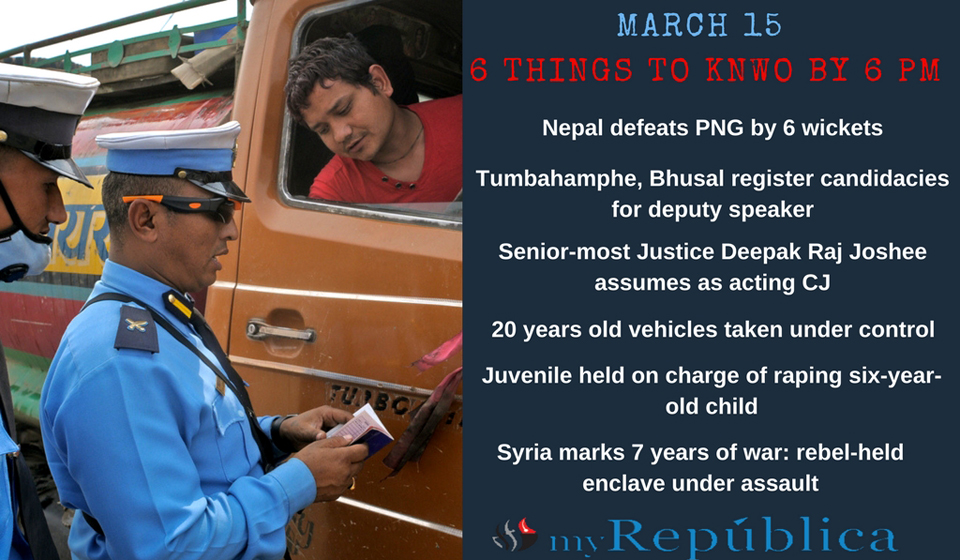 Nepal has defeated Papua New Guinea by six wickets. Chasing the target of 115 runs set by PNG, Nepal met the target losing four wickets with remaining 162 balls. In the play-off under the ICC World Cup Qualifiers underway in Harare, Zimbabwe on Thursday, with the contribution of half-century score by Dipendra Singh Airee including one four and three sixes off 58 balls, Nepal reached the target of 115 runs.

Shiva Maya Tumbahamphe from ruling CPN-UML and Puspa Bhusal from main opposition party Nepali Congress have registered their candidacies for the post of deputy speaker on Thursday. Both are elected to the federal parliament through proportional representation.

Senior-most Justice Deepak Raj Joshee has assumed the responsibility as acting Chief Justice and formed benches to hear the pending cases at the Supreme Court on Thursday. Joshee has taken the responsibility as the acting Chief Justice after Judicial Council Secretariat handed Parajuli a retirement letter stating that his term expired on August 5, 2017.

The District Police Office Chitwan has started taking old motor vehicles under control. Till 11:00 am today, the district traffic has taken three two-decades-old vehicles (two trucks and one bus) under its control from Khairhani and Gondra. These vehicles were found plying on the roads, violating the order of the Department of Transport Management, Office Chief Police Inspector Santosh Panta said.

The District Police Office, Rolpa has taken a 13-year-old boy held on the charge of raping a six-year-old girl. The boy allegedly raped the girl Monday evening as she was out of her home for playing, police said. According to Deputy Superintendent of Police Gyanendra Prasad Phuyal, the girl's family accused the boy of raping her taking the advantage of dusk time. ​