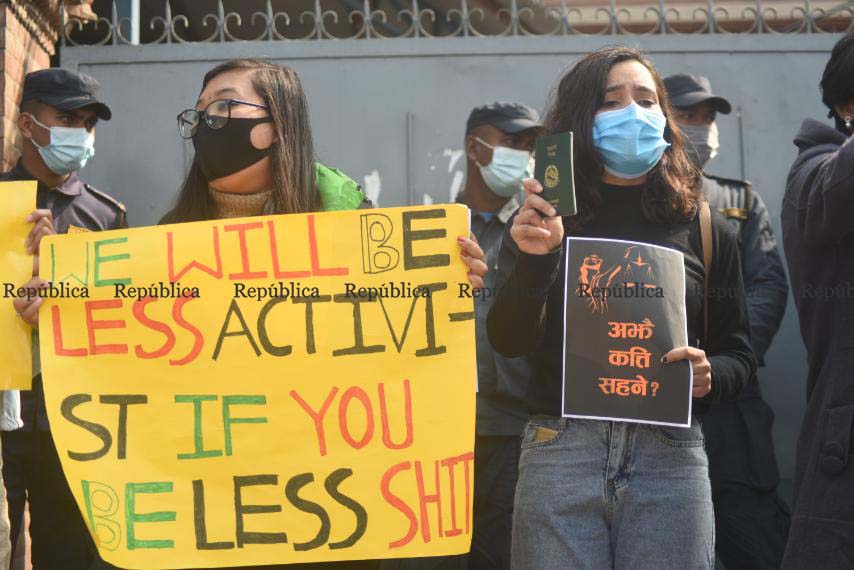 If the government really wants to ‘protect’ women it needs to make the country safe from violence, prejudices, practices and laws that harm and humiliate women.

Every time I felt humiliation as a girl and later as a woman at the hands of government officials, I always picked up my pen to write about it but I never published it. As the government recently formally contemplated restricting travel to women under 40, thinking we still need permission, I feel I cannot keep my thoughts inside me anymore. I say formal because informally the mindset, attitude and behaviour have persisted for years even without the recent proposed rule on travel for women.

I am 41 now. Starting at the age of 17 I have been travelling. First with my parents but later by myself. It is still fresh like yesterday, the first humiliation by an immigration officer who told me to step aside and asked his superior to check my papers and give the permission to board the flight. I was made to wait as the superior leered at me and after a while said, 'tapainharu jasto ketilai bides ma ke hunchha thaha chha? (do you what happens to girls like you in foreign countries?) I knew what he meant but it was the way he asked, it was the way he looked. If protection was the concern then I was made to feel vulnerable by my own government as if I, as a young girl, was somehow to blame for it. Every year since, it has been one thing or the other that immigration officials have asked me that repeatedly reminds me what the government thinks of half of its population. Some of the worse ones I have faced at the airport include asking me why I have not dolled up in sindoor, pote and tika like a newlywed if I was indeed married and deliberately not stamping my boarding pass and later asking to step aside (again) and being accused of trying to dupe the system. On every occasion I would fight back only to be told to shut up.

The pinnacle of misogyny and patriarchy that persists in our government and bureaucracy came when I went to get my passport renewed. The processing officer in my jilla (district) that you first need to visit, looked at me through the window, checked the age on my application, and asked if I was married. I was 35. I asked back why that was of concern for my passport since there was nothing on my application about my marital status. He responded by saying that it was because of my age but apparently, I had not put any conventional markers of marriage that he could see from his 2 X 4 window.

It did not matter that I am a citizen of a country lawfully requesting to renew my passport but somehow my marital status was of paramount concern. The asking back, talking back and challenging him on his notion of what a married woman of my age should wear meant that I was asked to step aside (again) and consult his superior on whether my passport could be renewed. The superior was far worse. He screamed and yelled, arms flailing, and asked if I had even bothered to seek permission from my husband and why I had attempted to get the passport through my father's name. He threw my papers saying, "even if the PM calls me, I will not approve your passport." My only crime in their eyes was that I was a woman who did not fit their bill. Nothing more. The logic for years has been simple, you are meant to sit quiet and accept the misogyny heaped on to you especially by men in bureaucracy and government that interpret the rules or make rules that is meant to teach you where you belong in our country as a woman. We are apparently so weak and without agency that we need to be kept protected.

So, I am not even a bit surprised that our government tried to push for such an archaic and moronic rule of restricting travel for women under the guise of protection because even without it, the practice has been there for long. The entrenched patriarchal entitlement has given a free ticket for years to the power holders and bureaucrats to treat and silence women however they please in whatever area. If the government really wants to ‘protect’ women then make the country safe first—safe from violence, safe from prejudice, safe from practices and laws that harm and humiliate women. It is not an outsider we as women need the protection from, but it is from the patriarchy inside that even the government continues to perpetuate on its own citizens. Clean the corrupt system, educate the bureaucrats at all levels to provide non-discriminatory services to the citizens, update the laws so that you accept half of your own population as you should—equal and more than capable.

No decisions taken yet to put off scheduled examinations of Grade XII: State Minister Shrestha
22 hours ago

Average length of stay of third-country visitor in Nepal increases from 12.7 days to 15.1 days
11 hours ago

Harvesting yartsa gunbu during the pandemic
5 hours ago