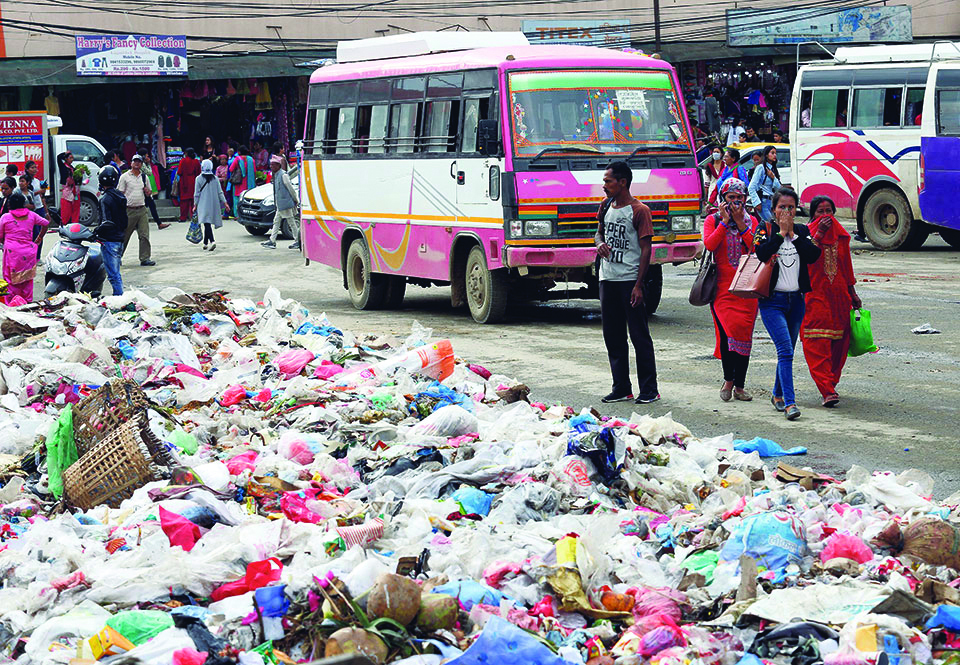 The author is an Environmental Consultant at Wind Power Nepal Pvt Ltd
news@myrepublica.com

Unmanaged waste has adverse impact on public health and economy. The government should manage it properly

Waste management has become a major problem in Nepal, whether in Kathmandu Valley or at majestic Mt Everest. Though there are simple and proven method of waste management, such as three Rs (reduce, reuse and recycle), we are somehow still lagging behind. Segregation of waste at source, a basic foundation for waste management, is hardly being implemented anywhere.

Furthermore, most municipalities are not even collecting the wastes that are being generated. A survey conducted by Wind Power Nepal in 2017 and 2018 shows that Dhulikhel municipality collects about nine tons, Gorkha 7.5 tons, Hetauda 25 tons, Damak 14 tons and Bhadrapur 12 tons of waste daily. The collection efficiency of these municipalities was just 55-60 percent of the total waste generated and even these wastes were not managed properly.

Some municipalities practiced open dumping on the city outskirts or nearby riverbanks. At the dumpsite, informal waste pickers scavenge for recyclable and reusable materials and help to reduce about 20 to 25 percent of the waste and then burn the residual to reduce the volume. This practice of unregulated combustion emits harmful toxic gases posing numerous public and environmental health issues. Besides, the leachate generated from the open dumping site contaminates soil and water resources.

Fortunately, most of the municipal waste (more than 50 percent) in Nepal consist of organic waste, which can be converted into biogas and compost fertilizer—both valuable commodities for the country. However, processing huge amount of municipal waste requires sophisticated technology and money. Economic analysis of ongoing large-scale biogas projects in Nepal shows that these projects are only viable with upfront capital subsidy. A proper understanding of the cost against benefits is a must prior to the project implementation. In general, a biogas plant with a capacity to process one ton of organic waste daily would cost around five million rupees to build, and the cost goes down with increase in the scales of production. The project with at least 40 tons per day (TPD) capacity can become commercially viable, due to increased revenue from high gas yield and fertilizer.

Large-scale biogas is a fledgling technology in the context of Nepal. Installation of biogas plant will make use of methane generated from the biodegradable organic waste, thus, reducing the green house gas emissions in the atmosphere and is expected to replace firewood and fossil fuels. It is estimated that a ton of organic fraction of municipal solid waste generates about 56 cubic meters of biogas (25 kg of bio-CNG), which is equivalent to 25 Kg of LPG, 33.6 kg of kerosene and 196 kg of firewood. Moreover, converting one ton of organic municipal waste into bio-CNG will annually substitute Rs 1, 24,614 of Nepal Oil Corporation’s loss in addition to replacement of imported fossil fuel costs.  On the other hand, 208 kg/day of compost fertilizer is generated from a ton of municipal solid waste (MSW) along with biogas.  Nepal experiences fertilizer supply deficit almost every year. In the year 2016/17, the actual supply of fertilizer was 3, 24,977 metric tons wherein the potential demand was about 7, 00,000 metric tons. The supply of organic fertilizer will largely benefit farmers in a country like Nepal where more than 66 percent of people are directly involved in farming and 26 percent of its land is being used for agriculture. Thus, implementation of a biogas project to treat municipal waste would encourage sustainable industrial practices to combat climate change and increase agricultural productivity.

Unmanaged waste has adverse impact on public health and economy.  It is the government’s responsibility to manage it properly. Each municipality should consider waste management as a business opportunity and use sustainable mechanisms such as waste-to-energy to manage municipal solid waste.