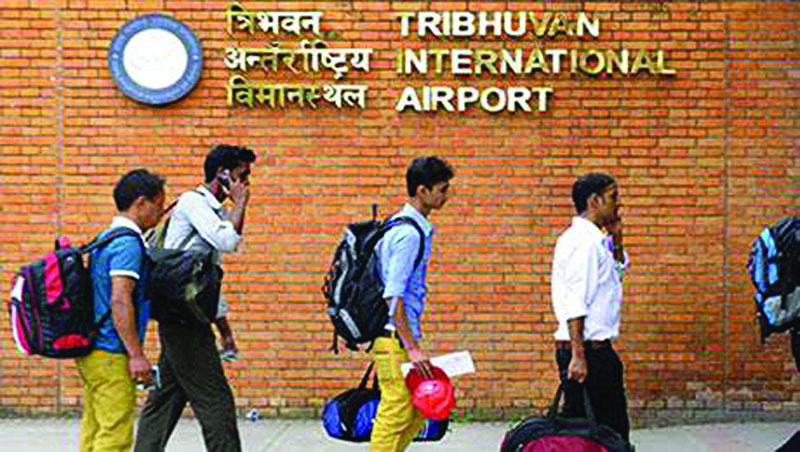 The author served as Nepal’s Permanent Representative to UN, Other International Organizations and WTO from 2014 to 2019 in Geneva
news@myrepublica.com

The Global Compact for Migration has finally provided policy architecture for international governance of migration. This step was long overdue within the UN system because a number of member countries held that migration was exclusively a bilateral issue between the sending and receiving countries.  Two factors led to changing global views on migration.

The first was the increased realization that migration contributes to development of both host and origin communities and the migrant workers as the agents of development are entitled to better protection of their fundamental human and labor rights. Scientific studies have revealed that migrants are three times more productive than the native population and they, currently constituting 3.2 percent of the world population, produce nine trillion dollars worth global GDP. So the institutions like Global Forum on Migration and Development, among others, started to raise the voice that migration is for development and a harbinger of win-win for all sides.

The second factor that prodded the international community to bring a universal migration policy was the circumstances created by large movements of people across border into the developed world in search of jobs or asylum, particularly in the first half of the current decade, in their attempt to escape the world order increasingly marked by inequality, injustice and lack of opportunities. Migration got into mainstream UN agenda in 2016 when a modality resolution for formulation of two separate compacts for refugees and migration was adopted. Subsequently, the Global Compact for Safe, Orderly and Regular Migration (GCM) was endorsed by the UN in December 2018.

Available data shows that in 2017, 258 million people lived outside their countries of origin. Around 62 percent of the total migrants are labor migrants looking for economic opportunities in more advanced economies. The trend of cyclical South-South labor migration within the same region has significantly increased over the years, and in case of Asia it is said to be over 50 percent of the total overseas migration.

Both positive and negative narratives abound on various aspects of migration, but it is true that migration has contributed to poverty reduction, equitable distribution of wealth, promotion of peace, justice and equality, and even to achieving sustainable development goals across the world. The 2030 Agenda for Sustainable Development therefore emphasizes on the importance of safe, regular and orderly migration as one of the important tools for achieving SDG goals and targets. Inherently a cross-border issue, international migration can be better governed within the ambit of international and regional policy frameworks and the pragmatic measures that emanate from such wider initiatives to influence bilateral behavior.

While fully acknowledging the sovereign right of individual member countries on deciding their own migration policy, the GCM draws on the mutuality of benefits organized and managed migration can bring to the host and origin communities and the migrants themselves. It takes a human rights-based approach to migration and puts the migrants at the centre, while laying out a comprehensive set of principles and objectives as well as governance and management issues surrounding the migrants for attainment of common benefits. The GCM further enshrines labor migration as one of the important pillars for its clarity of purpose and applicability within the policy framework.

The three important issues the GCM discusses as action agenda for improved governance of labor migration are protection of the fundamental human and labor rights of the migrant workers through all stages of migration, empowerment of migrant workers by imparting knowledge, orientation and skills throughout the cycle and through a system of skill partnership and effective complaint and redress mechanism, including access to justice, in case of violation of the terms and conditions of contract or inalienable rights  by the employer.

Looking at the complexity and sensitivities attached by nations to the migration process, the GCM suggests the fostering of multi-stakeholder cooperation and collaboration at the international, regional, bilateral, national and subnational levels for its systematic implementation.

Nepal has been the chair of the Colombo Process (CP), a consultative forum of 12 Asian nations on overseas migration and management of foreign employment, since March 2017. The five thematic areas of actions pursued by the CP members—skill and qualifications recognition process, pre-departure orientation and training, ethical recruitment, optimizing the benefits of remittances and labor market analysis—are in line with the objectives set by the GCM. In fact, Nepal played a constructive role in formulating a CP Joint Recommendations to the GCM during the consultative phase, and almost all of the recommendations were incorporated into the GCM document. The Colombo Process has already shown its commitment to the implementation of the relevant objectives and action points of the GCM through the Kathmandu Declaration adopted during the fifth Ministerial Consultation held in Kathmandu in November last year.

The CP member countries constitute 50 percent of world population and contribute around 30 percent of the overseas migrant workers. Their voice and representation in shaping the international migration governance therefore bears meaning in the contemporary world dispensation. Though still modest in achievements, the initiatives taken under the CP such as sharing of best practices, regular dialogue and consultation for problem-solving in burning issues of labor migration, skills mapping, design of common pre-departure orientation module, and working on ways and means of promoting ethical recruitment and labor market information are steps in the right direction.

The Abu Dhabi Dialogue (ADD) is another regional consultative process which has brought the perspective of the destination countries of Asia, particularly the GCC countries and Malaysia, for improving the quality of labor migration and mobility through dialogue and cooperation. ADD has emphasized the need to ensure skill and job matching and comprehensive information and orientation program for the workers through all stages of migration.

Nepal is now in a position to negotiate GCM-compliant labor agreements with regular and potential destination countries in more preferable terms. It is possible because 152 UN member countries, including all of the traditional destination countries for foreign employment for Nepali workers, have signed the compact. Subsequently, new labor agreements have been signed with Malaysia, Jordan, Oman, UAE and Japan.

However, migration has always remained a sensitive national issue for countries of destination and so ideal policy framework alone is not a sufficient end to ensure the rights and welfare of the workers. Our national capacity at the technical and diplomatic levels, involving Ministry of Labor, Employment and Social Security (MOLESS) and Ministry of Foreign Affairs (MOFA) and the relevant organizations under them, must be strengthened in a coordinated way to handle all prospects and challenges that emerge in the international labor market. Recurring problems and their pragmatic solutions must draw our attention in the first place.

In Nepal, 56 percent of households are receiving remittances and the overall contribution of remittances to the GDP is around 30 percent. Concurrently, Nepal is increasingly falling short of meeting labor demands in several areas of the economy and becoming a destination country for low and semi-skilled workers from the neighborhood, which takes away around US $ 3 billion in outward flow of remittances. This calls for a balanced approach to meet the requirements of domestic labor market and those from the destination countries in all skill categories in a planned manner.

Effective labor sector reforms based on tripartite social dialogues, involving the government, employers and workers, and reassurance of dignity and respect for labor in society is a prerequisite for achieving this balance on the domestic front.  Meanwhile, there are a number of considerations to be taken up seriously to improve the condition of labor migrants.

Ensuring fair and ethical recruitment practices by influencing the demand side of the market and empowering the local agents to directly deal with the principal employers or their sole agents in the market place is the critical first step to protect the rights and interests of the workers. Wherever possible we must make the best use of zero cost employment or ‘employer pay principle’ by taking manpower agents in strict confidence.

Orientation and skill has always been a weak point in our foreign employment management (more than 75 percent people who leave the country are unskilled).  To change this profile, a multi-stakeholder focus on skilling, up-skilling and reskilling of migrant workers as well as establishing skill partnerships with the destination countries and mutual recognition of prior learning or acquired skills can be an effective tool. Skilled migrants have higher mobility and choice of jobs and increased potential to earn and remit more.

Proper analysis of the root causes of the existing problems in foreign employment in general, and specific situations of the destination countries in particular, would bring us closer to where and what interventions are needed. Mere counting of the recurring problems would not lead to solutions. We should aim to solve these problems as per the principles and objectives of the GCM and the good practices established under the regional consultative processes like Colombo Process and ADD. Bilateral political, economic, social and other relations should also be capitalized in this respect.

More constructive multi-stakeholder engagement in all phases of migration and wider dialogue and cooperation at international, regional and bilateral levels are essential for better management of foreign employment and protection of the rights of the workers. We should start from home and continue through the markets where the workers are engaged.

The author served as Nepal’s Permanent Representative to UN, Other International Organizations and WTO from 2014 to 2019 in Geneva