Man explodes small device outside US Embassy in Beijing 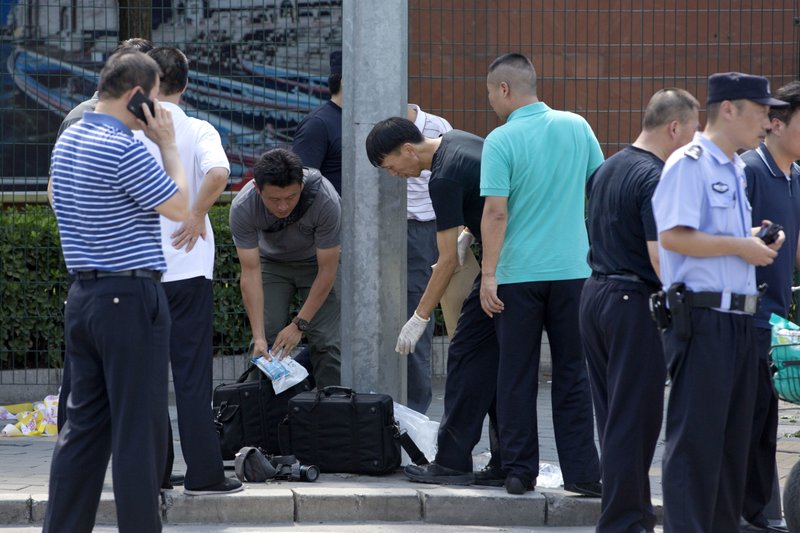 Chinese officials work near the site of a reported blast just south of the U.S. Embassy in Beijing, Thursday, July 26, 2018. (AP Photo/Mark Schiefelbein)

BEIJING, July 26: A man exploded a small homemade bomb outside the U.S. Embassy in Beijing on Thursday, injuring only himself, according to police and an embassy spokesperson.

Photos on social media showed a large amount of smoke and police vehicles surrounding the embassy shortly after the incident. Apart from a heightened security presence, the scene outside appeared to be normal by early afternoon.

The Beijing Police Department posted a statement on its website identifying the suspect only by his surname, Jiang, and said he was 26 years old and a native of Tongliao city in the Chinese region of Inner Mongolia. He was injured on the hand by the explosive device, which was made from fireworks and was detonated at about 1 p.m., police said.

There was no word on a motive and the statement said the investigation was continuing.

No damage was done to embassy property and no other injuries were recorded, a U.S. embassy spokesperson said, speaking on routine condition of anonymity.

Only one person was involved and police responded to the situation, the spokesperson said.

Neither the police nor the embassy had any comment on a report by the ruling Communist Party newspaper Global Times that said officers had earlier removed a women from outside the embassy who had sprayed gasoline on herself in a “suspected attempt at self-immolation” at around 11 a.m.

China and the U.S. are in the middle of a trade dispute, but America remains a hugely popular destination for travel, education and immigration for Chinese citizens.

On weekdays, large lines of visa applicants form outside the embassy, which sits in a busy corner of the city hosting numerous diplomatic installations as well as hotels and stores.

Seminar on Hydropower held at Embassy of Nepal in Beijing

The program brought together prospective Chinese investors as well as senior officials of three hydropower-related companies of the Government of... Read More...