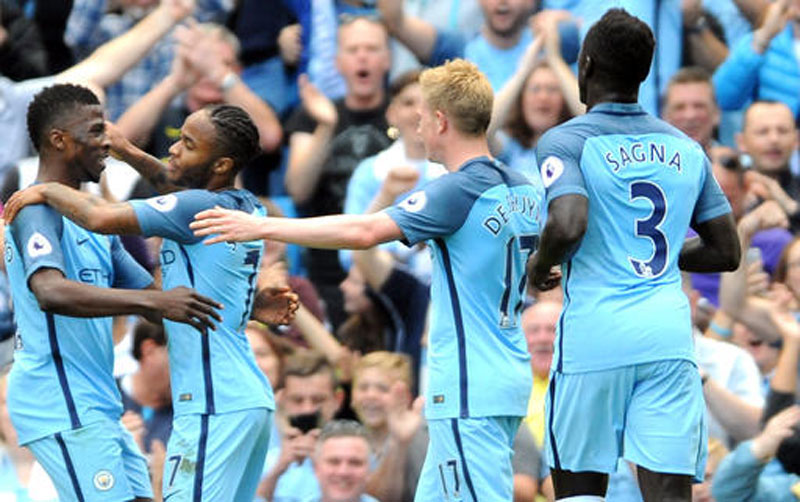 Manchester City's Kelechi Iheanacho (left) celebrates with teammates after scoring during the English Premier League soccer match between Manchester City and Bournemouth at the Etihad Stadium in Manchester.

Kevin De Bruyne and Kelechi Iheanacho scored in the first half, before Raheem Sterling and Ilkay Gundogan added more goals after the break.

An 86th-minute red card to Nolito, for motioning a head-butt on Adam Smith as they squared up, took the gloss off another impressive display by City under Pep Guardiola. City has scored 15 goals in five league games so far.

Having also won three games in the Champions League, City has opened the season with eight victories for the first time in its 136-year history.

De Bruyne was the inspiration behind City's 2-1 win at Manchester United last weekend with a goal and assist, and he was the team's creative force here.

The Belgium midfielder's goal came via a cheeky free kick, shooting underneath a jumping wall in the 15th minute to get City rolling.

But De Bruyne's moment of the match came in the 66th when he found more space and threaded a perfect angled through-ball to Gundogan, who ran into the area to meet the pass with a low finish that outfoxed goalkeeper Artur Boruc.

No wonder De Bruyne was afforded a standing ovation by City fans when he was substituted late on.

In between those strikes, young forwards Iheanacho and Sterling set each other up for goals on the counter-attack as Bournemouth paid for its mistakes.

The 19-year-old Iheanacho, filling in for the suspended Sergio Aguero, notched his third goal in as many games this week by adjusting his feet and tapping into an empty net in the 25th after Sterling got in behind Bournemouth's defense from De Bruyne's pass before squaring the ball across the face of the six-yard box.

Iheanacho returned the favor to Sterling in the 48th — and again the catalyst for the flowing move was De Bruyne, who slipped another pass through to the striker. Instead of shooting, Iheanacho cut the ball back for Sterling to bundle home his finish.

Aguero will be back for City's next league game but Nolito faces three matches out after his red card, which came after Smith ran onto him off the ball. The pair went forehead to forehead, and Nolito made an aggressive forward motion that got the referee's attention.

It was the first clean sheet in the league under Guardiola and City has started a second successive league campaign with five wins in a row.