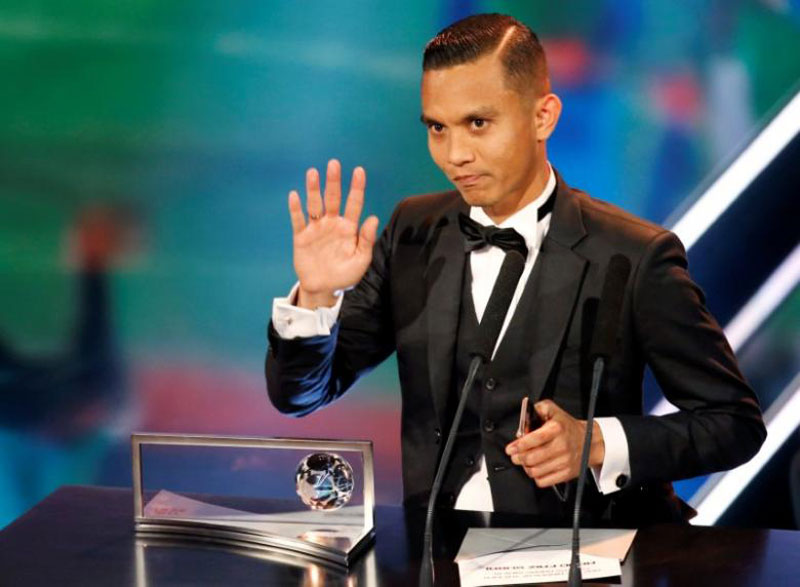 Asia's first Puskas Award winner Mohd Faiz Subri was given an enthusiastic homecoming on Wednesday as Malaysians continue to celebrate his wonder goal.

Around a hundred fans decked out in national team colours cheered and waved Malaysian flags to welcome Mohd Faiz, who was clearly taken aback by the reception, on his arrival at Kuala Lumpur International Airport.

"Thank you. Thanks for supporting me. Thanks for voting," a nervous Mohd Faiz told the fans.

Mohd Faiz's long-range, swerving free kick won almost 60 percent of the vote at FIFA's 2016 awards ceremony and has restored some pride in Malaysian football, which has suffered a decline over the past four decades.

The Penang FA player received the award established in 2009 and named in honour of Hungarian great Ferenc Puskas in Zurich on Monday, making him a member of an elite club that includes Cristiano Ronaldo, Zlatan Ibrahimovic and Neymar.

"I hope this win will encourage (Malaysian footballers) to work harder to succeed not only on an individual level, but on a national level as well," said 25-year-old student Sadiq Asyraf, who was part of the welcoming party.

The national team are ranked 161st out of 209 countries, a far cry from their time as a regional powerhouse in the last century.

Malaysia qualified for the 1972 Munich Games, where they beat the United States 3-0 but lost by the same score to West Germany and 6-0 to Morocco.

However, the match that defined the "Golden Era" was their 2-1 victory over South Korea which earned them a spot at the 1980 Moscow Olympics, which Malaysia eventually boycotted over the Soviet invasion of Afghanistan.

That was the last time Malaysia qualified for the Olympics and a nationwide match-fixing scandal in the mid-1990s as well as a decline in fan interest, who prefer to support sides in the English Premier League, have contributed to the sport's demise.

Princess Jayanti Achievement Award given away