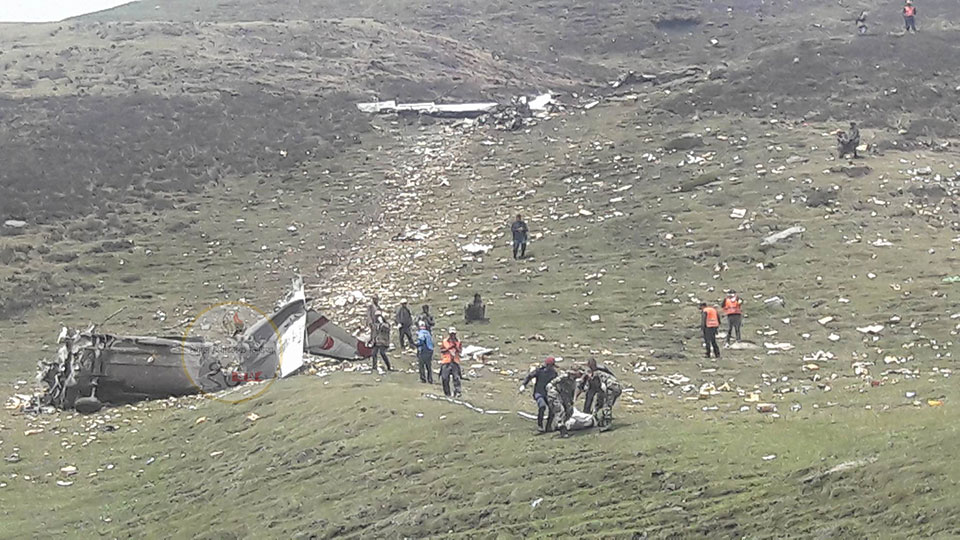 KATHMANDU, May 17: A Cessna 208B aircraft of Makalu Air flying to Simikot airport of Humla district from Surkhet airport  crashed on Wednesday, killing the pilot and co-pilot. The cargo flight of the light aircraft with call sign 9N AUJ went out of radar contact at 6:45 am.

The Civil Aviation Authority of Nepal (CAAN) working  in coordination with local police found the crashed aircraft at Kharpunath Rural Municipality – 2, Humla at around 10:30 am, according to Makalu Air.

Most remote areas across the country including Humla are dependent on such aircraft for the supply of basic goods. Several airline companies are carrying such basic goods for the locals in the country’s remote areas. The  Makalu Air aircraft was carrying a cargo of 1,170 kilograms.
Makalu has been in operation  since 2009.

Captain Kiran Bhattarai and co-pilot Aditya Nepali lost their lives in the crash. The bodies landed at Kathmandu airport at 3 pm, the airline told Republica. It further said that both the pilot and co-pilot of the ill-fated plane had more than a decade of experience.

Sanjeev Gautam, director general of CAAN,  said that no reason has been found for the  crash as of Wednesday evening.

The Ministry of Civil Aviation on Wednesday evening formed a four-member committee to investigate the crash. The committee has Triratna Manandhar, former director general of CAAN as coordinator, and Upendra Lal Shrestha, senior engineer of Buddha Air; Gopal C Bista, senior captain of Nepal Airlines Corporation; and Buddhi Sagar Lamichhane, joint secretary of the Ministry of Civil Aviation, as members.

According to CAAN, a technical team has already been sent to  Simikot for  investigations. It will submit a preliminary report. However, the exact reason for the crash might not yet emerge.
On November 29 also, a Twin Otter of Tara Air had crashed in Humla, injuring seven people on board.

KATHMANDU, May 28: Government has formed a commission to investigate into the causes behind the Summit Air aircraft crash at... Read More...