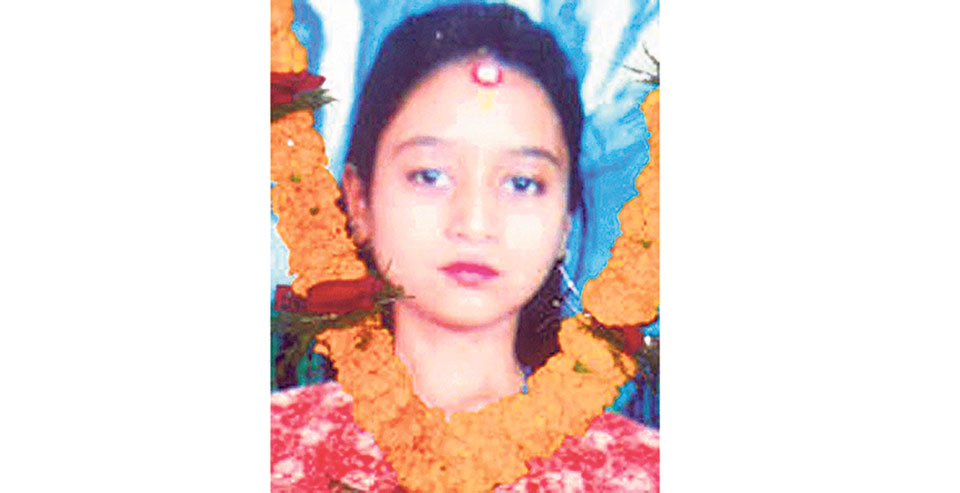 KATHMANDU, Aug 19: Nepal Army has approached the family members of Maina Sunar, a 15-year girl from Kavre who was abducted and killed by the army during the armed insurgency, apparently in an attempt to settle the case out of the court, it has been learnt.

On the night of February 17, 2004, the girl was taken away from her home by army personnel and was disappeared. Her family and human rights advocates pressured the government to reveal her whereabouts and it later emerged that she was tortured to death in the army barracks in Panchkhal.

Devi Sunar, Maina’s mother, has been fighting for justice for years. But this year, army officials approached Devi twice with various offers, she said. According to her, they have proposed to set up an endowment fund in Maina’s name at Kavre’s Bhagwati High School, where Maina studied, and install her statue. Devi’s family believes these offers were made in an attempt to seek a compromise.

She, however, declined the offers saying she wants nothing less than justice for her murdered daughter.

During the meetings, army officials had expressed their willingness to do some charity work in Maina’s name and sought our approval, Devi told Republica. “During two separate meetings held [on June 19 and July 15] officials from army’s peace keeping operations department offered to construct a new building in Maina’s name at her school or set up an endowment fund in her name for social work. They have also offered to install Maina’s statue,” said Devi adding, “I declined their offers fearing that these might undermine our ongoing struggle for justice.”

At the meetings, army officials had told her that the meetings were held at the army chief’s behest. The meetings, according to them, were initiated after the army’s image was tarnished at the international level after Maina’s murder.

In April 2017, the Kavre District Court had convicted Colonel Bobby Khatri and captains Sunil Prasad Adhikari and Amit Pun in the Maina murder case. The court had slapped life terms on them.

The court, however, acquitted Major Niranjan Basnet, who was among the accused, stating that the evidences against him were insufficient.

Dismayed by the court’s verdict the army in 2017 had filed a writ petition at the Supreme Court, demanding that the life terms on three former army officers issued by the Kavre district court in the Maina Sunar murder case be annulled.

The writ petition filed by Captain Saroj Regmi on behalf of the army has named the Office of the Prime Minister and Council of Ministers, the Office of the Attorney General, the Ministry of Peace and Reconstruction, Kavre District Court and Maina’s mother among others as defendants. The writ petitioner has also claimed that Kavre district court breached its jurisdiction while handing down the verdict.

Also, it has argued that the three officers were already punished by a military court of inquiry and that the district had breached its jurisdiction while issuing the verdict. The writ petition is still pending at the Supreme Court.