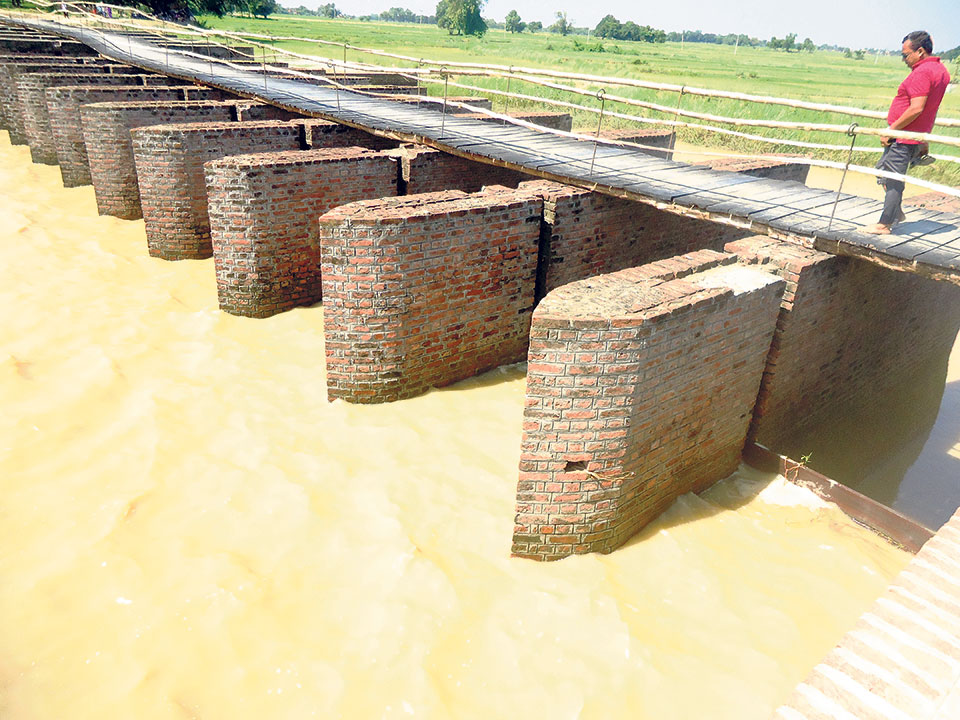 KAPILVASTU, July 22: Fursat Ali Dhuniya, 75, a farmer of Bhagwanpur village, planted paddy in three bighas of his farm three weeks ago. Due to incessant rainfall in the area and inundation by a nearby river in the area, the farm is now mostly submerged. He dreads that his family’s efforts and investment is going to go waste.

“My family invested every penny of our hard earned money in planting paddy in three bighas of land. We were hoping that the return from it would help the family fulfill our basic needs. But it seems that the rain has totally destroyed the paddy,” he lamented pointing his finger towards the field.

Farmers claim that the dam in Mahalisagar of Taulihawa has victimized them. They state that the Mahalisagar  dam constructed by India two decades ago is the main reason why their paddy fields are inundated. In the past years, only a few doors of the dam were closed during the monsoon, but this year the authorities concerned closed all the 15 doors of the dam in April, Dhuniya said.

He shared that the news had spread like wild fire in the area during the time and all the farmers and residents had expressed concerns about it to local authorities. With the incessant rainfall in the past few weeks, their worst fear came true. Huge swaths of land in the area are now submerged as the dam continues to block the river’s passage.

It is not just Dhuniya who is saddened by the one sided benefits of the dam. Farmers in his village, most of who are quite poor, lamented of the loss they had to bear due to the dam. Worse still, they are not sure until when the problem will continue.

“We are going to be affected by this dam every year, unless our government stands up for our welfare. If this continues we will have to beg for survival, How can a farmer grow paddy when all your land is submerged,” said Dhan Raj Yadav, Dhuniya’s neighbor. “All our farms submerged. We are very worried for the future of our family,” he added.

Yadav’s 10 katha of land is also submerged. Just like his neighbor, his farm had submerged soon after he planted paddy on it. “Since my farm submerged, we have not been able to sleep out of worries for the family’s future. What will we eat, if the paddy rots due to excess water?”

Both of these neighbors have invested all their savings in this crop. Dhuniya said that spent Rs 20,000 in planting the paddy with the expectations of getting even better returns from it. “But now, I am sure I have lost all of my investment. The dam has snatched our family’s happiness,” he added. 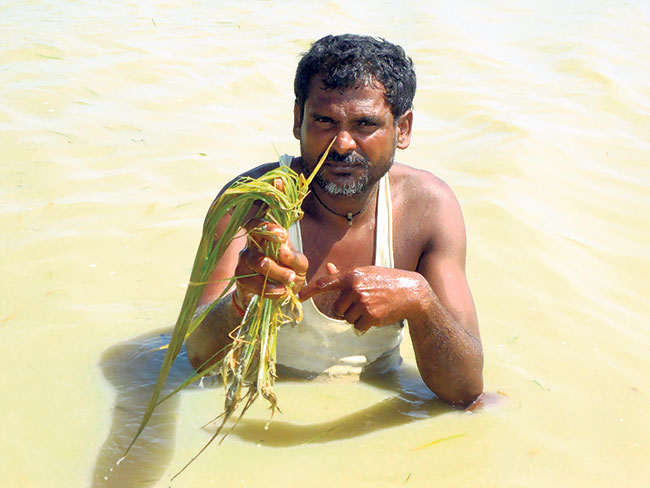 Dhanedhar Dhobi also lamented at the fate of farmers, whose months of hard work is washed away by heavy rains and floods. “Disasters ruin our entire world in a second.  We toil day and night for months to a make a living but man-made and sometimes natural disasters snatch everything from us. What shall we do? he wondered.

Apart from Bhagwanpur, farms in Bhaisahiya, Lahrauli and Mudila have also submerged by river as the Mahalisagar dam’s doors remain closed, Dhobi claims. He lamented that their fields have turned to ponds, incapable of producing anything.

“Since the dam was constructed some years back, we have not been able to do farming properly,” noted Dhobi.

Since its construction nearly two decades ago, the Indian government has repaired, and modified it from time to time. Such moves have further affected Nepali settlements and farmers. They say that have always been disadvantaged.

“India opens and closes the doors of the dam to suit their needs. They don’t consider how their moves affects us. We don’t get water in dry season and we are flooded in the rainy season,” says a farmer Mahommad Umer. “In monsoon, they close the doors. In winter, they open all the doors. This has affected Nepali farmers,” he added.

Dhana Raj Yadav, another farmer in the village, stated that the government should hold talks with the Indian government and find a solution that is beneficial for both countries.  Or else, he said, villages in Nepal would be flooded every year.

Chairperson of Yashodhara Rural Municipality, Girijesh Kumar Panday, said that they are trying to address concerns of the farmers. “Farmers who have been affected, will be provided with some kind of relief. To find a long term solution for the problem, we will discuss the problem with the central and the provincial government,” he said.

“Paddy and wheat crops of our farmers are being destroyed every year because of the dam. We have to take this matter seriously,” he added.

RAJBIRAJ, July 6: A joint security squad has begun the reconstruction of a dam on the Mahuli River based in... Read More...