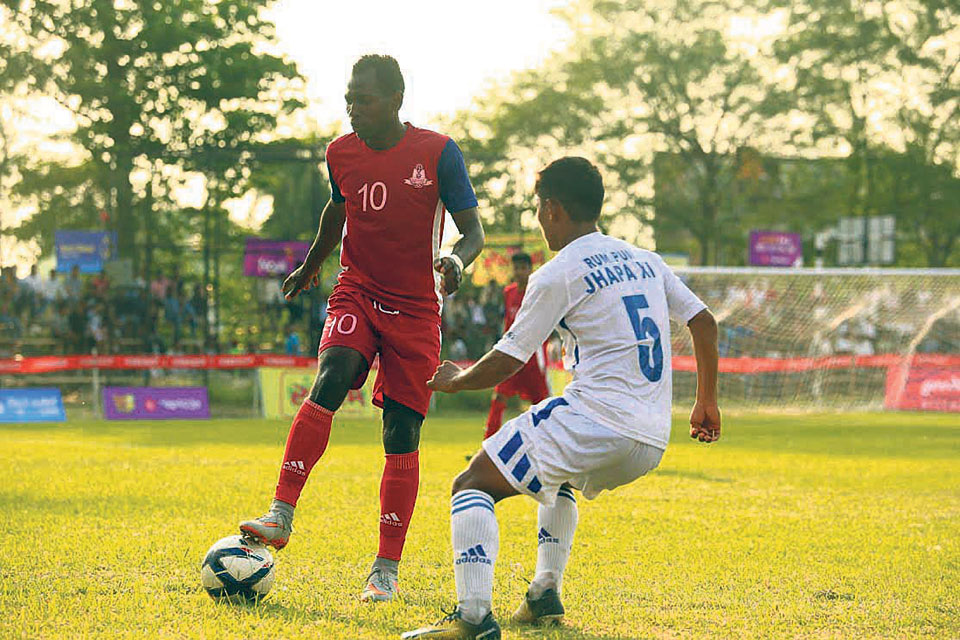 Players of Madan Bhandari Sports Academy (left) and Jhapa XI in action during a first round match of the Damak Gold Cup football tournament in Damak on Wednesday.

DAMAK, May 3: Madan Bhandari Sports Academy has advanced into the second round of the ongoing first Damak Gold Cup football tournament defeating Jhapa XI 4-0 in the curtain raiser on Wednesday.

Jhapa, who played very poorly from the start, could not improve its game in the second half as well and suffered a terrible loss. Foreign player Ilon bagged a brace, while Prakash Budhathoki and the other foreign player Abba scored a goal each.

Ilon gave Madan Bhandari a lead in the 12th minute after Jhapa’s Dilen Loktam failed to clear the ball after he tried to head the ball, while Budhathoki doubled the lead in the 24th minute utilizing a pass from Saujan Rai. Madan Bhandari made the score 3-0 inside the first half as Ilon bagged his brace scoring in the 38th minute by a header. Abba took the game beyond all doubt as he scored in the 58th minute in a one vs one.

Jhapa got a series of good chances to score, but squandered them and failed to even pull a goal back. Captain Karna Limbu failed to convert a spot kick as the ball hit the bar, while Jhapa got another chance as the players’ lack of good combination in the last third could not result in the goal in the 30th minute. Likewise, Chhiring Gurung’s cross to Limbu was not even touched near the post.
Madan Bhandari’s other notable chance fell to Ilon as his double shot was saved by Jhapa goalkeeper Kishor Giri.

Madan Bhandari’s Rai was named the man-of-the-match and was rewarded with Rs 11,000.
The second match will see Damank Municipality team take on Rupadehi XI on Thursday.

The winner of the tournament will take home Rs 1.311 million, while the runner-up will be rewarded with Rs 611,000, the organizers informed.