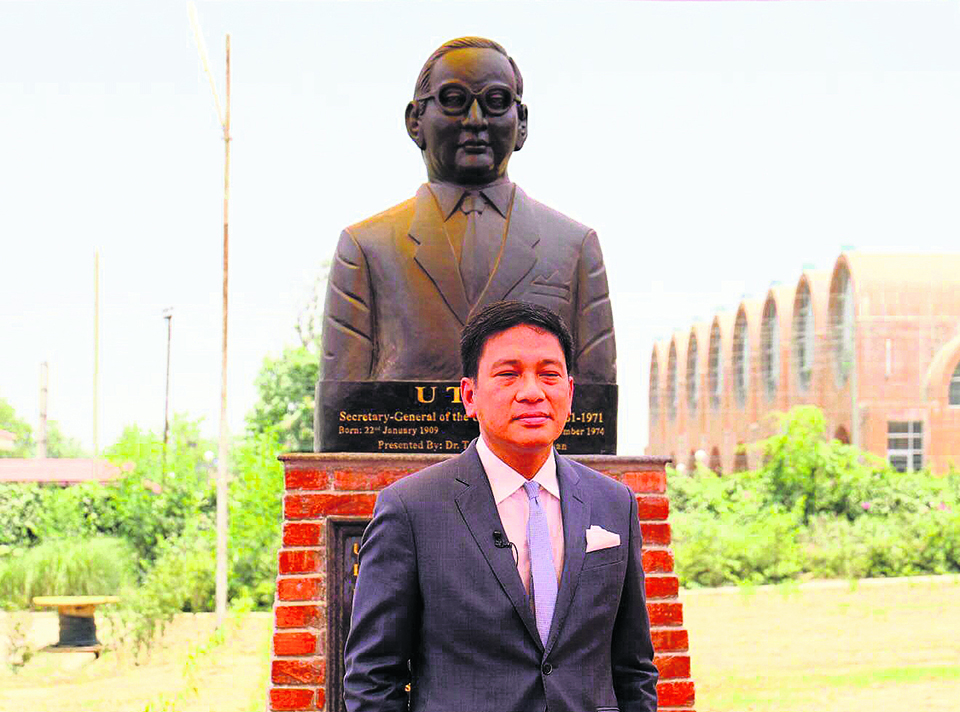 LUMBINI, May 18: It has been over five decades since then secretary general of the United Nations, U Thant, visited Lumbini and set in motion the UN’s initiatives for the development of Gautam Buddha’s birthplace.

His leading role in involving the UN, along with Japanese architect Kenzo Tange’s master plan for Lumbini in the 1970s, are considered important milestones in developing Lumbini as a pilgrimage and tourism destination.

However, Lumbini is still far from becoming what U Thant had dreamt for the Buddha’s birthplace —a symbol and catalyst for global peace, environmental protection and development.
His grandson, Thant Myint-U, recalled the aspiration and vision of his grandfather during the unveiling ceremony of U Thant’s statue at Lumbini on Friday, on the eve of Buddha Jayanti.

“I found so many things have been done in recent years in Lumbini. But, I am very hopeful that much more will be done in years to come not only to make Lumbini a great Buddhist pilgrimage site and center for international tourists, but also beyond that to link it with the vision that U Thant had,” Myint-U told Republica, recalling his grandfather’s trip to Lumbini in 1967 when he was UN secretary general.

UN Secretary-General Thant had come to Lumbini at a time when global peace was marred by the wars in Vietnam and Cambodia along with geopolitical tensions between the United States and the Soviet Union.

“U Thant was trying to deal with all these issues and find a way out of a very difficult situation that the world found itself in during the late 1960s,” said Myint-U. “The idea that U Thant had of Lumbini was its becoming not only an international pilgrimage site, but also a place that could be useful for people to meet, talk and discuss at a time when we have so many problems in the world,” he added.

U Thant declared that his visit to Lumbini was “one of the most important days of my life.”
Many remember him as a legendary figure whose support was instrumental in mobilizing international support for Lumbini development.

In recognition to his contribution and initiative in internationalizing the Buddha’s birthplace, the Lumbini Development Trust and Lumbini Hotel Kasai have installed his statue at Lumbini.

Venerable Metteyya Sakyaputta, vice-chairman of the Lumbini Development Trust, said that the statue will be a tribute to U Thant’s contribution in the development of Lumbini. He also said that the Trust is mulling a plan to develop a Lumbini International Peace Center with an aim of making it a center for dialogue for peace in the world, in line with U Thant’s vision.

But realizing that vision is still far away as Nepal is still struggling to fully implement Tange’s master plan that was approved in 1978.

“We should not be pessimistic. There has been a lot of progress in the last 40 years despite instability grappling the country for a long time. We are working in full swing to complete the implementation of the master plan within the next two years,” added Sakyaputta of the Trust, the agency that was formed to implement the master plan.

Women's rights only on paper, law-enforcement limited to cities
7 minutes ago

Seven arrested for trying to rob tourist
29 minutes ago