It’s not secret that Nepalis love to eat out. The burgeoning of restaurants and bars stand testimony to that fact. But what’s also true is that, at the end of day, we all want home cooked dal-bhat. And if you live away from home or go abroad for a trip, you know that feeling when your entire being craves the familiar taste of local spices and textures. 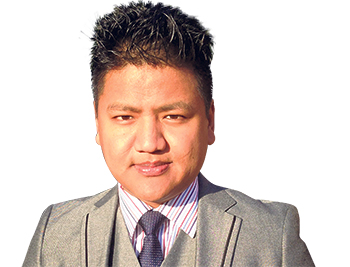 Chef Santosh Gurung, who is based in the UK, is a fanatic when it comes to Nepali flavors. His YouTube channel, Home Food Buzz, which has over 30k followers, is a haven for those wanting to delve into Nepal’s culinary culture. Gurung started the channel so that young Nepalis, who are living abroad and don’t know how to cook, have somewhere to turn to for their cravings.

Gurung was born and raised in Syangja. His culinary journey started when he moved to Australia in 2009 in order to study commercial cookery. “When I joined the course, the only thing I could make was tea,” he says adding that to improve his cooking skills he started watching cooking shows, noting down the details and studying whenever possible.

Moreover, as most people in his circle were also studying commercial cookery, there was an environment that encouraged talking about food as well as sharing one another’s experiences with food that helped Gurung when he wasn’t feeling too good about his cooking skills.

“Most of us were in our early 20s and there was no lack of energy and enthusiasm. All of us wanted to become the best of chefs,” he recalls explaining that it was around this time when he became interested in watching cooking shows by celebrity chefs like Gordon Ramsay, Heston Blumenthal, Jamie Oliver, and Rene Redzepi to name a few.

It was in September 2017 that Gurung opened his YouTube channel with the intention of sharing some easy recipes. The first few of his videos didn’t get as many views as he expected. However, when he uploaded a video on making mutton curry, there was a sudden surge in the number of views. “As I had posted the video during Dashain season, people wanted to perfect their curries at home and turned to my channel,” he recalls.

When he first started making YouTube videos, he had a job and worked seven days a week. Thus he could only make videos when he was done with work or on days when he was off-duty. “I had to work on a shorter time frame to plan and shoot the video. It was disheartening at times,” he recalls. Nowadays, he is free on the weekends and that’s when he creates the kind of content he wants. Gurung’s videos are usually filmed outdoors as he loves natural light. However, due to UK’s unpredictable weather, shooting can be a daunting task.

As his channel grew, he became friends with a lot of food bloggers in Nepal who gave him feedback and suggestions as well as taught him a thing or two about food photography. And that has also helped him make better videos, he says.

For Gurung, cooking is an absolute stress reliever, especially after a long day at work. “The best part of a home cooked evening meal is that you can share it with your family,” he says adding that even after all these years of living in the UK and Australia, he still craves for that Nepali taste.

“Those local dishes like Mula ko achar or sukuti are not available in Nepali restaurants in the UK. That’s what I miss the most,” he reveals. So, he confesses, he decided to make these dishes himself. This, he stresses, has brought him immense pleasure and happiness and, at times, he evens feels like he is back in his hometown, eating dinner with his parents.

Furthermore, he reveals that sometimes it can be very difficult to find some ingredients as well as utensils to cook. “For my ghee and mohi video, I brought the theki from Nepal but couldn’t buy the madani. And so I had to improvise with a Mexican hot chocolate mixer,” he says adding that he often has to make-do with what he has. That’s just how it is, he says.

Gurung wants his channel to be a place where young Nepalis who have just moved abroad can turn to when they are feeling homesick and craving familiar food. “I know what it’s like to be a young kid with very little knowledge of cooking, and that too in a foreign land,” he says. Moreover, he also wants to document Nepal’s cuisine in order to share it with his children in the future as well as recall old memories later on.

Out of all the food he has made for his channel, homemade ghee and mohi, radish pickle, pork curry with greens, mutton curry, mutton sekuwa, buff sukuti and lemon pickle are his favorites. He wants to try making fermented radish pickle, paneer curry, pani puri and fried fish in the coming days. “I also can’t wait to come back to Nepal and taste amazing Nepali food. The first two things I will try are Newari food and jhol momo,” he concludes.

20-year-old Sushita Gurung has promised to treat her friends to a nice meal at Hankook Sarang after she gets paid... Read More...

Experimental with an essence of Nepal

With the idea of promoting the essence of Nepali food, Nisha Sen Thakuri along with her partner opened up Lapsi... Read More...

KATHMANDU, August 28: Government-operated fair price market has decided to provide discount of Rs 10 on a kilogram of ghee or... Read More...