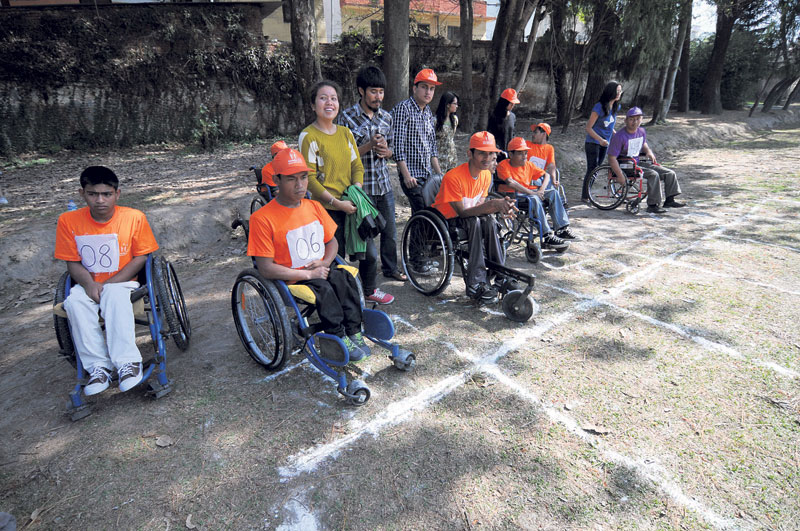 “It is very easy to doubt your ability once you have become handicapped. You and the people around you fear that you can’t do many things. I don’t want to live by such low standards.”

It’s going to be a significant two months for Bikram Bahadur Rana and Laxmi Kunwar. Rana, who is still affiliated with the army, had lost his eye sight 13 years ago during combat. Kunwar, on the other hand, is bound to a wheel chair after a childhood spinal cord injury rendered her legs useless. So far they have only had a couple of brief meetings with each other but come September 7, together they are set to represent Nepal at Rio 2016 Paralympics. Naturally, the mood is one of anticipation and determination. They are the only two differently abled Nepali athletes, who have been able to secure a spot to compete in the prestigious competition this year but despite the feat and the responsibilities that come with it, it seems they stand alone in their own corner.

Generally, athletes representing their nation in international arenas are supported by the state. Even Nepal’s Olympic Committee arranges coaches, training ground facilities, nutrition and diet expenses as well as daily miscellaneous wages for our national sports men and women. Their training is in full swing for the 2016 Rio Olympics which is scheduled a month prior to the Paralympics. However, regardless of the fact that Rana and Kunwar too will be playing at the same venue, against the same number of countries and for the same level of sporting prestige, they haven’t been offered any of these facilities.

“That’s the fate of differently-abled athletes here in our country,” says Rana. This is the 36 year old track runner’s second Paralympics. Back in 2012, at the London Paralympics, he actually ran the fastest among the South Asian runners, completing the 100m in 12.81 seconds. This time around, he is looking forward to beat that record. But once again, he has to do so without a coach or special training facilities.

“I don’t have other options so I just turn to the Internet for guidance. To a large extent, it helps that I have acquired a lot of experience in track running but for further specialized tips on techniques, I simply search for coaching videos for Paralympians. It’s how I have been improving my races,” shares Rana.

Apparently, Kunwar’s training sessions begin in similar fashion as well. It may have only been five years that the 26-year-old began swimming but she has earned several accolades for it.  What’s more, those feats too were achieved on her own. Kunwar found her competitive streak trying to swim faster than the other people in her club for spinal cord patients. Once she began competing, she also began going through YouTube instruction videos. Even these days, during break hour at a NGO that she works for, Kunwar apparently makes notes of helpful tips.

“It is a lonely quest for us differently-abled athletes. We are completely left to our own devices. For example, in my case, the fee charge at the swimming pool I practice is Rs 200. I have been bearing this on my own. They eventually gave me some discount since

I’m an international player and use their facilities on a daily basis. But regardless this still amounts to a lot of expense for me and we haven’t even begun on diet, gear, transportation and others,” says Kunwar.

Kunwar certainly isn’t the only one having to pay for her sporting dreams. All differently-abled players, regardless of their level, have to shoulder the burden of arranging the logistics and the finances. Even Rana who perhaps has the most international games experience among them has many of these stories. Apparently, he even had to chip in an extra Rs 20,000 in 2014 to participate in the Asian Games. The Paralympics committee had told him that they didn’t have enough money to fund his travel cost.

“What can you do in these instances but pay up. In many ways, this is a mere reflection of the state’s continued incompetence to look after the disabled population. They have never fully provided us with all the facilities and the case isn’t any different when it comes to sports either. The Paralympics committee is as good as absent,” explains Rana.

Nevertheless he continues to persevere for the 2016 Rio Paralympics. He reveals that a big reason behind his decision to compete is his wish to prove himself. Rana continues, “It is very easy to doubt your ability once you have become handicapped. You and the people around you fear that you can’t do many things. I don’t want to live by such low standards. I don’t want people around me to lower their expectations of me either. ”

Kunwar too claims that people’s attitude towards her changed by leaps and bounds ever since she has begun competing. She remembers the first time she came to her neighborhood. At the time, she had difficulty convincing her landlord that she could pay her rent but these days, they want to hear about her matches, her victories and her travel plans. In many ways, she feels immense pride in representing the differently-abled community in such a positive light.

“As a handicapped individual, I can’t stress enough on the importance of having an active lifestyle. When I first learned that I would have to spend my life in a wheel chair, I was depressed too. But then with counseling, I decided not to give up. It’s doesn’t have to be sports alone. It could be music, arts, politics, academics, it’s important to pursue your interests so that’s why I do this,” says Kunwar.

Both she and Rana are counting down the days to the two months. Since they are largely left to their own devices, they have a lot of ground to cover. Kunwar is trying to confirm the dress code for this year’s competition. Last time in Korea, there was quite a debacle when she almost couldn’t compete because her swimsuit wasn’t manufactured by the organizer’s official partner. She wants to avoid such scenarios at all cost this time around.
Similarly, Rana is trying to find a guide for his races. During the track event, blind racers have another runner with them who act as their guide. Rana has been practicing with a younger player from the army but because of his duties, Rana isn’t sure that he will be able to accompany him to Rio. Further, since he also wants to break the record, he would very much like a partner who is faster.

With the clock ticking, these arrangements are proving to be all the more urgent. But then again, these predicaments aren’t exactly new to these Paralympics athletes. In fact, there are almost expected.

“Paralympics is also about bringing glory to our nation. We too are going to walk with our national flag and we too shall be representing our country. I doubt we will win but both of us are determined to perform well. If we come in the top ten or seven, perhaps then, it will shake the state’s conscience. We will have done well without their help. Perhaps then they will give differently-abled sports the priority it deserves,” says Kunwar.