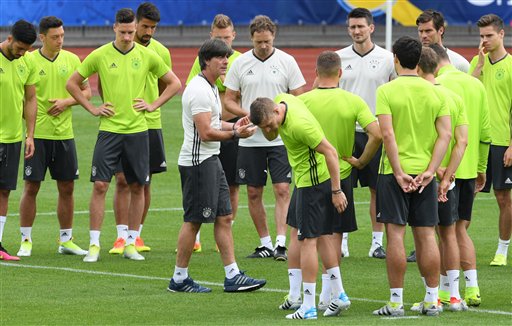 LILLE, June 26: Germany coach Joachim Loew is confident his side will be "better than England" when it plays Slovakia on Sunday in the last 16 at the European Championship.

Slovakia held England to a goalless draw to reach the knockout stage as one of four third-place sides behind Wales and England in Group B. The draw earned praise from Loew, whose own side was beaten 3-1 by Slovakia in a storm-interrupted friendly in Augsburg, Germany on May 29.

Loew described Slovakia on Saturday as "one of the surprises of the opening round."

"But they already played a great game against us in Augsburg. They were very vigorous, very courageous and very good technically," Loew said. "They beat Russia, were a bit unlucky against Wales and lost, and played a scoreless draw against a strong England side. They have some experienced players in defense. I think we'll find ways and means, so we'll do better than England."

Loew said Slovakia was as good a counterattacking side as Poland, which held Germany to a scoreless draw in the group stage.

"Their whole game is based on a strong defense," Loew said. "They control the space well, are very strong in challenges and they can break with three or four quick players," Loew said. "Of course nearly everything goes through the middle, through (Napoli star Marek) Hamsik, who also has a good shot at goal."

Germany didn't concede a goal in the group stage for the first time since 1996, coincidentally when it won the last of its three titles, but it has injury worries over central defender Jerome Boateng.

Boateng, who was forced off early with a calf injury in the 1-0 win over Northern Ireland on Tuesday, trained on Saturday morning before departing for Lille. Loew was cautiously optimistic that he'll be able to play.

However, Sunday's game is coming too early for Bastian Schweinsteiger to return to the world champions' starting lineup.

"He's been out injured for ages. January was the last time he played from the start so from that point of view it was clear that he wouldn't be ready for 90 minutes at the start of the tournament," Loew said of the Manchester United midfielder.

Slovakia has injury worries over Dusan Svento, Tomas Hubocan and Robert Mak, while defender Peter Pekarik will play with a nose guard after receiving a heavy blow during the game against England.

"Our injuries are not so bad, but we haven't a lot of time to recover," Slovakia coach Jan Kozak said.

Nothing less than Euro 2016 victory will do for Germany

EVIAN-LES-BAINS, France, June 10: Nothing less than winning will do. Germany's quest for a record fourth European title, only... Read More...