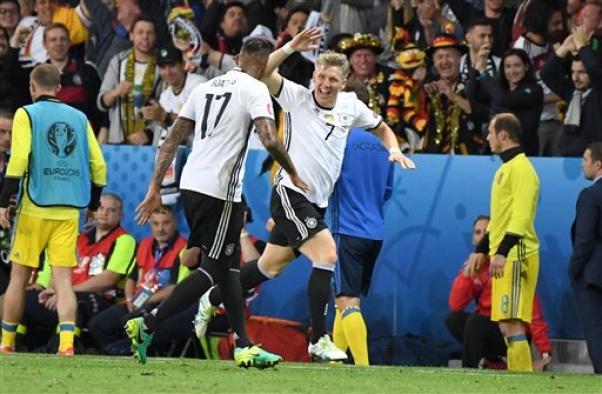 PARIS, June 13: Germany began its campaign to add the 2016 European Championship to its 2014 World Cup with a promising 2-0 victory over Ukraine on Sunday, while England and Russia were threatened with expulsion from the tournament.

Shkodran Mustafi's header set Germany on its way to a win that was sealed by substitute Bastian Schweinsteiger in the second minute of injury time, just two minutes after the midfielder had come on to the pitch.

Germany surged forward on the break and Mesut Ozil provided the perfect cross from the left flank for his teammate to hammer into the net.

"A Bastian Schweinsteiger is worth his weight in gold," Germany coach Joachim Loew said.

Schweinsteiger, who suffered his second serious knee injury of the year in training on March 22 and hadn't played since, could barely believe the way his luck had turned.

"Incredible that something like this can happen, you can only wish for it," he said.

And tonight, Spain, which is bidding for a third consecutive European crown, takes on the Czech Republic in their opening match, while the action ends with a promising Belgium side facing Italy.

OMSK, Russia, Aug 22: A plane carrying a Russian dissident who is in a coma after a suspected poisoning left... Read More...

NGO operators in Kathmandu deny embezzlement of UK donation meant for treatment of street dogs, claim that they are not local board of KAT UK
12 hours ago

16 DIGs including all provincial police chiefs transferred
1 hour ago