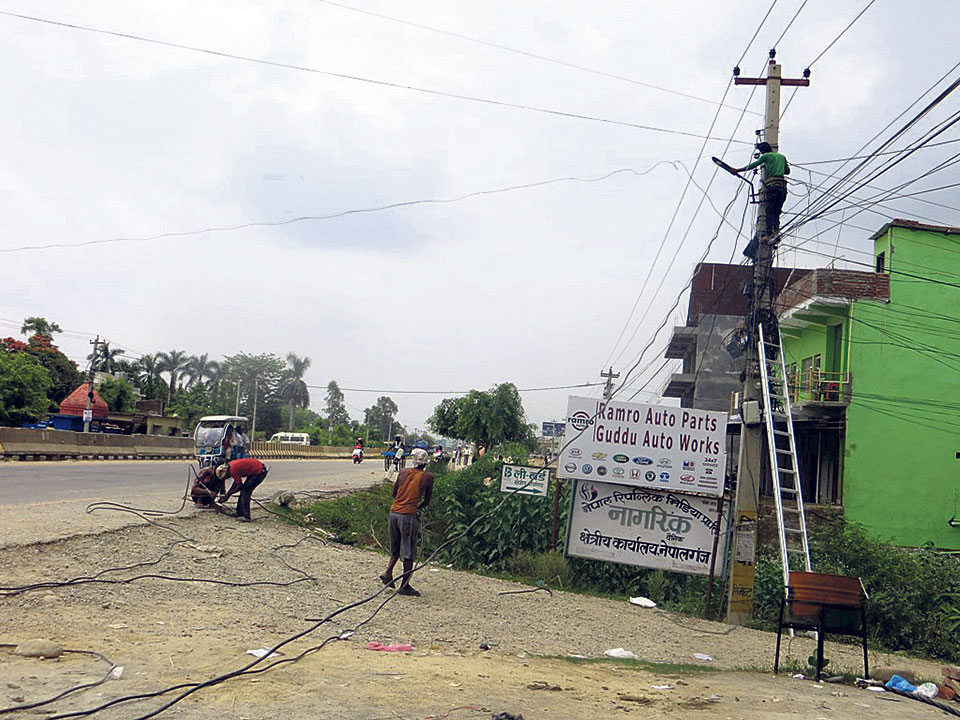 NEPALGUNJ, July 8: Two people were killed and three others were injured in Fattepur of Banke district last Saturday after being electrocuted. The incident happened after power line transmitting high voltage snapped and touched another power line transmitting low voltage power to residences. Because of the high voltage, electricity meter and equipments in many households were burned along with claiming lives of three pigs, a cow and a buffalo in the same locality.

The incident happened as the Nepal Electricity Authority (NEA) was using the same pole for transmitting high voltage and low voltage power lines. Power line on the upper section of the pole was being used to transmitting 11,000 volt and section below it was being used for transmitting 400-volt power to residences.  Following the incident, consumers have raised concerns about the safety measures NEA takes to ensure safety of its consumers.

“This is the height of negligence. How can they use the same pole for high and low power lines. They must have realized that power lines can snap and in such cases high voltage could reach consumers residence and claim many lives,” Sadip Subba a local resident said. “There could have been greater loss of lives and property on Saturday. If NEA cannot think and take precautions to avert such accidents, how can a layman understand it?”

Narrating the turn of events on the day, Subba said that people panicked and were fearing their lives in utter darkness. There was chaos all around and that they had to struggle to find the injured and taking them to hospital.

“We were sleeping and all of a sudden people were shouting and crying. Our electricity meter was burned and there was no electricity in the house. All of sudden there was chaos and fear all around us. How vulnerable are we?” Subba remarked.

Another similar incident happened this Friday in Nepalgunj sub-metropolis - 18 at around seven pm. A power line carrying high voltage supply snapped and fell on the ground. Though it did not take life or injured anyone, it triggered fear among the people. Locals claimed that passerby would have been easy victim of the power line, had they been passing under the line, at the time.

“It was a coincidence that no one was walking on the road when the power line snapped. You can easily understand, how much lethal it would have been, if it would have been otherwise,” said Bharat Keshar Khanal, a local resident. “This kind of negligence is rampant,” he added.

Khanal stated that many power lines are tied very low on the poles and at places, power liens hang so low that they can electrocute any passerby.

“Whether in the market area, in streets or in residential areas, no matter where you go, you will see that electricity poles and power lines are haphazardly managed. They are overtly risky, still NEA has been neglecting them,” he stated.

On Friday, when the incident took place, Khanal was just around the pole. As he saw the wire falling on the ground, he stood still for some time.

“The wire had caught fire first, before falling down. When it touched ground, I felt nervous and just watched silently,” he narrated. “After some time, the nearby transformer blasted, it looked like a huge accident though no one was harmed,” he added.

In the past, there were only a few houses in the town. However, over the recent years, population density has increased rapidly. New buildings have occupied all the open spaces of the area. “This has become a densely populate city that it not managed at all,” Khanal remarks.

In the past, there were fewer houses and buildings in the area. Over the years, the area is now home to many new buildings and structures. Despite the visible growth of the new buildings, Khanal says that there has been no corresponding growth or improvements in the infrastructures used for supplying power to the area. “If you look at the electricity poles and power lines, you will find that NEA has not upgraded them for years. It is using old and fragile pole and power lines to supply increased power need of the area.” “NEA has not upgraded its infrastructure based on the density of human settlement area. As such, there is no need to wonder how such accidents happen in this area. If the NEA does not correct itself and take preventive measures, such accidents will occur again,” Khanal lamented.

Another local Jagadish Dangi complained of the apathy shown by the officials of the authority. On Friday, the authority was immediately reported of the incident, but ‘there was no due response’.

“We all got very nervous seeing the burnt wires lying on the ground. We took no time in informing the authority. However, they turned deaf ear to us,” said Dangi. “They reached the spot after many hours but returned to the spot only on Saturday noon to repair the wire and restore the power supply,” he added.

Ram Dulare Yadav, chief of Power Distribution Center in Nepalgunj stated that such ‘technical glitches’ happen sometimes due to lack of the repairing of transformer or cables.

Once hailed by Nehru for its beauty, ‘India’s Switzerland’ lacks access to power, water, healthcare

In days when even a 12-year-old in an Indian city would be carrying a smartphone and riding to school on... Read More...