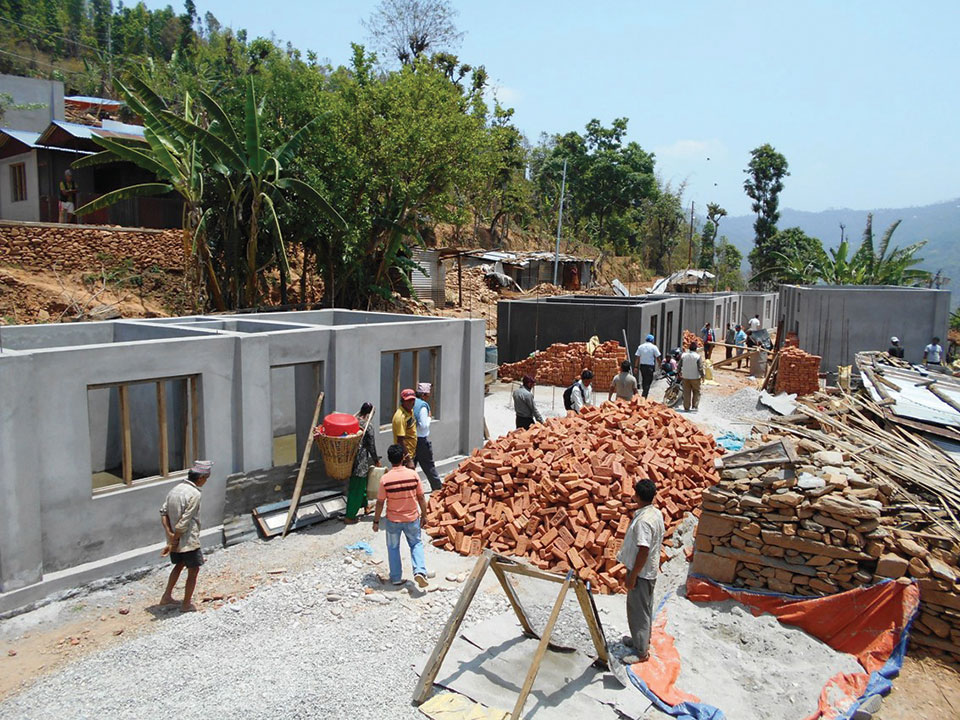 An integrated settlement under construction at Chautra of Sindhupalchowk in this recent picture. Photo: Dhruba Dangal/Republica

SINDHUPALCHOWK, May 13: Rising from the rubble has not been easy for the earthquake victims of Sindhupalchowk. Three years after the disaster, many are now making serious efforts for integrated settlements.

Locals of Chautara have shown no less zeal for this. Having lived in makeshift huts since April, 2015 when the earthquake rendered them homeless, the victims are now gearing up for community living by constructing new houses of the same type and size all at the same location. As the government has also been promoting integrated settlements, they are further encouraged.

“We are going to give it the final touch within the month of Asadh. People are excited. We could have started it much earlier,” said Tok Bahadur Shrestha, vice-president of the Local Reconstruction Committee. “Construction work is going on at a very fast pace,” he added.

The locals have established a community fund for this project which kicked off eight months ago. The grant provided by the government, support by other organizations and their own labor contribution have made things possible. According to Shrestha, 47 houses are being constructed in the new settlement.

“Rs 50,000 was received by each victim as the first installment of the reconstruction grant with which they established the fund. Now, there’s a joint account or community fund. The reconstruction authority has extended technical support and the beneficiaries have contributed labor,” Shrestha said.

According to Shrestha, 28 houses are now near completion while others are fast being constructed. Even though some families are bigger in size while others have fewer members, they are going to get to live in the same type of houses, he said. “But there are lots of benefits of community living and the victims are aware of it,” he stated.

The project was started when there was Rs 1.8 million in the fund. Now, Rs 7.5 million has already been invested in the project, according to Shrestha.

“First Rs 1.8 million was collected. Later, they got the second installment too. And so far, Rs 15 million has already been invested. “Apart from the grant amount, the quake victim families have contributed equally,” he added.

Meanwhile, Ram Prasad Gautam, chairperson of ward number 13 of Chautara – Sangachowkgadhi Municipality where the reconstruction is going on stated that the dream of the victims has come true. He claimed that the ward office had worked hard to build an integrated settlement. “JICA has also helped, apart from the government,” he said.

“When  you are from the same caste or community, it makes even easier for people to adjust. Such kind of integrated living is actually not a new thing in several parts of the country,” Gautam said. “But here, houses were little bit scattered earlier. People did not know integrated living can provide better facilities. Economically also, when things are brought or constructed in bulk, it’s far cheaper,” he added.

He further informed that the victims did not buy new land to construct house.  Many are building homes on their existing land, while those who did not had land there adjusted it with community members who.

“They did not have concerns for land to build house. Though their houses were destroyed by the earthquake, lands were safe. For integrated settlement, the community has planned in the similar way. While many have chosen to make home their own land, some have adjusted for proper shape and size,” he narrated.

Now, the new settlement will offer all  basic facilities to each household. Drinking water, toilet, power, road, open space, children’s park among other facilities Gautam said. “Not everyone had all of those facilities earlier. There was always problem of water, and similarly toilet was not so common. But all the families are going to have access to these basic facilities now,” he stated.

The beauty of community living also lies in the willingness to help each other. According to the locals, they feel far safer and stronger with the new settlement coming true before their eyes.

“They are working hand in hand to make it happen. We have divided the locals who have share in the settlement, work in two shifts. And their zeal or harmony is so apparent. They are learning the value of unity,” Gautam noted. He added that the ward is even seeking fund and support from the government and non government organizations in order to help more quake victims have similar settlement.

SINDHUPALCHOWK, May 11: Rising from the rubble has not been easy for the earthquake victims of Sindhupalchowk. Three years after the... Read More...

SINDHUPALCHOWK, May 1: Earthquake victims in Sindhupalchowk have been increasingly attracted towards integrated settlement. The attraction is fueled by the... Read More...

MAHOTTATRI, Jan 21: Construction works of the model earthquake-resistant integrated settlement for a Musahar community in Mahottari district by the... Read More...