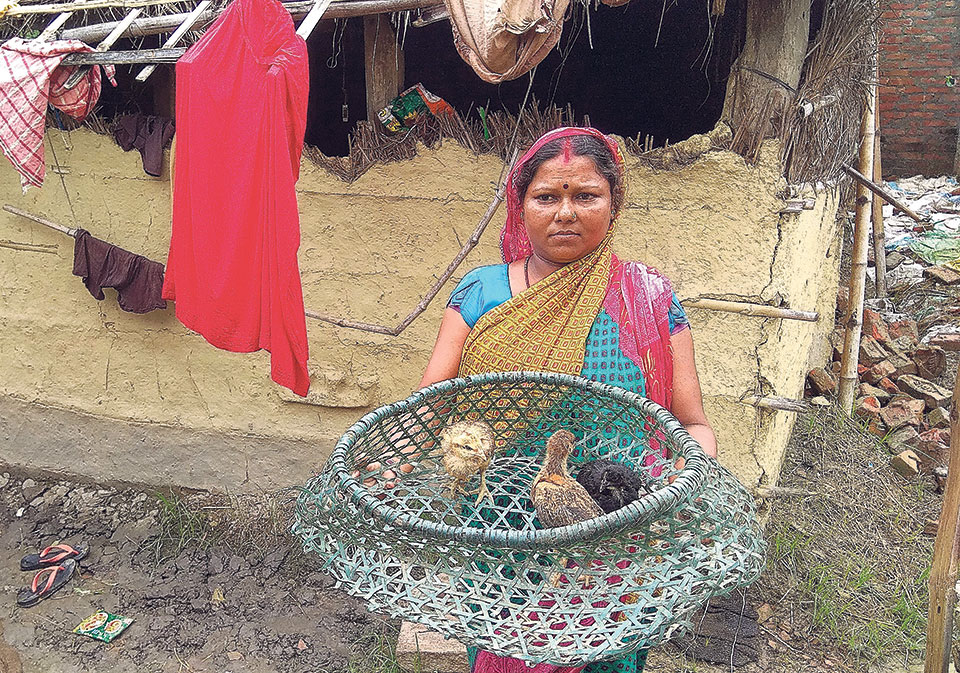 BIRGUNJ, Aug 2: Rabita Devi, 22, was busy with her household chores when a few officials from her rural municipality’s office approached her on Tuesday afternoon. They handed over three chicks and Rs 500 to her. A resident of Pakahamainpur Rural Municipality, she was surprised with the gifts. After explaining to her that the chicks and the cash were being provided as part of the government’s effort to reduce malnutrition, they took her signature on the receipt and walked away.

Devi is pregnant. She was getting the chicks and cash under multi regional nutrition program. But, she has no clue that this time she would be getting chicks. Earlier, she had seen pregnant women getting different things in package.

“When they came and gave me those three chicks, I was so surprised,” she said while showing the chicks in the backyard of the house. “They also gave Rs 500. I am pregnant for the first time, but earlier I had seen others getting something else,” she added.

Female Health Volunteers working in her village informed that on Tuesday nine pregnant women were provided with chicks and cash.

Ramesh Meheta, In-charge at the Pakahamainpur Health Post, however claimed that he was not aware of the program. “I am absolutely unknown about it. They are giving three chicks and Rs 500 to each pregnant woman I’ve heard,” he said.

Sources at the rural municipality claimed that earlier it was decided that eggs, seeds of fruits, vegetables and other nutritious items would be provided to pregnant women as part of the nutrition program.

Lalita Devi is also among the women to receive three chicks and Rs 500 and she is not happy. “They should have given us eggs, not chicks,” she said. “Now we are overloaded. How to t ake care of those chicks, we already have many other works to do,” she added.

She also signed the receipt after receiving the chicks and amount. But she noted that the amount was not mentioned in the receipt paper. “I think there is some fraud. But I could not say anything right away. I was confused,” she said.

Meanwhile, a local Hirdayanarayan Kusuhawa stated women’s signatures were taken forcefully on the receipt. “I had seen their receipt forms. I tried taking pictures of the form, but they did allow doing so. When I tried harder, they just rushed away,” he stated.

As per the records of local health posts, the program is expected to benefit 329 pregnant women in the rural municipality.

The rural municipality’s chairperson, Bijaya Kumar Chaurasiya stated that he is not aware about the ‘details’ of the program. “I have only heard that a nutrition program is operating in our rural municipality. But I have no idea what is being given to women,” he said. He added that chief administrative officer of the municipality Hiralal Bhusal looks after the projects like this one.

Bhusal however defended that the program is as per the decision of the municipality and Rs 20.2 million has been spent as part of the multi-regional nutrition program.

RAUTAHAT, Dec 6: A UNICEF-funded project in Rautahat district has come under scrutiny with some NGOs complaining of irregularities in the... Read More...

Avalanche in Manaslu mountain base camp, bad weather makes rescue difficult
4 hours ago
Sabitra's request to find her husband who disappeared in Italy five years ago
4 hours ago