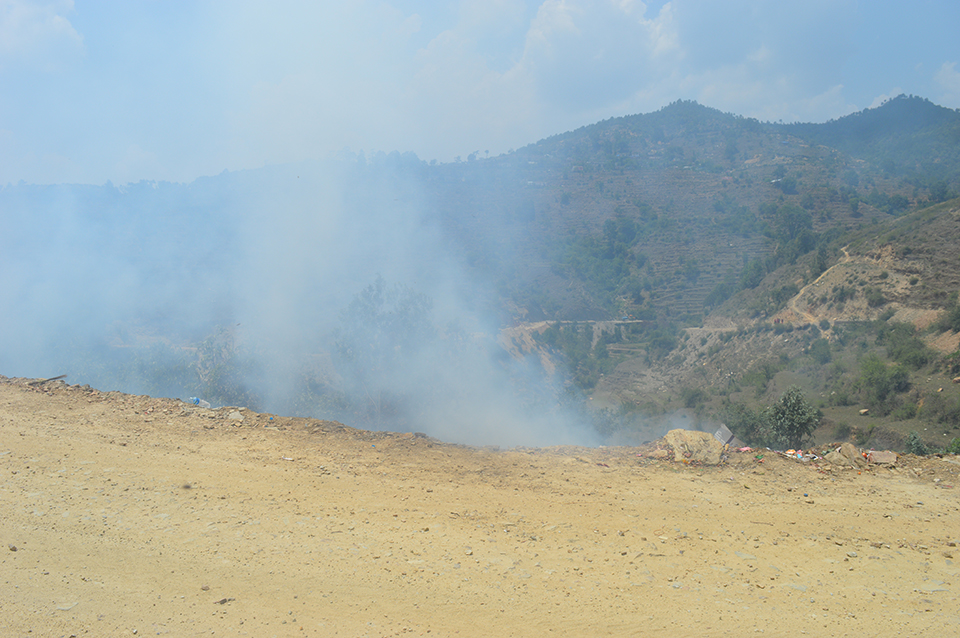 Pushkar Bhandari/Republica The smoke released from the burning of garbage in Kuyali of Amargadhi Municipality in Dadeldhura.

DADELDHURA, June 6: Locals of Amargadhi Municipality in Dadeldhura district on Wednesday staged a protest against the municipality for dumping waste in their locality.

The municipality has set up a dumping site in ward-7, Kuyali. Huge pile of garbage is dumped and burnt alongside the Ugratara-Melauli road section in Kuyali. The smoke released from the burning waste spreads to the nearby Pokhara Bazaar, Ugratara Secondary School and nearby settlements.

This has polluted the environment severely. By taking a private land on lease, the municipality started dumping the waste collected from the district headquarters and nearby market areas in it. This has not just compelled the locals to tolerate the bad odor but also polluted the nearby rivers.

Ram Bhandari, one of the locals, stated that the municipality must stop disposing waste in Kuyali.

"The disposed waste has contaminated the water of Guine Gad River and also made it challenging for us to breathe," said Bhandari. Despite urging the municipality to remove the dumping site from Kuyali, nothing has been done yet. This has forced the locals to take to the streets.

The water of Guine Gad River is used by the locals of dozen villages of Amargadhi, Ajayameru Rural Municipality and Bhageshwar Rural Municipality for feeding their cattle, washing clothes and also for taking bath. The rotting pile of garbage has also increased the risk of water-borne and respiratory diseases among the locals.

Biesheshwar Prasad Ojha, mayor of Amargadhi, informed Republica that the local unit is searching for a suitable land to shift the dumping site. According to him, the municipality had to dispose waste in Kuyali after the locals protested in the previous dumping site as well.

It has been years since the residents of Amargadhi are struggling in lack of proper dumping site.