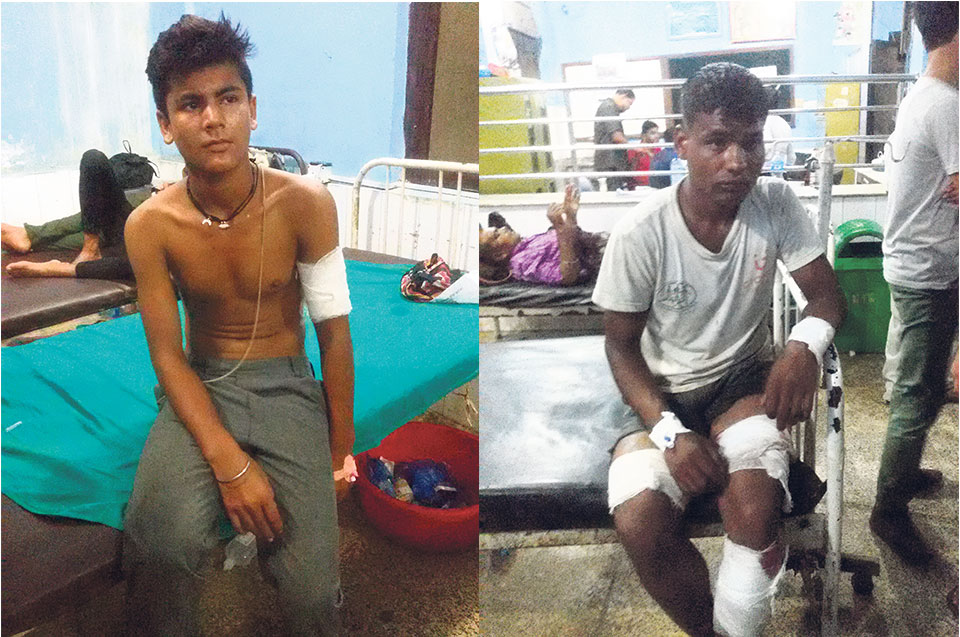 MAHENDRANAGAR, Aug 25: Accusing that police have been attempting to protect the person involved in the rape and murder of 13-year-old Nirmala Panta, the locals and Panta’s family members have demanded investigation against the police team led by Superintendent of Police (SP) Dilli Bista.

According to the family members, despite their repeated requests to start search for Nirmala after she went missing on July 26, the local police dillydallied over starting an investigation. Durga Devi Panta, the mother of the deceased who had reached the local police station at 8 pm on July 26 stayed there till 2 am and repeatedly asked the police to search the house of Nirmala’s friend Roshani, but the police ignored the request.

Later, police arrested a mentally-challenged person framing him as the culprit. This caused a huge controversy. Nirmala’s family members said they had approached both the District Police Office and the District Administration Office (DAO) asking them for help. “Had police acted immediately, our daughter could have been saved or the culprit could have been arrested,” said Durga Devi.

Yagya Raj Panta, father of the deceased, said the way the police handled the case was suspicious from the very start. “The investigation should have begun from the house [of Nirmala’s friend Roshani] from where she went missing. But the police didn’t go there,” said Yagya Raj.

On July 26, Nirmala Panta, 13, of Bhimdatta Panta Municipality-18 had gone to her friend Roshani’s house for study. However, she did not return till late evening, which caused panic among her family members. On the next day, Nirmala’s body was found dumped at a sugarcane field near Roshani’s house.

As their family was poor, Nirmala and her elder sister Manisha used to sell chatpate [a hot and sour food item] during holidays to support their family. As informed by Manisha, on July 25 Roshani had bought chatpate worth Rs 20 from Nirmala on credit and promised her to pay her the next day when Nirmala visits her place. Reportedly, Roshani and her elder sister lived alone in their home. “We are not accusing the two of killing our daughter but we suspect that they might have crucial information about the incident,” said the father.

The victim’s mother being prevented twice from entering Roshani’s house on the day she went missing, dillydallying by police in searching for the victim on the first day, and the police finding the body on the next day exactly at the place suggested by Roshani’s sister have made this case even more suspicious, according to Nirmala’s father.

Expressing his disappointment toward SP Bista’s statement that the rape was consensual, the father questioned, “If it was done with consent then why was she killed?” Police confiscated one of Nirmala’s slippers hanging by her cycle in the river. “We asked them to find another slipper they said that might have been swept away by the river. How did the police know that it was swept away by the river?” Yagya questioned.

He said a mentally-challenged person could never rape and kill his daughter and that the person was framed. And it’s just a ploy to protect the real perpetrator. “Instead of conducting proper investigation, the police have tried to hoodwink us with false evidences,” he said, adding, “That’s why we want investigation against the police.”

Meanwhile, local activist Bimala Bista also demanded investigation against the police. Joint Secretary Hari Prasad Mainali, the coordinator of the probe committee formed by the government has promised to begin the “investigation from scratch and dig out the truth of the matter.”

Mahendranagar tense after mentally-ill man ‘framed’ over rape and murder

MAHENDRANAGAR, Aug 23: With the locals continuing protest against the police for ‘framing’ a mentally ill person in the rape and... Read More...