Locals obstruct road after their village gets covered with dust 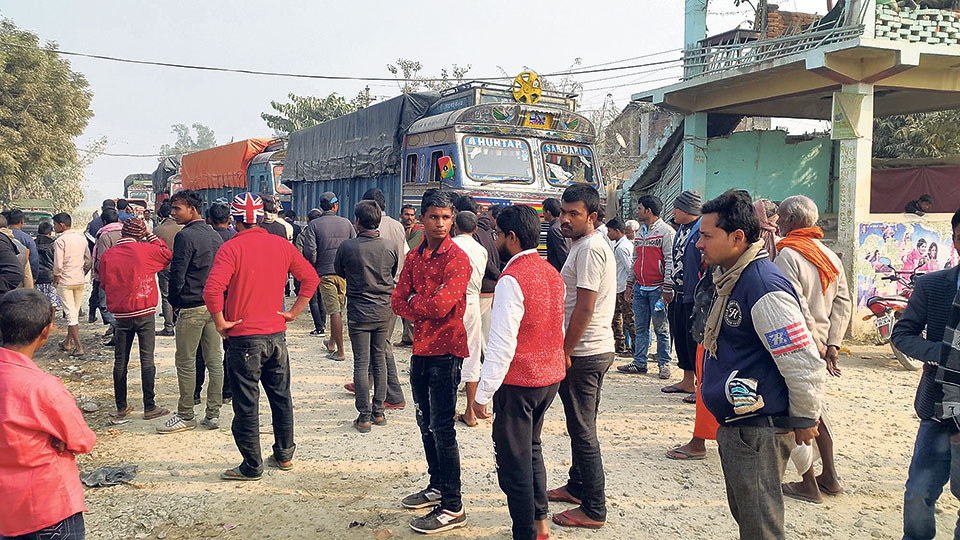 SARLAHI, Nov 25: Locals of Gairchowk in Sarlahi district obstructed the Nawalpur-Malangwa road section on Saturday demanding the authorities to blacktop the road as soon as possible. The locals took to the street to protest against the dust pollution caused by the poor condition of the major road.

The residents of Gairchowk in Kabilasi Municipality expressed their their frustration over the dusty air blown by heavy vehicles passing through the road section. According to a local, Ram Prasad Sah, they were left with no option other than to obstruct the road since they were facing problems in their daily life due to the dust pollution. They also demanded that the road should be blacktopped at the earliest.

The 25 kilometers long Nawalpur-Malangwa road section has been in a sorry state since a decade while it has been under construction for the last seven years. Some of the portions of the road section were blacktopped during Tihar while the construction works in other parts have not even started. The locals were angered after their village was covered with dust after the contractors stopped sprinkling water in the road section.

The construction of the road section has been divided into two parts and two different contractors have been given the responsibility to build the road from Nawalpur to Gair and Gair to Malangwa. The deadline for the construction expired in September but was extended till December. However,  there are no signs of completion of the blacktopping anytime soon.

Chief District Officer (CDO) of Sarlahi, Drona Pokharel, said that the District Administration Office has been requesting the contractors as well as Postal Highway Project to expedite the works on the Nawalpur-Malangwa road section.

KATHMANDU, June 11: Locals have been agitated after the road construction from Chabahil to Thali via Sankhu, started four years... Read More...

The road near my friend’s house has been dug up and left as it is for the last few months.... Read More...