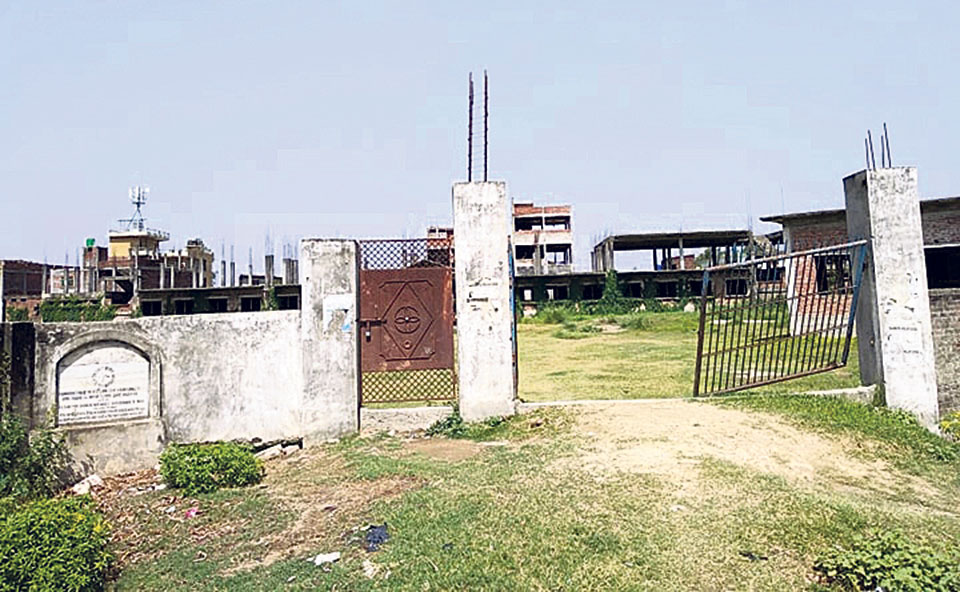 RAUTAHAT, May 10: Locals in Rautahat have pinned their hopes on Indian Prime Minister Narendra Modi to make efforts to complete the infrastructure projects funded by India that have remained stalled for years.

All the three India-funded construction projects in the district are yet to be completed even 13 years after the beginning of the construction works.

The structures of the hostel building which will have 51 rooms and was estimated to have a construction budget of Rs 29.5 million have started to fall apart. The Indian government has handed the project's tender to a joint venture of Gorkha, Sky and Cannon construction companies.

Former Prime Minister Madhav Kumar Nepal, the then chairman of the school management committee, Sambhu Shah and the chief district officer all have requested the Indian Embassy to resume the project. But, the construction company and the Indian side have been trading blames for the delay in the project. The Indian side has been claiming that the construction company is responsible for the timely completion of the project whereas the Nepali companies claim that due to inflation of the price of construction materials, the budget must be revised. Students of Secondary School, one of the oldest schools in Nepal, have been affected invariably by the stalling of the reconstruction project which was supposed to be completed within one and a half years. Due to the delay in completion of the hostel, students who come from far have been forced to rent rooms around Gaur.

After the stalling of the construction of one of the two buildings of Saraswati Secondary school for 10 years, locals have pinned their hopes on the Indian Prime Minister's Nepal visit for the resumption of the projects.

Another School, Pathara Budharam Secondary School was pledged an assistance of Rs 43.9 million from the Indian Government but the Indian side has failed to sanction the budget on time. The project was halted after Indian Embassy provided Rs 10 million in one installment while the remaining fund was stonewalled.

“Although the construction company has completed the construction of one story of the building worth Rs. 25 million, the failure of the Embassy to provide the needed fund to the company has hampered the project,” said the school's principal Rajendra Shah. “Various local representatives have been meeting delegates from the Indian Embassy frequently to request them to provide the necessary funding.”

“Most of the Indian-funded projects are related to School building construction. It is very disappointing to know that none of them has been completed. We hope that Indian PM Modi's attention will be drawn toward these projects as he visits Province 2,” he added.

KATHMANDU, May 10: Preparations have been almost complete for Indian Prime Minister Narendra Modi's visit to Nepal on Friday. ... Read More...

In pictures: APF cleanses Janaki temple ahead of Modi's visit