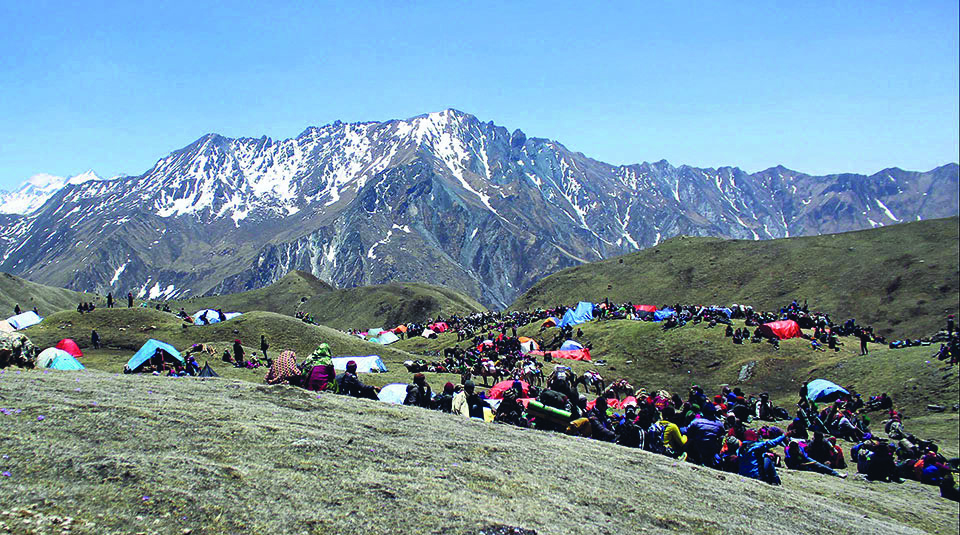 RUKUM, April 29: Birjeet Gharti of Maikot village of Putha Uttarganga Rural Municipality – 4 made half million rupees by collecting Yarshagumba back in 2011. Next year, the precious insect-herb collection fetched him a nearly equal amount. The following years, he did not turn out that lucky. "My income from Yarsha collection gradually declined over the years since then," he laments. "Last year I did not make even Rs 300,000 in total."

Every year, Gharti prepares for yarsha trip way before. Not just him, but all the members of his family accompany him as far as possible. Sometimes women, sometimes children find more Yasha than he does. The family has not become able to earn much from the transaction in the later years. Yarsha growth has slowed down, he says.

"People have realized the gradual decline in the growth of yarsha, but few are aware that they have contributed to it. While collecting yarsha, the collectors throw plastics, tins haphazardly in the mountains. Nobody cleans or disposes of them responsibly. In such a mess it's tough for Yarsha to grow." - Ramlal Jhakri, a local

"We have felt the yarsha is not growing as densely as it did earlier. They are disappearing," noted Gharti. Locals' yarsha connection is not very old. It has been nearly a decade that the people of the hills have extensively participated in Yarsha collection just like a ritual which directly adds to their economy. Considering the massive pull of people towards it, the government even formed a committee to manage it. Stating that rampant and unscientific collection of Yarsha could affect its prevalence, the committee also imposed a limitation on the volume of pick in pocket areas.

Journey to the pasture lands of Yarsha has sometimes been even deadly, with some causalities. Still, there has been no decline in the craze for collecting it. Citing smuggling of the herb, the government has restricted yarsha collection in some areas to control it. Despite the government's intervention in regulating the collection, it's effort have failed to short in issues that are affecting the herb's growth. Among these, littering plastic and human waste in yarsha areas have affected the growth of this caterpillar-fungus, locals claim.

"If you visit Patan area, which is so famous for yarsha, or any other yarsha pocket area, you will witness the extent to which they are polluted. People have littered human and plastic waste in those areas recklessly," Gharti said.

Yarsha collection trips take many days. And the travellers carry with them food, drinks, clothes. They dump the waste as they move along. "This kind of behavior is taking a toll on the growth of yarsha. It is our collective mistake," he admitted.

Ramlal Jhakri also feels the same way. After failing to make the expected amount of money through yarsha, his family's finances are dwindling.

"It was due to yarsha collection I used to pay off loans or take care of other expenses. But every new year there has been a gradual decline in the growth of yarsha here," he said. He added that the government must take serious steps for yarsha conservation without delay. "From our side, we should also assist in every way possible to conserve yarsha."

A local teacher of Maikot village remarked that not all locals have realized the need to keep the areas clean though a massive number of people from the neighboring districts are engaged in yarsha trade. "People have realized the gradual decline in the growth of yarsha, but few are aware that they have contributed to it," he noted. "While collecting yarsha, the collectors throw plastics, tins haphazardly in the mountains. Nobody cleans or disposes of them responsibly. In such a mess it's tough for Yarsha to grow!"

The sight of scattered bottles and plastics in the areas are seen these days commonly. In the lack of monitoring by the authority, the situation is only worsening.

Meanwhile, the management committee has decided that the yarsha collectors will not be provided tents. The facility of the tent is supposed to have added to the number of visitors in the areas and also added to the pollution. Such tents were not erected at Pupal, Gija and Punwang areas even last year. This year too, people would not be provided with tents.

"It is very true that the collection of yarsha has declined every new year. We need to take the reasons behind it very seriously," said Makar Gurung, chairperson of the ward – 1 of Uttarganga Rural Municipality. "This year only 55 kg of yarsha was collected from Patan area while last year, it was 90 kg," he added.

Earlier, Patan area would offer over 100 kg of yarsha in total. Except for elderly and sick people, most of the people from the adjoining district go for yarsha collection every year. Even nursing mothers reach out to the destination with babies.

"Yarsha collection matters a lot for the people here. That is the main source of income for many families. On the other hand, this plant is not found anywhere else, but here only. So we must be able to conserve it before it is destroyed," remarked Gurung, who is a member of the Yarsha Collection Management Committee. Schools in the region will remain closed for two months owing to the 'Yarsha season'.

Local reps reach out to people

TERHATHUM, Jan 5: The elected local representatives of Terhathum have expedited their visits to various wards and localities in order... Read More...