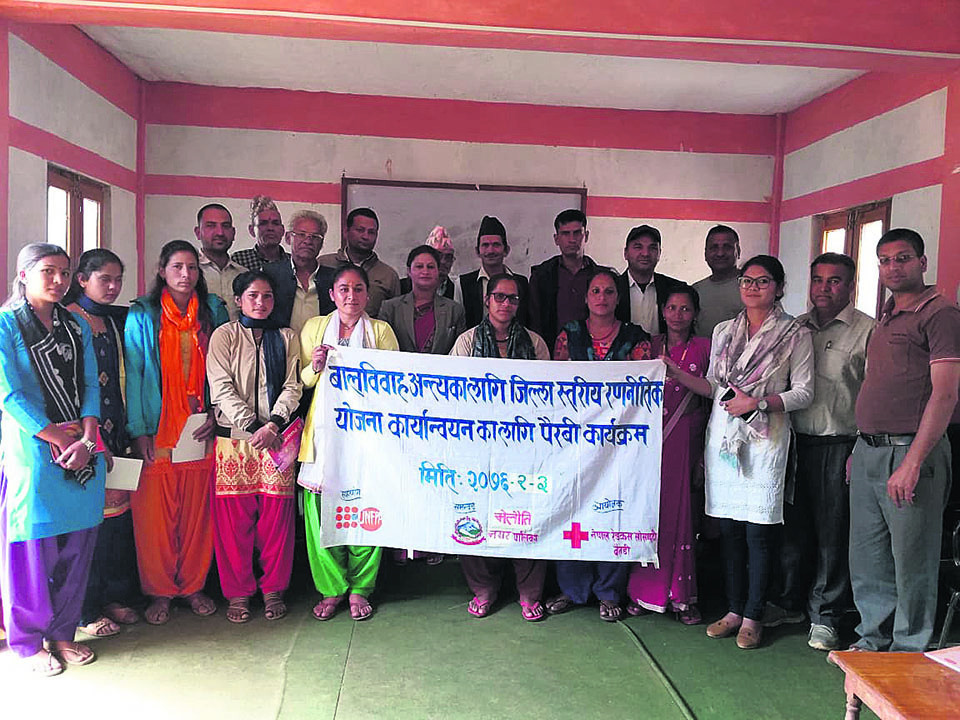 A collaborative advocacy program was organized by the Red Cross Society and the United Nations Fund for Population (UNFPA) for the elected local representatives and other stakeholders concerned. This encouraged the local governments to immediately focus on minimizing the number of child marriage cases with the aim of ending it eventually.

According to Karna Singh Saud, chief of Shivanath Rural Municipality, all local units dived into creating proper strategies after being aware about the national level and district level plans of the Red Cross and UNFPA.

As of today, the local girls of Baitadi have been forming groups with the intent of ending the ill-practice of child marriage. Kamalapati Bhatta, coordinator of the Red Cross Society's program dedicated to end child marriage informed Republica about the campaign led by the local girls. He also expressed the need for ending the social evil as soon as possible.

Chief of the girls' network in Shivanath, Suniya Parki, informed of holding discussions regarding other important social issues in addition to the prime topic in their meetings. The girls began participating in awareness campaigns after being trained with the skills set for transformation and orientation.

“Child marriage is still very prevalent in our villages,” stated Surnaya Rural Municipality's chief Bir Bahadur Bista. “It is necessary to conduct orientation and awareness programs in each and every village to change the situation,” Bista added. The influence and misguidance wrongfully associated with religion are confirmed to be the prime reason behind the practice of child marriage. UNFPA's district coordinator Ganesh Shahi talked about the urgency to change "the locals' uninformed minds for a changed future for Baitadi."

There have been incidents in the recent past where adolescents have eloped.  This has also shown the need for carrying out awareness campaigns targeting the teenagers.

Though several government and non-government organizations launched programs to control child marriage in the past three years, the number of child marriages in the district is still staggeringly high. The villages hence show the need for the implementation and enforcement of the laws and detailed orientation on the negative impacts of child marriage.

Baitadi is one of the five districts with the highest prevalence of child marriage. A survey conducted by Girls Not Brides, Nepal chapter, six years ago in the aforementioned five rural municipalities had concluded that 59.4 percent of the female population there gets married before the age of 17.

In the name of God, child marriage still has its grip in Sudur Paschim

DOTI, April 22: The legal age of marriage is 20 years. But the custom of child marriage is still prevalent in... Read More...

11 injured in road mishap in Baitadi

BAITADI, Jan 24: A total of 11 people were injured in a road accident a Seude along Satbanjh-Patan road section... Read More...