Domestic trekkers are mistreated by hoteliers in ABC trail 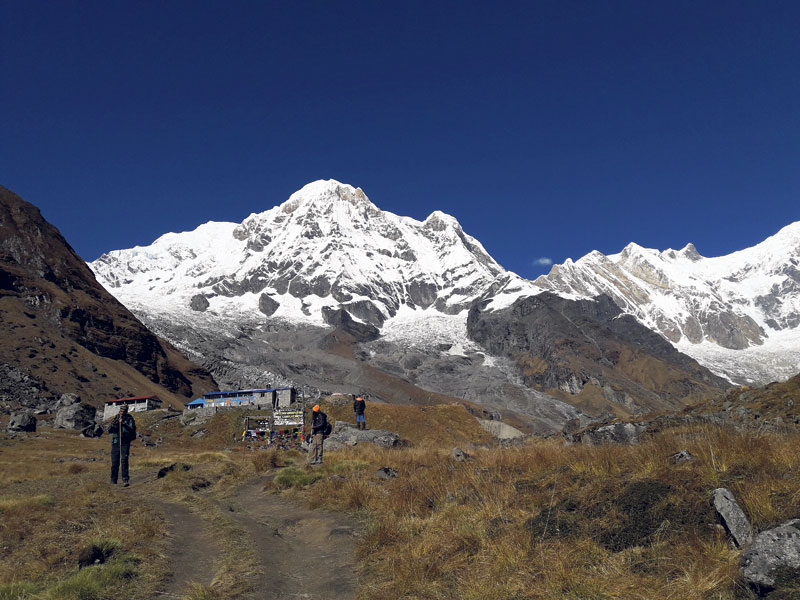 ANNAPURNA BASE CAMP, Oct 24: Trekking trails along the Annapurna Base Camp (ABC) that reaches to an altitude of 4130 meters traverse through cascading music of waterfalls, chirping of birds in the mysterious and wonderful forests amidst the background of serene snow-capped mountains. However, the local tourists traveling along the trails are the cold shoulder by the hotel owners as they get well paid by foreign tourists.

As part of its attempt to revive tourism in the country, the government of Nepal has declared 2016 as the National Tourism Year.  The government has urged internal tourists to visit various destinations to promote tourism but it has not managed anything along the routes including basic services such as primary health and help desks and packages for the tourists.

Several local trekkers along the ABC, one of the best trekking trails of the country, have to face discrimination from the hotel entrepreneurs deliberately, said many trekkers on the trail.

“The hotels do not give priority to us for providing rooms,” they said. “Even if rooms are not occupied or reserved, they ask whether we have come with foreign tourists or not,” they shared their bitter experiences.

Sheshmani Bhattarai, who is a trainer for the teachers of government schools, said that the local tourists are neglected. “We have to respect foreign visitors. But the hoteliers should not hesitate to provide rooms for us too,” said Bhattarai from Baneshwar, Kathmandu, who came for trekking with his wife Rajju.

“We don't give priority to Nepali tourists, whoever they might be. Foreign tourists are our special guests,” said the owner of Annapurna Guest House at the ABC, who did not provide his name.

Mt. Annapurna seen from Base Camp I

Alex Harper from Canada and Lazaro from Spain, who came for trekking at the ABC, said they were satisfied with the accommodation and services along the route. Though they shared rooms with other travelers, they enjoyed the trekking in the beautiful place.

In contrast, Jivan Tamang, a porter from Kaski who is involved in the sector since four years, said that the Nepali travelers are given stale food while they have to sleep in kitchen and dining hall during peak tourist season. “When it is off season, we are called by every hotel and they get angry if we don't stay at their hotel,” he said.

There are about 40 hotels and guest houses along the trail from Chhomorong to ABC , which lies between Kaski and Manang districts. About 200 trekkers reach the ABC every morning to watch the beauty of the sunrise from among the peaks of the Annapurna mountain range.

Mt. Fishtail seen from Annapurna Base Camp (All photos by Bishnu Prasad Aryal/Republica)

The Annapurna Conservation Area Project (ACAP), the state-owned project launched in 1986, charges US$ 40 to a foreign tourist to enter the ABC trekking route. However, it is yet to manage the muddy trail section from Bamboo to Deurali.

Senior mountaineering guide Lokendra Rai from Khotang, who is involved in tourism for about two decades, said that ACAP is aloof from developing the trails and providing facilities. “Neither ACAP nor hotels allow others to add rooms and open new lodges,” he said, adding, “The syndicate of hoteliers has also troubled the visitors due to their partisan interests.”

U.S. soldiers are revealing sensitive and dangerous information by jogging

BEIRUT, Jan 29:  An interactive map posted on the Internet that shows the whereabouts of people who use fitness devices... Read More...

Citizen are being ignored by state: Kedar Bhakta Mathema

Muhammad Ali's son asked, 'Are you Muslim?' by border agents

Muhammad Ali's son, who bears the boxing great's name, was detained by immigration officials at a Florida airport and questioned... Read More...

Former Nepali envoy to Pakistan no more
16 hours ago