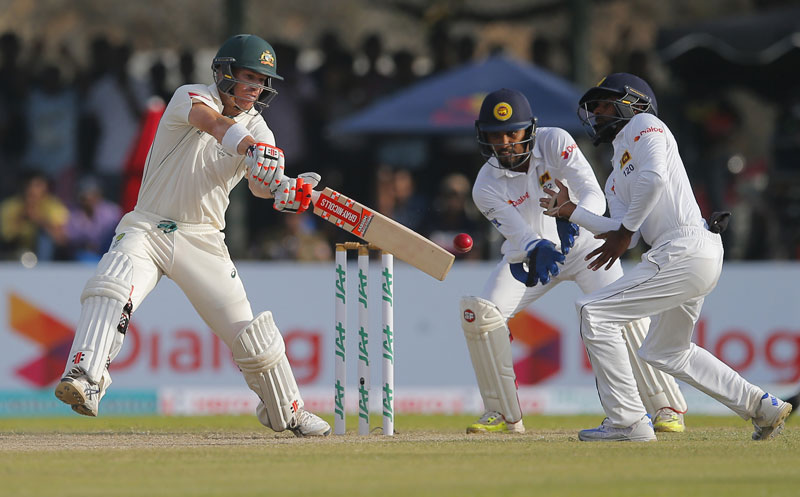 Australia's David Warner plays a shot as Sri Lankan wicketkeeper Dinesh Chandimal and fielder Kaushal Silva watch on the day one of their second test cricket against Australia in Galle, Sri Lanka. (AP)

GALLLE, Sri Lanka, Aug 4: Sri Lanka seam bowler Vishwa Fernando took a wicket from only his second ball in test cricket on Thursday as Australia reached 54-2 at stumps on the first day of an evenly balanced second test.

Fernando had Joe Burns caught by Kusal Perera, with the tourists still to score. Fernando is making his test debut in place of the injured Nuwan Pradeep.

Sri Lanka was earlier all out for 281 in its first innings and leads Australia by 227 runs.

David Warner, who showed signs of returning to form with a 41-ball 42, was dismissed off the last ball of the day — caught by Sri Lanka captain Angelo Mathews off spinner Dilruwan Perera.

Warner scored just one run in the first test which Australia lost by 106 runs in Pallekele to trail in the three-match series.

Kusal Mendis continued his good form, top-scoring with 86 for Sri Lanka and sharing 108 runs for the third wicket with Kusal Perera (49) and 67 runs with Mathews (54) after Sri Lanka slumped to 9-2.

Mendis scored 176 — his maiden test hundred — in the first test.

Starc said losing Warner close to stumps was a setback but called it a "pretty even day."

"(It) would be nice to go into stumps one down, to be honest. It's still a pretty good batting wicket. There is nothing in it for the quicks," said Starc. "Nice that (the) Sri Lankans didn't get away from us with the bat, especially the tail, a bit like they did in the first test."

Starc gave Australia a dream start, dismissing Sri Lanka opener Dimuth Karunaratne off the first delivery of the match and later having Kaushal Silva caught behind.

Sri Lanka reached lunch at 109-2 but Perera was dismissed in the third over after the interval when he was caught at slip by Australia captain Steve Smith for 49. The partnership between Mendis and Perera lasted 160 deliveries.

Mendis added 67 with Mathews before being caught behind by Peter Nevill. Mendis, who hit 10 boundaries and two sixes, had successfully reviewed a lbw decision when on 78.