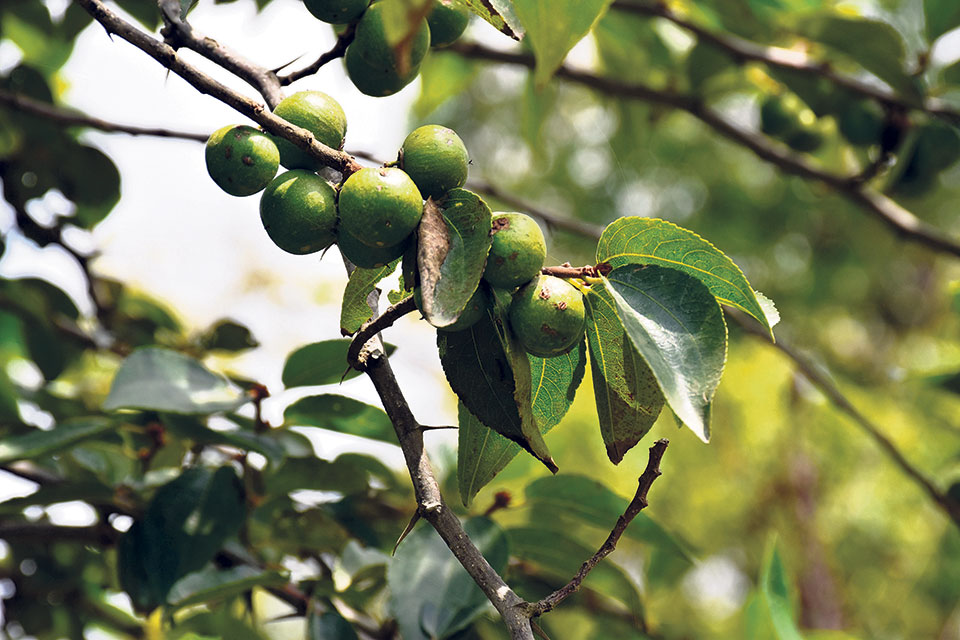 BANEPA, June 30: Roshi and Temal rural municipalities of Kavre have begun registering the Bodhichitta plants of their region. This decision was made as local farmers had to risk their lives while plucking its seeds.

The Bodhichitta plant, which is extremely popular among Buddhists, is collected and refined between mid-June to mid-October. It is between these four months that the regional collectors are most worried.

Businessmen are arbitrarily buying Bodhichitta seeds for thousands of rupees for years. “With an increased interest in buying the Bodhichitta seeds, their price has also skyrocketed.” said Dal Bahadur Lama, chairperson of Roshi Rural Municipality, adding that the unexpected rise and drop in price of Bodhichitta has also worried the farmers. Taking this matter into consideration, the village administration had decided on listing farmers and recording trees within the region.

As per the size of the seeds, a 108-seed necklace costs between Rs 5,000 to Rs 500,000. A single tree can be worth millions of rupees, and this high value has caused many to worry about safeguarding the trees. Moreover, farmers also face problems while growing, picking, and processing the seeds.

“Farmers face problems regarding protecting the seeds. So, we have decided to allot one percent of the total income to the rural municipality as to provide necessary security to the farmers whilst growing and harvesting the crops,” said Lama.

Temal Rural Municipality, the place of origin of Bodhichitta plants, has followed Roshi’s footsteps by enforcing similar rules. It is said that Guru Padmasambhav gifted the precious plant to the residents of Temal in the eighth century as a blessing. The plant is grown broadly in Sarsayukharka, Thulo Parsel, Pokhari Naraynsthan, Boldefediche, Kuruwas Chapakhori, and Mechchegaun of Temal.

“We have decided to sell each kilogram of Bodhichitta seeds for Rs 100. It has been estimated that around 6000 kilograms of seed will be produced from within the municipality,” stated chairperson of the rural municipality, Salamsingh Tamang. Even though Bodhichitta plants are grown extensively in Kanpur and Daraunepokhari of Namobuddha Municipality, unlike in Roshi and Temal, registration of farmers and plants has not yet been adopted there.

Bodhichitta, regarded as a blessing for farmers of Kavre, begins to bear fruit in March and is ripe by October. According to the quality of the tree, farmers may acquire an income worth millions. Thus, in fear of seeds being stolen from the tree itself, farmers begin sleeping underneath the trees from mid-June. On the other hand, businessmen have to pay Rs 1000 to Rs 1500 daily to safeguard the fruits once they strike a deal with the farmers.

Moreover, businessmen even pay the farmers in advance before the tree has even borne fruits. In fear of farmers changing their mind, businessmen even take the farmers and their family to Kathmandu and take care of them until it’s time to pick the seeds. Previous transactions of the seeds show that their prices are inflating due to middlemen even though farmers sell seeds at lower price.

Only a few knew about the Bodhichitta until a few years ago. With the increase of Chinese tourists in Nepal, advertisement of Bodhichitta plants has increased and Chinese customers are also on the rise. Due to this, a Boddhichitta necklace which used to be sold for a few thousand rupees is now sold for millions. As a result, the trend of stealing the seeds from trees has grown. Bodhichitta attracts attention because of its high monetary value. “Selling the plant is such an tiresome task because despite growing the plant in one’s own backyard, the seeds can’t be sold without the permission slip from the district forest office. It is difficult to protect the trees from thugs and thieves. I now hear that the rural municipalities will also be taking taxes,” said a farmer from Temal.

Bodhichitta seeds and necklaces are primarily sent to Bouddha in Kathmandu, Bodhgaya in India, and China. “Bouddha is the largest market. If unable to sell the seeds there, Temal farmers go to Bodhgaya to sell their produce,” said Suryaman Dong, a resident of Mechche and former state minister for energy.

However, in the recent years, necklaces have also been distributed in Thailand, Hong Kong, Singapore, Korea, Japan, America, Bhutan, Malaysia, Myanmar, and other Buddhist nations.

According the forest office, forty farmers of Kavre own a total of four hundred Bodhichitta trees.

Each province to have two medical colleges
41 minutes ago